Puerto Rico is advising its citizens to prepare for the Wednesday landfall of Hurricane Irma, after projections for the Category 3 storm showed it was likely to strike the territory.

The National Meteorological Service told citizens Sunday to prepare for tropical storm winds and 4 to 8 inches of rain, with the organization’s president warning it may escalate to a Category 1 hurricane, according to a statement. Since the Sunday warning, however, CBS News reported that Irma had strengthened to a Category 3 hurricane. The territory has prepared $65 million worth of provisions to care for 160,000 people expected to be affected by the storm, with more than 450 shelters around the country that can secure at least 60,000 Puerto Ricans.

The U.S. National Hurricane Center claimed the storm has a maximum wind speed of 120 mph and is moving west-southwest toward Puerto Rico at roughly 14 mph. The organization also expects Irma to further strengthen throughout Tuesday. 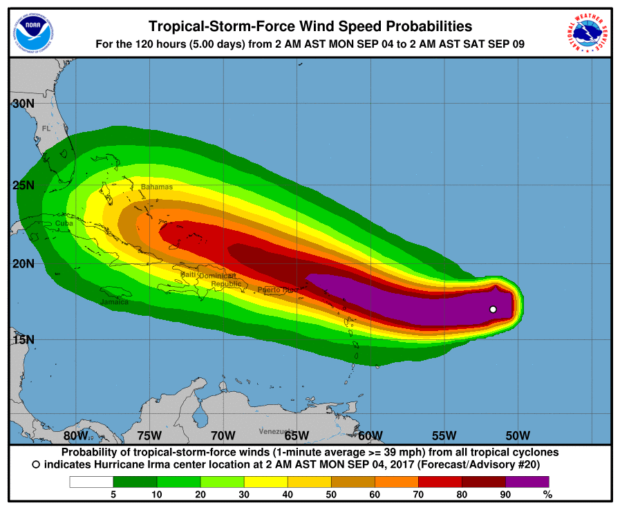 If the storm’s projected path holds, Puerto Rico will not be alone in weathering the storm, with the Dominican Republic, Haiti, and the U.S. and British Virgin Islands also in the path.

Efforts to prevent damage are well underway on the islands, with authorities removing drain blockage, pruning trees to prevent power outages, and recommending that citizens remove anything that might be thrown into the air by hurricane winds.