The Ezekiel Elliott domestic abuse investigation has only continued to get weirder.

The Dallas Cowboys star claimed in an interview with the NFL during the investigation in November, 2016 that his accuser, Tiffany Thompson, taunted him over having sex with teammate Lucky Whitehead, according to Sports Day.

Elliott: So, like I mentioned before, when Tiffany saw me doing well or just doing well without her, she did not like that and she would go through any measure to kind of ruin my moment or ruin what’s going on, and so particularly this moment was — after we had a big win verse the Steelers, and I had a very good game, and while I’m boarding the plane from Pittsburgh to Dallas, I received like 15 texts from an unknown number, and the texts were screen shots of text messages between Tiffany and one of my current teammates that play with me for the Cowboys. And then there was a picture of a hotel reservation which had her name and also his name on it. Basically, her telling me that she slept with one of my teammates the previous week while we were in Cleveland.

Q. How did that make you feel?

Q: And you felt that was another form of harassment?

This entire Elliott saga with the domestic violence allegations is unreal. He got hit with a six game suspension after the NFL found enough evidence to believe that he had beaten Thompson, but the excuses have never been dry from the star running back. 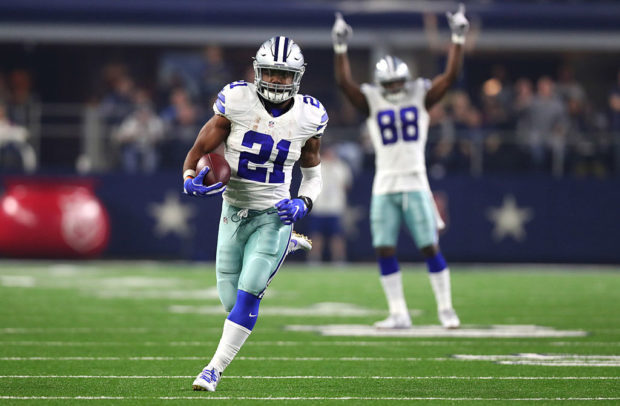 ARLINGTON, TX – DECEMBER 26: Ezekiel Elliott #21 of the Dallas Cowboys runs for a touchdown as teammate Dez Bryant #88 celebrates as the Cowboys play the Detroit Lions during the first half at AT&T Stadium on December 26, 2016 in Arlington, Texas. (Photo by Tom Pennington/Getty Images)

He has even gone so far as to suggest Thompson is a racist, claiming the police would believe her because she’s a white woman. He’s in the process of currently appealing his suspension, but he’s going to have a near impossible time of overcoming his current public perception.

The NFL learned its lesson from the Ray Rice incident, and the days of the league not being overly concerned about domestic violence are gone. The book is going to get thrown at any player if the NFL thinks there is enough evidence of domestic violence. They clearly feel that way about Elliott, and his comments about her sleeping with a teammate aren’t bound to help his case.