Doctor Who is a show widely beloved by the politically correct denizens of Tumblr. However, one of its writers is now under fire for making a series of “transphobic” remarks, quickly earning the ire of the show’s fans.

Gareth Roberts, who has written a host of memorable episodes including “The Shakespeare Code,” and “Closing Time,” made a series of remarks on September 3 that can have been considered hostile to transgender individuals. Roberts, who is openly gay, often shares conservative opinions and shares the tweets from right-leaning Twitter accounts.

“I <3 how trannies choose names like Munroe, Paris and Chelsea. It’s never Julie or Bev is it?” Roberts observed.

“It’s almost like a clueless gayboy’s idea of a glamorous lady,” he continued. “But of course it’s definitely not that.” 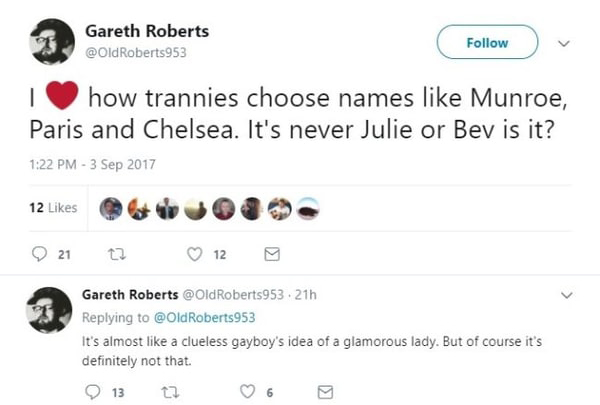 Feminist vertical The Mary Sue called the writer out on Tuesday for his observations, calling him “closed-minded and ignorant when it comes to the LGBTQIA community.” Others on Twitter were less civil.

Alongside dozens of angry responses that Roberts received on Twitter, the feminist website called the writer’s comments of being “transmisogynist (and in every other way sexist).” The writer, Teresa Jusino, remarked that she had met Roberts in person at a Doctor Who convention and that “he never struck me as the kind of person who’d say stuff like this.”

Despite receiving angry responses, Roberts remained steadfast in standing by his politically incorrect opinions. “The Rainbow People are watching my every move now lads,” he wrote in a now removed tweet.

However, anger towards the writer has not let up—and given the propensity of the “Rainbow People” to hold a grudge, it’s unlikely to dissipate any time soon.