The odds that North Korean dictator Kim Jong Un would decide to use a nuclear weapon against the U.S. or its allies are low, but, nonetheless, the possibility exists. North Korea’s growing arsenal of nuclear weapons also received a massive boost over the weekend, as the rogue regime tested what it claims was a staged thermonuclear bomb for its new Hwasong-14 intercontinental ballistic missile, which observers suspect can probably strike most of the continental U.S. North Korea revealed images of the warhead just a few hours before testing an advanced nuclear device. 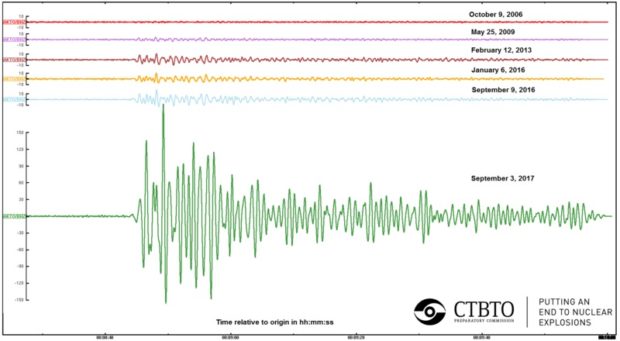 CTBTO’s preliminary assessment of the event’s magnitude was 5.8, but that figure was later revised to 6.1. The epicenter was near the North’s nuclear test site, and the organization concluded that this was an artificial earthquake.

A second event of a smaller magnitude was detected a little over eight minutes after the initial detonation. This event was not an explosion; instead, it is more likely that part of the Punggye-ri nuclear test site collapsed. In the wake of the most recent test, analysts detected signs of significant landslides in satellite images of the site.

The estimated explosive yield for North Korea’s latest nuclear test is around 150 kilotons, whereas the fifth one was somewhere around 15 kilotons. “This is a city-busting weapon,” Joshua Pollack, a senior research associate in the James Martin Center for Nonproliferation Studies at the Middlebury Institute for International Studies, previously told The Daily Caller News Foundation.

Under the weight of mounting international pressure and a noose around the neck of its economy, North Korea has surprisingly achieved in a decade what other countries have struggled to accomplish over much longer time periods. All efforts, both unilateral and multilateral, to deter North Korea and curb its nuclear ambitions have failed.

The North is on the fast track to becoming a fully-armed nuclear state with the ability to rain destruction on enemies in its region and, possibly, at even greater distances. North Korea has already declared itself a “full-fledged nuclear power in possession of ICBM as well as A-bomb and H-bomb.”

United Nations Secretary General Antonio Guterres warned Wednesday that the North Korean nuclear threat is the most serious threat in the world today. This sentiment has also been expressed by Trump administration officials, such as Secretary of Defense James Mattis, who called North Korea the “most urgent and dangerous threat” to American and international security.