Roughly two-thirds of American adults “get at least some of their news on social media,” according to Pew Research Center data.

The 5 percent uptick from 2016 isn’t due to the younger, more tech-savvy generations like millennials (or even Generation Z). News consumption from social media platforms for people ages 18-49 stayed exactly the same with 78 percent saying that’s one of their means in both 2016 and 2017. But 55 percent of people 50 years of age and older said they receive some of their news from sites like Facebook and Twitter — a 10 percent increase in just one year. 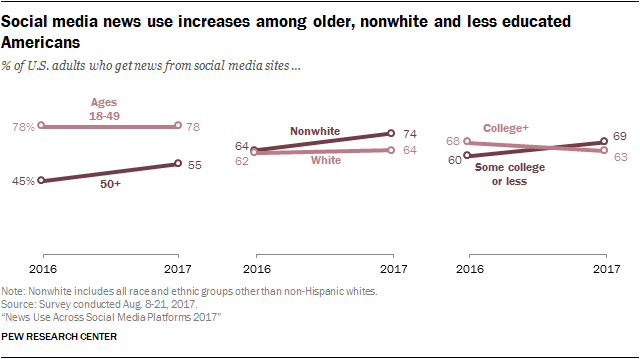 Facebook, Twitter, Snapchat, Instagram and other social media platforms, of course, don’t create their own original news stories, but do act as pathways to such content. Facebook dominates the rest of the companies in news consumption, as 45 percent say they get news on the site. Youtube and Twitter are in 2nd and 3rd place, with 18 percent and 11 percent, respectively. 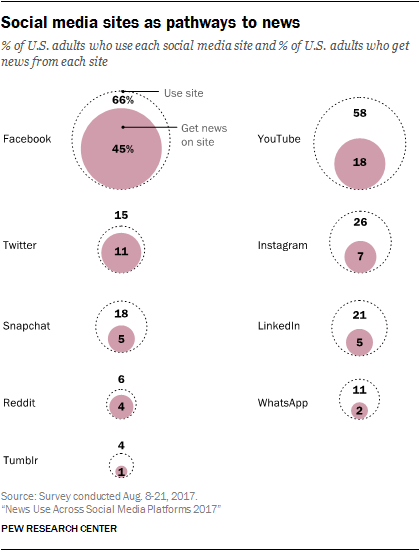 Despite the staggering difference, Twitter seems to be gaining ground, as it saw the biggest surge in news usership relative to last year (59 to 74 percent). Others, like YouTube and Snapchat, are as well, with an 11 percent and 12 percent increase, respectively. In comparison, Facebook’s rate only increased by 2 percent.

Perhaps Twitter’s upswing is due to it being President Donald Trump’s go-to means of virtual communication. (RELATED: Report: Trump Considering Hiring Lawyers To Monitor His Tweets)

Social media platforms like Twitter are often used for people to consume as many informational tidbits as possible in a short period of time. Users accompany their 140-character-or-less tweets with a link to a news story, but other users and observers often read just the brief caption and treat it as a sufficient morsel of news. The same could be said for Facebook’s trending news section. Completely false stories also make their way to the platforms.

Facebook and Twitter have been pressured to help decipher and purge news stories that are unsubstantiated for months, especially since the 2016 presidential election concluded. But automatically identifying a post as legitimate or fraudulent may be a difficult task, since subjectivity seems to be liable to even the most seemingly scientific processes.

Both Facebook and Twitter have been working with congressional investigators, according to multiple reports, on potential Russian interference on the sites. Those investigations, however, seem to center around political ads on divisive issues, not necessarily fake news.