The mystery teen who sexted with Anthony Weiner is coming forward to talk about her experience. She wasn’t willing to let Inside Edition use her name. But she did agree to go on air and talk about what happened to her.

“I was disgusted,” she told Inside Edition, which got the exclusive.

The show would not tell The Mirror how much it paid the teen to appear on the program. But previous guests who have agreed to be interviewed have raked in upwards of $1500 for an appearance.

The air date is Sept. 11, which only seems fitting since it’s the anniversary of some 3,000 people dying in a New York City terrorist attack.

Inside Edition’s Diane McInerney speaks with the teenager “whose online relationship with Anthony Weiner threw Hillary Clinton’s presidential campaign into a tailspin, and perhaps changed the course of history.”

The show agreed to withhold her name because she’s a minor. Still, viewers will see her face for the first time.

The teen says she first encountered Weiner in 2016.

“It was through a director message on Twitter,” she said. “I sent him a nice message. ‘Hello, I’m a huge fan.'”

That was all it took.

According to a release, the girl says that she contacted Weiner when his wife – Hillary Clinton’s top aide Huma Abedin – was at the peak of her influence working on the presidential campaign.

She says Weiner’s power is what attracted her to him. “I knew that Hillary Clinton would be running for president in the year 2016,” she says. “I wanted to see if Anthony was still up to the same antics.” 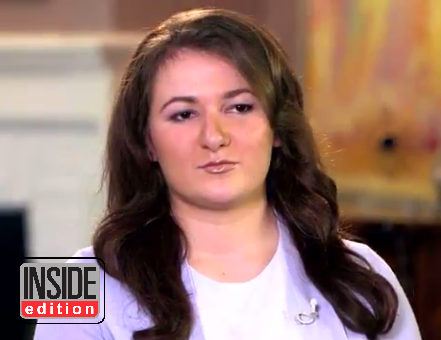 The girl says the communication quickly moved from niceties to flirting. “I knew that it was going downhill very fast,” she says. “He called me attractive.”

Other messages Weiner sent her: “You are kinda gorgeous,” “Your body is pretty insane,” and “I thought about you this AM.” According to Inside Edition, some of the messages are “so obscene” they can’t be shown on TV.

It was over Skype one day that things took a sharp wrong turn and Weiner the perv asked her to undress.

The girl explained that the the former congressman would send her photos showing him bare-chested, including a shirtless photo with his young son which the teen found “particularly upsetting.”

She says, “I was disgusted. That was part of the reason I came forward.”

The FBI came to the girl’s home in September 2016 with a subpoena and “collected all of her electronic devices and any messages pertaining to Anthony Weiner.”

In the meantime, FBI took all of Weiner’s gadgets, including a infamous laptop used by his wife, Abedin. This is when emails relating to Hillary Clinton were found, “which led FBI Director James Comey to reopen the investigation into Clinton’s private email server, just eleven days before the presidential election.”

The experience has been overwhelming. She says her family has moved to another town and she’s now being homeschooled.

Sure hope she enjoys that fat paycheck from Inside Edition.