Our second week of college football is officially over, and it was one for the ages.

There are lots of different things we could break down from Saturday. However, I’ll stick to my four biggest observations.

1) Ohio State has some serious problems. 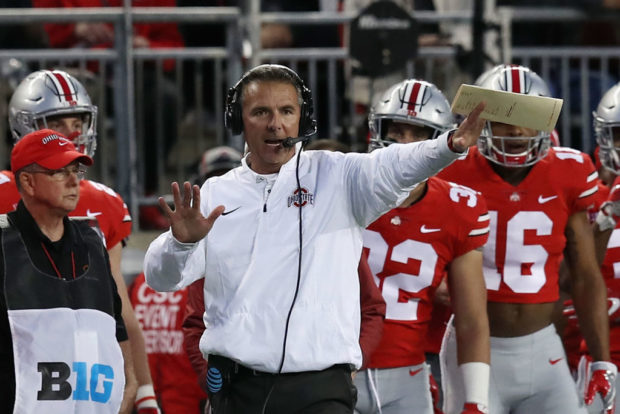 COLUMBUS, OH – SEPTEMBER 09: Head coach Urban Meyer of the Ohio State Buckeyes stands on the sideline during the first half against the Oklahoma Sooners at Ohio Stadium on September 9, 2017 in Columbus, Ohio. (Photo by Gregory Shamus/Getty Images)

The Buckeyes got exposed Saturday night against Oklahoma. Their secondary got torched by Baker Mayfield, and the passing game was pathetic. J.T. Barrett has always been dogged by the belief he’d never turn into a solid downfield passer. Well, last night he proved all of his critics correct. OSU fans better hope this was just a one-time slip up because if this is the real Buckeyes team there will be serious problems in Columbus. 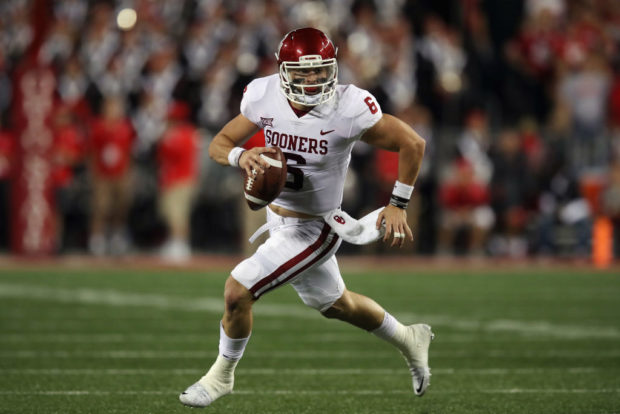 COLUMBUS, OH – SEPTEMBER 09: Baker Mayfield #6 of the Oklahoma Sooners runs with the ball during the first half against the Ohio State Buckeyes at Ohio Stadium on September 9, 2017 in Columbus, Ohio. (Photo by Gregory Shamus/Getty Images)

Oklahoma star quarterback Baker Mayfield had himself a night against the Buckeyes. He threw for nearly 400 yards and he tacked on three touchdowns. He was surgical against Ohio State. Mayfield might be my favorite for Heisman if the vote were held this morning.

3) Georgia should be embarrassed with their post-game celebration. 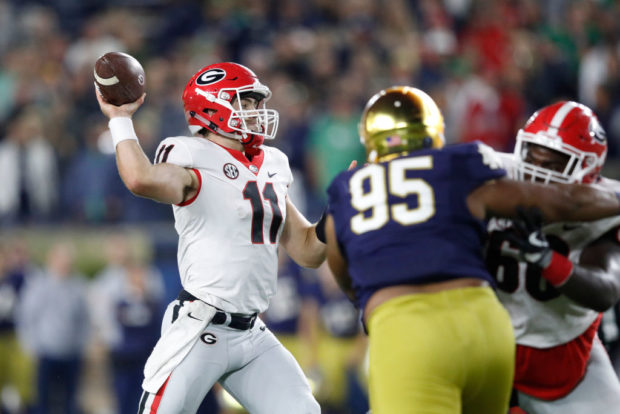 SOUTH BEND, IN – SEPTEMBER 09: Jake Fromm #11 of the Georgia Bulldogs throws a pass in the fourth quarter of a game against the Notre Dame Fighting Irish at Notre Dame Stadium on September 9, 2017 in South Bend, Indiana. Georgia won 20-19. (Photo by Joe Robbins/Getty Images)

Georgia beat Notre Dame by a point last night, and their celebration after the game is proof how far expectations have fallen for the program. Notre Dame won four games last season, and yet, the Bulldogs behaved like they just won the national championship. Is this how little Georgia expects out of themselves? Beat a rundown Notre Dame team by a point and it’s time to celebrate? If I was Georgia’s coach they’d be running sprints until they got it through their heads that they should expect much more than beating Notre Dame.

4) Bret Bielema might finally be on the hot seat. 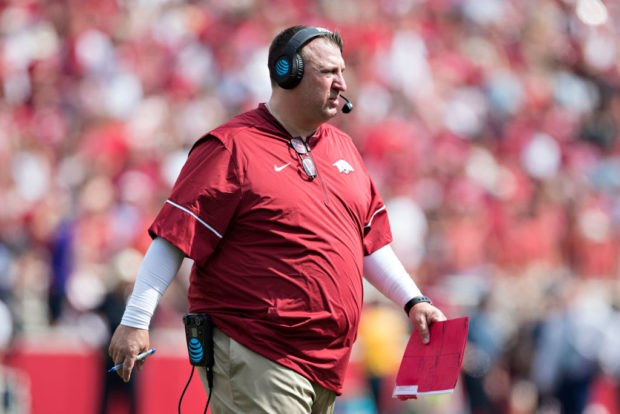 FAYETTEVILLE, AR – SEPTEMBER 9: Head Coach Bret Bielema of the Arkansas Razorbacks walks off the field during a game against the TCU Horned Frogs at Donald W. Reynolds Razorback Stadium on September 9, 2017 in Fayetteville, Arkansas. The Horn Frogs defeated the Razorbacks 28-7. (Photo by Wesley Hitt/Getty Images)

Bielema and the Arkansas Razorbacks got blown out 28-7 at home against TCU. It’s unlikely he’s going to get fired this season, even though the program might not win more than five games. It appears fans are finally opening their eyes to the disaster that has been the reign of Bret Bielema in Fayetteville.