Watt ran onto the field carrying a Texas flag, and the stadium went wild.

JJ Watt taking the field for the first time since #HurricaneHarvey will give you chills! pic.twitter.com/wJcR2dcywg

Watt has done an incredible job of raising money for the victims and recovery efforts after Hurricane Harvey. He has already raised $30 million for the people of Texas. His initial goal was only $200,000. 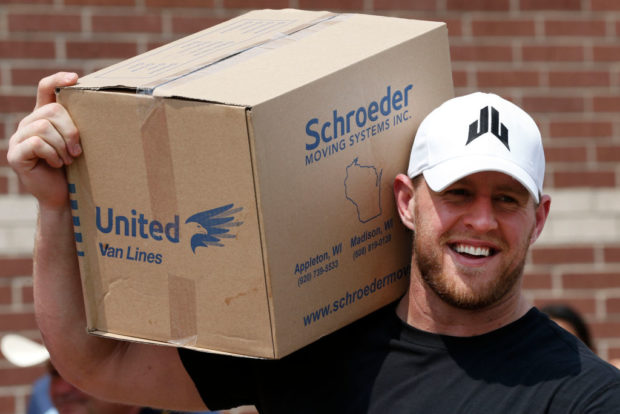 HOUSTON, TX – SEPTEMBER 3: (AFP OUT) Houston Texans defensive end J.J. Watt holds a box of relief supplies on his shoulder while handing them out to people impacted by Hurricane Harvey on September 3, 2017, in Houston, Texas. Watt’s Hurricane Harvey Relief Fund has raised more than $18 million to date to help those affected by the storm. (Photo by Brett Coomer – Pool/Getty Images)

The defensive monster is a reminder of what is great about sports. People from all over America came together and raised a lot of money to help the people who need it the most. Well done Watt, well done.