The U.S. and North Korea seem to be moving toward a dangerous military confrontation, which undoubtedly would spread destruction and devastation across the Pacific.

President Donald Trump and other members of his administration have said repeatedly that “all options are on the table” when it comes to North Korea, including the application of military force.

“Military action would certainly be an option. Is it inevitable? Nothing is inevitable,” Trump explained Thursday. “I would prefer not going the route of the military, but it is something that certainly could happen.”

Tensions are on the rise, and so are the odds that the U.S. and North Korea could find themselves in a fight that could quickly escalate to nuclear war and bring about the deaths of millions.

“When I was in government, when we ran war games, the estimates were hundreds of thousands of casualties, and that was before we thought North Korea had nuclear weapons,” Bruce Klingner, the former chief of the Central Intelligence Agency’s Korea branch and now a senior research fellow for Northeast Asia at the Heritage Foundation’s Asian Studies Center, told The Daily Caller News Foundation.

Secretary of Defense James Mattis has said that such a conflict would be “catastrophic” and “tragic on an unbelievable scale,” arguing that it would be a war “that we fundamentally do not want.” Mattis has previously said that the U.S. and its allies would certainly emerge victorious, but at “great cost.”

North Korea is unlikely to strike first, as the country’s aim is and has been deterrence to ensure regime survival. North Korea gains nothing and loses everything by starting a war it cannot win. The North’s leadership, regardless of its brutality, has demonstrated time and time again its rationality, which is to say it acts in accordance with its own self-interest. 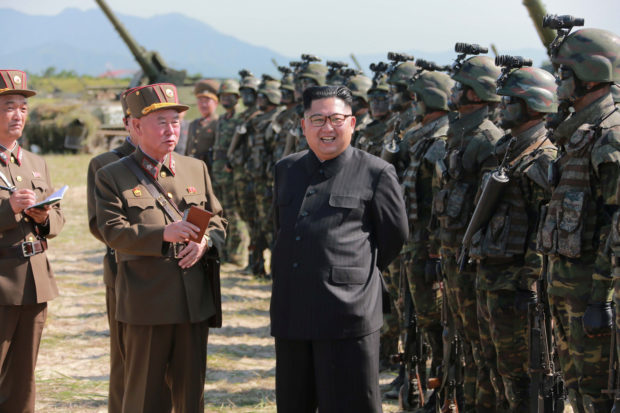 North Korean leader Kim Jong Un guides a target-striking contest of the special operation forces of the Korean People’s Army (KPA) to occupy islands in this undated picture provided by KCNA in Pyongyang on August 25, 2017. KCNA via Reuters

What happens when the shooting starts?

An armed conflict would mean the end of the Kim regime, meaning that North Korean dictator Kim Jong Un would throw everything the regime has into the fight. Kim can be expected to pursue unrestricted warfare, including the use of chemical, biological, and nuclear weapons.

North Korea can be expected to open fire on military bases and population centers in South Korea with its massive artillery force.

Seoul, located only 35 miles from the Korean border and home to a metropolitan population of approximately 25 million, is within range. The North is believed to have tens of thousands of artillery and air defense guns, and while some have suggested that many of these units are in disrepair, North Korea has demonstrated its ability to launch a massive artillery strike on multiple occasions, most recently in late April to mark an important military holiday.

Artillery pieces are seen being fired during a military drill at an unknown location, in this undated photo released by North Korea’s Korean Central News Agency (KCNA) on March 25, 2016. REUTERS/KCNA/File

In the event of a renewed conflict, the North might also deploy chemical weapons, using persistent agents along the forward-edge of the battlefield and non-persistent agents on key ports, bases, and towns in South Korea.

At the same time, North Korea can also be expected to use the ballistic missiles it has been developing at an accelerated rate under the watchful eye of the young marshal. North Korea has an arsenal of missiles ready for each potential target.

North Korea also has anti-ship cruise missiles and surface-to-air missiles that could potentially be used against enemy ships and aircraft.

The locations of many of North Korea’s deployed missiles are unknown. Many are road mobile, and some can be launched with little to no warning. (RELATED: Top US General: US Not Confident It Knows Where North Korea’s Deployed Ballistic Missiles Are)

The allies should expect the use of nuclear weapons early on as North Korea would need to use them quickly or risk having this capability knocked out. North Korea claims to possess both traditional fission bombs (atom bombs), as well as fission-fusion bombs (thermonuclear hydrogen bombs). The North successfully tested the latter recently after releasing images of the warhead it intends to mount on its new Hwasong-14 ICBM, which observers estimate can strike parts, if not most, of the continental U.S. While its predecessors produced explosive yields of around 10 kilotons, North Korea’s latest nuclear device produced yields around 150 kilotons, according to the U.S. government. That is a bomb built for the destruction of cities. (RELATED: What Does A North Korean Nuclear Strike Look Like For America’s Biggest Cities?)

North Korean ground forces would also be surging forward, possibly through intricate and fortified networks of underground tunnels, while naval and aviation units aid the advance and prevent an invasion of North Korea’s territory. North Korea has an estimated 1.2 million soldiers in its military, with 600,000 in reserves and six million in its paramilitary reserves. 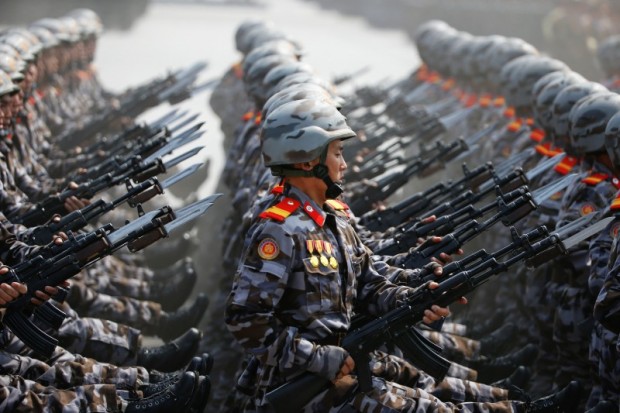 And just in case that isn’t enough, North Korea would likely use its cyber warfare capabilities to target critical infrastructure and emergency support systems in South Korea, as well as the broader allied defense network if possible.

The North has launched global malware attacks, stolen millions of dollars from banks, disrupted overseas networks, and even breached the secure systems of the South Korean defense ministry.

“While I would not characterize them as the best in the world, they are among the best in the world and the best organized,” Army Gen. Vincent Brooks, commander of U.S. Forces Korea, told the Senate last year. North Korea’s capabilities likely extend well beyond the Korean Peninsula.

What are the allies bringing into the conflict?

The short answer is the most powerful conventional and nuclear forces in the world.

The U.S. has strategic military assets scattered throughout the Pacific, from stealth fighters in Japan to various Army units in South Korea, from nuclear-capable and conventional bombers in Guam to nuclear-armed ICBMs on the mainland. The U.S. military also has elite naval assets armed with ballistic and cruise missiles.

Additionally, the U.S. also has approximately 75,000 troops in South Korea and Japan.

South Korea has roughly half the number of troops that its northern neighbor possesses, but it has 4.5 million troops in reserve and three million in its paramilitary reserves. The South has its own air force and naval assets, as well as a strategic rocket force with its own ballistic missiles. South Korea’s new Hyunmoo II ballistic missile has a range of about 500 miles, giving the South the ability to strike anywhere in North Korea, and South Korea is preparing to arm its missiles with heavier warheads to penetrate hardened enemy defenses, such as the more than 7,000 underground bunkers scattered throughout North Korea.

Japan has a well-armed self-defense force with increased operational freedom, and Australia would likely provide additional support. Japan and South Korea do not possess nuclear weapons of their own, but they are protected under the U.S. nuclear umbrella.

“The U.S. conventional and nuclear forces, as well as South Korea and Japan’s forces, greatly outstrip North Korea in terms of technology,” Melissa Hanham, a senior research associate in the James Martin Center for Nonproliferation Studies at the Middlebury Institute for International Studies, previously told TheDCNF. North Korea does not have the resources for a prolonged fight. Its forces are malnourished and, in many cases, ill-equipped for sustained combat.

Allied forces would tear across North Korea, crippling the country’s ability to fight but likely suffering significant casualties along the way.

To counter North Korean ballistic missiles, the allies would put their various antimissile systems into action. In South Korea, there are Patriot (PAC-3) systems and a collection of Terminal High Altitude Area Defense (THAAD) batteries. The Japanese use the Patriot system as well, and both South Korea and Japan are protected by Aegis ballistic missile defense ships. THAAD protects Guam, and the continental U.S. is defended by ground-based midcourse defense (GMD) systems. 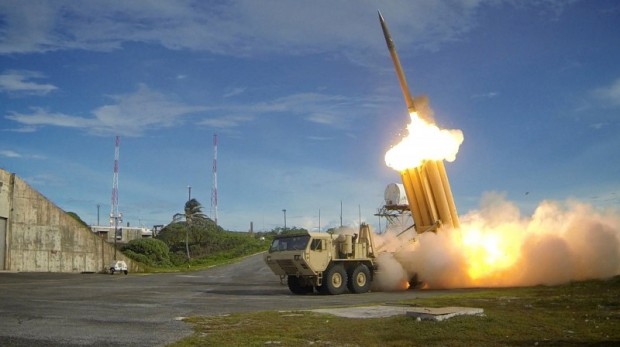 While these systems have performed well in recent tests, most have never been tested in combat.

“People think missile defenses are a magic wand. They aren’t,” Jeffrey Lewis, the director of the East Asia Nonproliferation Program in the James Martin Center for Nonproliferation Studies, told TheDCNF.

There is always the possibility that something will slip through, especially given the spotty overall performance record of the GMD system.

“Let us say that there is someone on the other side of a large room shooting at you, and you are shooting back,” Hanham previously explained to TheDCNF. “Maybe you could ricochet one of the bullets if you are an excellent marksman, but you are still going to get hit with other bullets. In the best case scenario, [missile defenses] could protect some places some of the time. They could reduce casualties, but it’s not a force field.”

South Korea also has its own artillery, as well as artillery-detecting radar to help the allies pinpoint enemy artillery for counterstrikes. Neverthless, North Korean artillery can be expected to cause significant damage before it can be eliminated, particularly because North Korea excels at concealment, disguise, and deception.

It is difficult to know how China might respond. Beijing has grown frustrated with Pyongyang, but there are also high levels of friction between Beijing and Washington as well as Seoul and Tokyo. A Chinese state-run tabloid recently suggested that if North Korea starts a war, it is on its own. The paper also warned that if the U.S. and its allies start an unprovoked war against North Korea, China will send its forces to intervene on behalf of its old ally.

North Korean soldiers chat as they stand guard behind national flags of China (front) and North Korea on a boat anchored along the banks of Yalu River, near the North Korean town of Sinuiju, opposite the Chinese border city of Dandong, June 10, 2013. REUTERS/Jacky Chen

As a single article in a highly nationalist tabloid is hardly the foundation for comprehensive policy analysis, how China would react to a renewed conflict on the peninsula remains unclear. What is clear though, is that China’s strategic interests are quite different from those of the U.S. and its allies, and that discrepancy would play a role during the course of a war and in post-war reconstruction.

What happens after the war is over?

In addition to playing a trying game of “find the nuclear weapons and ballistic missiles before proliferation begins,” the U.S., South Korea, Japan, and any other participants would need to start reconstructing the Korean Peninsula. During this period of instability, allied troops might encounter guerrilla fighting and possibly even acts of terrorism, as the desire to fight until the bloody end is instilled in each North Korean at an early age. Ending the fighting and rebuilding the Korea Peninsula are processes that would take several decades to complete.

Is the world ready for this war?

The damage, in terms of loss of life, overall destruction, and impact on the global economy, would surely be significant. This would be a war like nothing that has been seen before. The North Korean people have been preparing for this war for decades, and they have been expecting such a conflict since they were children.

The military option is clearly on the table, but American, South Korean, and Japanese officials are hesitant to travel down that path, calling for a diplomatic solution instead. The most likely reason for their hesitancy is that the alternative would be horrific.