Bush paid a visit to the remains of the Twin Towers three days after the deadly terrorist attack, which killed thousands.

He stood on the rubble with a bullhorn and addressed the first responders, delivering one of the most famous lines in presidential history when somebody shouted out they couldn’t hear his speech.

“I can hear you! The rest of the world hears you! And the people who knocked these buildings down will hear all of us soon,” Bush told the crowd.

It doesn’t get more inspiring than Bush with a bullhorn raising the spirits of the first responders as the crowd cheers for him. 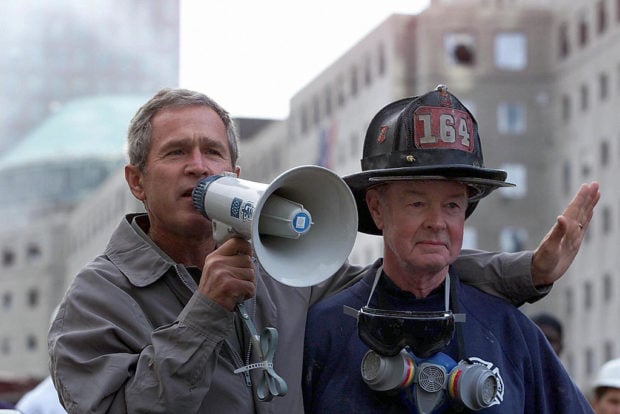 NEW YORK, NY – SEPTEMBER 14: US President George W. Bush (L), standing next to retired firefighter Bob Beckwith, 69, speaks to volunteers and firemen as he surveys the damage at the site of the World Trade Center in New York in this 14 September 2001 file photo. Bush was presented with the same bullhorn he used to address the rescue workers in this photo at a ceremony 25 February 2002 in the Oval Office of the White House in Washington, DC which was attended by Beckwith and New York Governor George Pataki. The President said the bullhorn would be put on display at his father’s Presidential Library. (Photo credit should read PAUL RICHARDS/AFP/Getty Images)

An incredible moment during one of the worst times in American history.

People were very nervous about what would happen in the future, or if America would bounce back. Well, I think it’s safe to say Bush’s words gave everybody some hope and comfort.