A MUSHROOM-HUED TWEED LOVESEAT IN OHIO — Hello and welcome to “We Watch Reliable Sources So You Don’t Have To.” My name is not Brian Stelter. If it was, that might be a little off-putting. We have a lot to get to on this show.

So let’s get right to it.

Brian doesn’t look like he went on a high-carb bender this week. But he is feasting — as he always does — on President Trump’s “errors and exaggerations.” That’ll be the topic of Brian’s essay. Which we will be tortured by later in the show.

“Maybe we should call this what it really is – it’s media bashing of another color,” Brian opined.

Right off the bat, he can’t seem to fathom why the White House would “embrace” this fight. (Really?! Has he been slumbering for the past year?)

It’s time for the “all-star” panel.

There’s Britt McHenry, who was canned from ESPN in April and is now at The Federalist. (The network let some 100 employees go. Still, Britt says ESPN fired her because of her political views.) We’ve got The Mirror’s BFF and race baiting national journo Wesley Lowery, who works at WaPo, and USA Today sports writer Christine Brennan. Lowery and Brennan are both CNN contributors

“Is there something just petty about this?” Brian asks, guiding his interview subjects to delight in his favorite pastime: Crushing the White House.

Brennan: “This is the world we live in. That’s why we have to be so careful. …The Presidency of Donald Trump has shaken all of us. …Trump is out there in a way that no other president has ever been.”

Brian makes a whopper of a suggestion – that this whole thing was ginned up by the conservative media.

For this, we turn to Britt.

“I don’t think this was a controversy,” she said.

“As you know, I used to work there so I have experience being there and just knowing the conduct policy. What really agitated a lot of people was the inconsistently of treatment.”

She said ESPN does not handle personnel matters fairly.

“This did violate their conduct policy,” she added. “I had something in my personal life…an argument that was put out there. I was suspended for a week without pay.”

She said ESPN viewers are going to rightfully take a step back and say, “Wait a minute, where’s the fair treatment there.”

When Brian suggested that a lot of sports world people are trying to “brand” themselves with politics, Brit emitted a brief chuckle and claimed she’d always been Republican but was not allowed say certain things at ESPN.

Jemele was never suspended for her remarks. She did express regret. But she appeared on air the next day.

“Is this an acceptable thing to say in a public dialogue or not?” Wesley says, framing the discussion.

Wesley, who apparently thinks he oversees all media outlets in the history of mankind, says Jemele is a commentator and has every right to state her opinions. “Journalists aren’t people who only care about the one thing we write about,” he says. “We’re human beings.”

Yeah, and most human beings, when asked by police to leave a McDonald’s in a rioting area in Ferguson, don’t stay and fight with the cops.

Wesley says “to handcuff” commentators like Jemele shows some inconsistency.

He is wearing one of those priest collar shirts. It is Sunday. But it’s not my preference. More formally, it is called a “banded collar” or “tab collar” dress shirt. Still, Wesley looks more polished than he has in other TV appearances. His shirt is crisp and white and he pairs it with a dark blazer and white pocket square.

He may want to watch that potential unibrow inching between his eyebrows.

Speaking of his brows, they’re furrowed. Wesley half smiles just once during his entire TV hit.

Next up: Time to bash White House Press Secretary Sarah Huckabee Sanders for using a press briefing to say that ESPN ought to fire Jemele Hill.

Nancy Gibbs, outgoing editor for TIME, says if White House reporters were to tweet what Jemele did, it would be a real problem.

Michael Oreskes, head of News at NPR, says, “The White House does not make social media policy for any news organization,” which Brian thought was so funny.

He’s got a curly tuft of rusty-blondish hair sticking up from his balding do. It’s not that distracting. But it’s certainly noteworthy.

Oreskes continued, “Twitter is a specifically difficult problem ‘cause it invites pithy to the point of there’s nothing there but a statement. …The heart of journalism is showing how you got to whatever your conclusion is. The problem with that tweet [is] it was a conclusion without any background at all.”

The Daily Beast’s Spencer Ackerman is on today. Like Wesley, he’s a scruffy-faced lad. Unlike Wes, he’s styled himself in a more traditional-styled lavender button-down and medium gray blazer.

Unfortunately, viewers can see a disturbing thatch of chest hair peeking out of his no-tie ensemble. So maybe Wesley was onto something with his priest collar.

The topic is dull – it’s Special Prosecutor Robert Mueller obtaining a search warrant for Facebook info in relation to his investigation on whether Trump colluded with Russia during the 2016 presidential election.

Brian looks utterly bored (or maybe I’m bored and I’m projecting my emotions onto Brian). He let’s Ackerman rattle on. I’m not going to actively bore you with all of it.

“Facebook has a ton of data that can help investigators sift through and figure out how genuine these connections are,” he said.

And that’s enough of that.

Onward to Hillary Clinton shitting on the press for its campaign coverage.

“Was it fair?” Brian asks earnestly.

On the show is Amy Chozick, a reporter for the NYT. She has a nice ombre going on — dark brown to a honey blonde on the southern portion of her locks. Her bright red shirt paired with a dark blazer pops on TV. 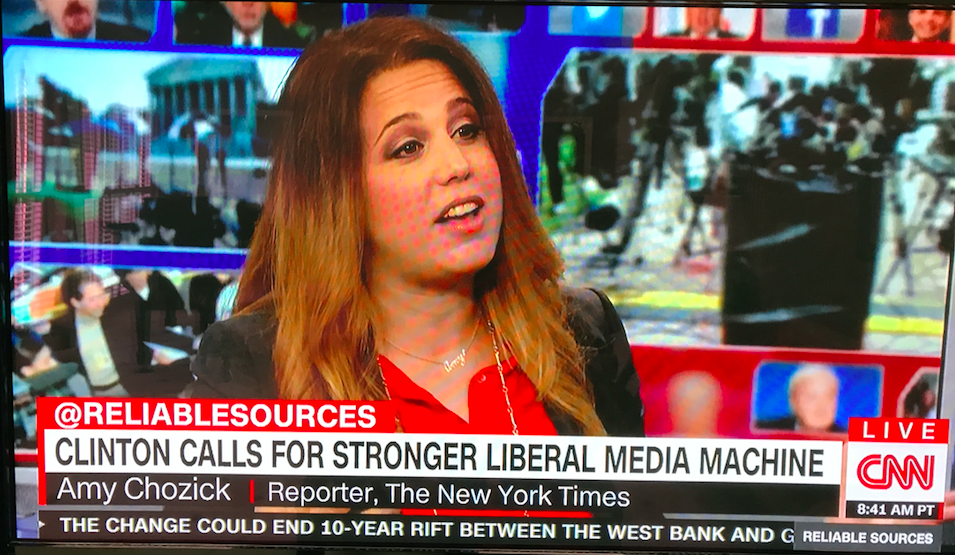 She says reporters are no good at analyzing themselves. “We know the media hates to scrutinize itself,” she says. Stelter laughs.

Chozick insightfully says you have to go back to the 90s in order to square Clinton’s criticism of the press – her husband’s extramarital relationship with Monica Lewinsky, Whitewater, and so forth.

Chozick says Clinton was not good at changing the conversation when she didn’t like it. She said they said “no” to a lot of interview requests on other matters she may have preferred.

Which means this week’s program is NEARLY OVER.

Brian highlights a BuzzFeed story on a White House that leaked a memo about leaks. Ha ha ha ha – isn’t this so funny?

Gibbs is leaving TIME. Brian wants to know why.

“I’ve had a blast!” she exclaims, noting that journalists love a good conspiracy theory.

She says it’s time for her to figure out what’s next – maybe writing, maybe teaching.

As the show winds down, it’s time for Brian’s essay on Trump’s screw-ups – a topic he has personally made a centerpiece of his show for months.

Keep in mind: There are less than 3 minutes remaining.

So he won’t have that much time to blather on.

“Let me show you what the Trump’s credibility crisis looks like on a daily basis,” he says. “This is President Trump seemingly making up a poll the other day.”

There is no poll that 92 percent of the country agrees on DACA, he explained.

And then Trump made up news about the weather.

Brian says he’s aware that this may sound like nitpicking.

“It’s the pattern,” the host says. “Sometimes Trump is sloppy. Other times he’s downright deceitful.” (Hmmm….this sounds a lot like a certain host I know whose name rhymes with Swelter.)

Brian closes the show by ministering to newsrooms to keep “fact-checking” and to keep making time to cover Trump’s “misstatements.”

I don’t think the media is in danger of giving Trump an easy ride or of Trump not taking digs at the media whenever the wind blows.