The bombshell report that U.S. investigators conducted surveillance against former Trump campaign chairman Paul Manafort before and after the presidential election has touched off a debate over whether President Trump was correct when he claimed that his predecessor, President Obama, ordered his “wires tapped.”

Trump infamously made that accusation in early March in a highly controversial tweet.

“Terrible! Just found out that Obama had my ‘wires tapped’ in Trump Tower just before the victory. Nothing found. This is McCarthyism!” Trump wrote.

Trump was widely criticized for the comment, which was accompanied by no additional context or information. His defenders attempted to dilute the comment, suggesting that Trump was speaking generally about the Obama administration conducting surveillance on his presidential campaign for political purposes. (RELATED: BOMBSHELL: Feds Wiretapped Paul Manafort Before And After The Election)

Trump has since stopped discussing wiretapping, but CNN’s report could renew the Republican’s interest in the topic.

The network reported on Monday that U.S. officials probing possible collusion between the Trump campaign and Russian government obtained a Foreign Intelligence Surveillance Act (FISA) warrant on Manafort at some point last year. The surveillance lasted through early this year, when Manafort was said to still be in touch with Trump.

According to CNN, investigators picked up communications from Manafort which suggested that he might have encouraged Russian operatives to meddle in the campaign. Two of the network’s sources cautioned that the intelligence was inconclusive.

Though the report could bode poorly for Manafort and Trump — if Manafort’s communications show collusion — some conservatives cited the CNN report as a vindication for Trump.

“The overwheming evidence is that Trump was also under surveillance, as he claimed overlapping with the time Manafort was being monitored,” Stone told The Daily Caller.

“The fruits of the surveillance,” Stone said, “were used for political purposes” against Trump.

But there has been plenty of pushback against the idea that Trump’s wiretapping claim was accurate.

“Nothing in this report vindicates Trump’s claims that he or Trump Tower were wiretapped,” a group of prominent national security bloggers wrote at Lawfare.

The bloggers noted that nothing in the new report indicates that Trump was directly wiretapped or that Obama ordered it.

Besides questions about the accuracy of Trump’s tweet, the CNN report raises new questions about why and when the FBI began targeting Manafort, who joined the Trump campaign in May and was fired in August.

As for why investigators sought the warrant, Ed Henry, a reporter at Fox News, cited sources who claimed that the uncorroborated dossier of research compiled by former British spy Christopher Steele may have been a catalyst for the FISA application.

Henry reported that the warrant was obtained “after the FBI embraced some of the details of that Russian dossier of then-President-Election Trump that has since been discredited.”

His unnamed sources also said that the federal judges who approved the warrant “are privately miffed” that the Manafort warrant was tied to the dossier, which was funded by a political ally of Hillary Clinton’s.

If Henry’s report is accurate, Manafort would be the second Trump campaign figure for whom the dossier was used to obtain a FISA warrant.

It has been reported that investigators cited the 35-page dossier in an application for a FISA warrant against Carter Page, an energy consultant who served as a volunteer on Trump’s campaign foreign policy team.

In the dossier, Steele cites a source who claimed that Manafort and Page were part of  “a well-developed conspiracy of co-operation” between the Trump campaign and Russian leadership to help Trump win the presidency. Manafort “managed” the effort, using Page and others as intermediaries, Steele wrote in a memo dated sometime in late July.

The FBI reportedly opened its investigation of the Trump team at around that time. Steele had reportedly provided copies of reports in the dossier to FBI agents he knew from previous spy projects. 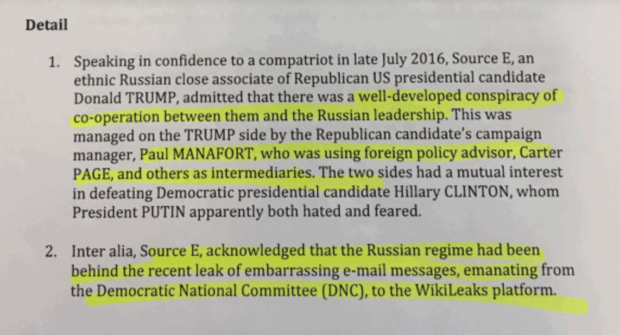 Passage from the Christopher Steele dossier

But both Page and Manafort have vehemently denied the allegations in the dossier. They also deny even knowing each other.

Page first denied knowing Manafort during an interview with CNN’s Jake Tapper in April. He reaffirmed that denial to TheDC on Monday but declined to comment further on the Manafort news.

The possibility that the dossier served as the basis for the FISA warrants against Manafort and Page raises the stakes for the controversial document. Republican lawmakers have started questioning how significant the dossier was to the FBI’s collusion investigation and how extensively investigators vetted the claims made in Steele’s reports.

1
'Don Jr. Better Not Get Close To Me': Democratic Congressman Appears To Threaten Trump Jr.
Politics
2
Judge Dismisses Lawsuit Against FBI Informant Used In Trump Probe
US
3
Joe Biden Says He 'Became A Professor' After Leaving White House — He Never Taught A Class
Politics
4
Traveler 'Cleared' Of Coronavirus Appears On Fox News, Coughs On Child While Saying 'It Is Contagious'
Media
5
Video Shows Drag Queen Suggestively Crawling Up To A Child As Adults Cheer And Celebrate
Politics