A double-action-only variation of the original P290, the SIG P290RS offers shooters a reliable and compact pistol, with the peace of mind of re-strike capabilities.

A year after its introduction, SIG’s smallest 9mm gets some meaningful design changes.

The guns I call “slim-nines,” 9mm carry pistols made thin and ultra-compact, are a hot item today. SIG’s entry is the P290. I first saw it in the fall of 2010 at the IACP (International Association of Chiefs of Police) conference. It was introduced in January 2011 at the SHOT Show. 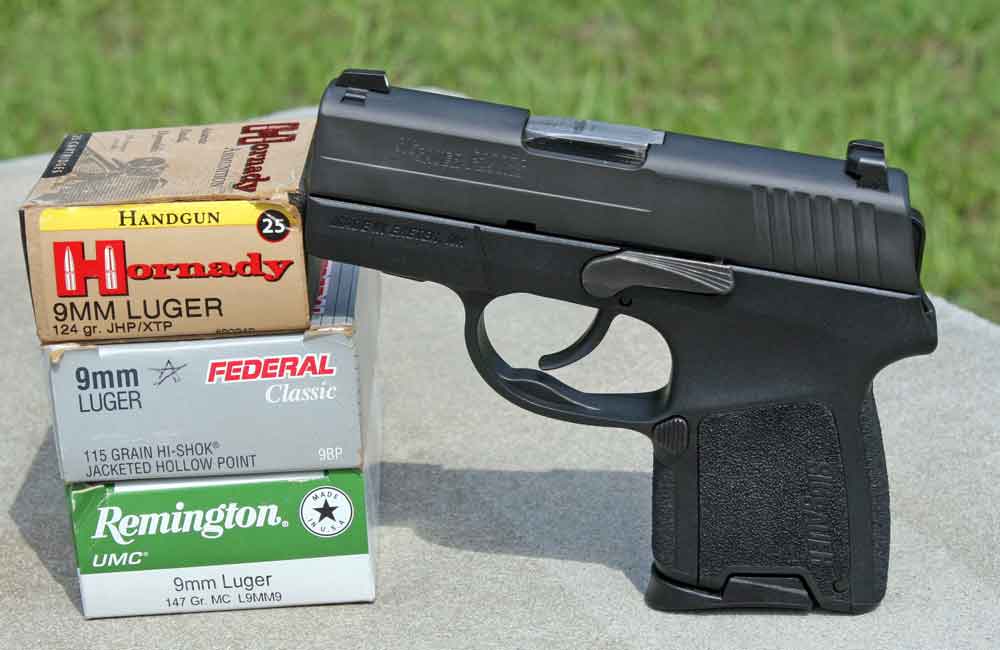 Some concerns showed up in its first year in the field. There were reports of occasional misfires. Because a lot of buyers were fans of traditional double-action SIG Sauer pistols, they didn’t appreciate the fact that, like so many striker-fired autos, these new guns wouldn’t let you just pull the trigger again if you got a misfire, one SIG exec later informed me. The folks at SIG Sauer in Exeter, N.H., came up with a few other tweaks that could be wrought on the P290, too.

As a result, the redesigned P290RS was introduced right at a year after the original P290, at the 2012 SHOT Show. It’s not another option, it’s a total replacement of the older gun.

The trigger mechanism is the defining new feature — but not the only one — on the P290 RS. The suffix in its designation stands for Re-Strike. SIG Sauer’s product manager at the Exeter plant, Tim Butler, tells me that the change involved a redesign of trigger bar, sear, and hammer. The result is a long, conventional double-action-only trigger stroke. The trigger goes much farther back before sear release than on the first iteration, but has proportionally less backlash.

The obvious advantage is that it gives an immediate second “shot” at a recalcitrant primer in the event of a misfire. Some don’t see this as a big deal, because they follow the doctrine that a bad round that’s failed them once doesn’t get a second chance, and their preferred response to a “click” instead of a “bang” is a fast “tap-rack-assess the situation in front of you.” 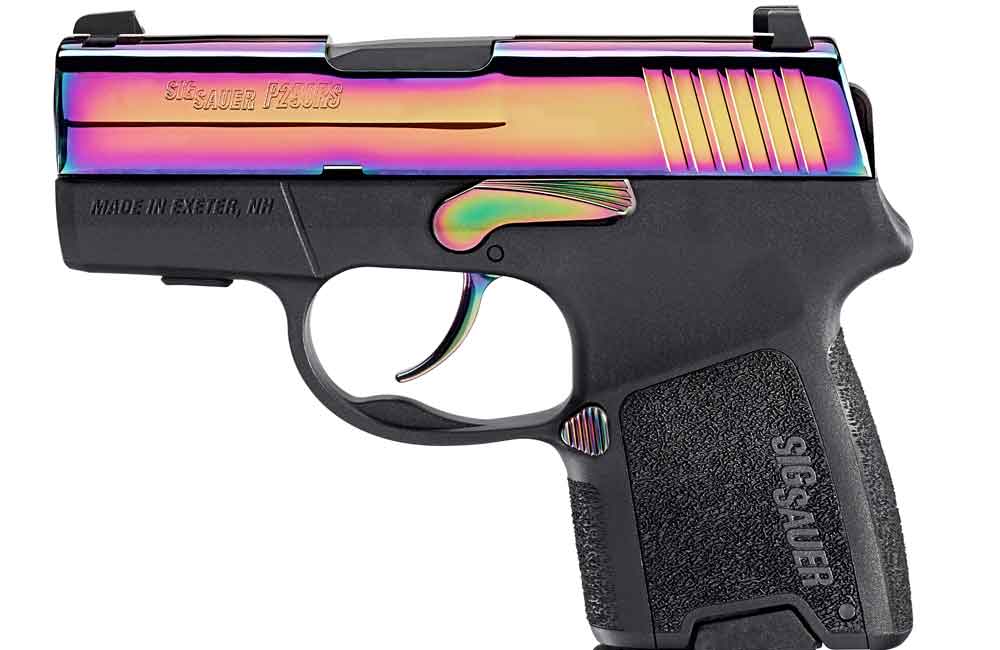 An absolutely undeniable advantage of the P290RS over its predecessor, however, is that it’s much more friendly for dry fire. Instead of having to interrupt your trigger pulling practice by breaking your hold and retracting the slide between dry “shots,” the P290RS owner can roll the trigger continuously.

There have been four other changes. Apparently some folks had hands beefy enough that the web of their palm could ride up and get pinched by the bottom of the external hammer during the slide cycle. (That never happened to this writer with the P290, but this writer doesn’t have the world’s biggest hands, either.) In any case, a subtle, rounded beavertail has been added at the rear of the grip tang. For smaller-handed shooters, it won’t hurt anything; for those with meatier paws, it could be a deal-sealer for this little 9mm.

The lower rear edge on the slide-lock lever of the earlier P290 had a rather sharp corner, and I can see where that would have been a problem for those who shoot with straight thumbs. That corner has been very nicely rounded. Good for you, SIG! There’s another manufacturer of powerful subcompact pistols which has long ignored a similar well-founded criticism.

On the first variation, the magazine release button stood up “loud and proud.” The good news was, when you were doing a speed reload, that big button was easy to hit. The bad news was, when you weren’t trying to dump the mag, it was still easy to hit. There were reports of some buyers carrying it inside their waistband, along with a personal “spare tire,” whose excess flesh accidentally popped the magazines. For the P290RS, the mag release button was trimmed down some in hopes of curing that problem. Finally, for some users, the super-small profile that was the P290’s raison d’etre proved to be too small. Those consumers felt they couldn’t get enough hand on the gun when shooting. A lengthened lip on the P290RS magazine created enough additional frontal length for both middle finger and ring finger to gain a secure purchase. (For those who want minimum butt size in every dimension, the P290RS comes with a flush-bottom floorplate that can be installed on the new magazine which, like the old, holds six rounds. Older mags will work in the new version of the P290, and vice versa.)

Moreover, the P290RS comes with an additional eight-round magazine featuring a grip extension. The thing was a test of strength insofar as getting the eighth round in, but it worked fine, and didn’t bind upon insertion, even with the slide closed.

The slide stop on the first P290 had a sharp edge at the lower rear. It is rounded on the P290RS.

P290s in their first generation had a trigger pull somewhere between 9 pounds and off-the-chart, the latter referring to the fact that the most popular pull gauge hits its limit at about 12 pounds. The test P290RS when tested on a Lyman digital trigger pull gauge from Brownells averaged 9.23 pounds of pull weight, when leaving the slide forward throughout and just pulling the gauge on the trigger. However, when cocking the slide to duplicate live fire cycling between each test trigger pull, the average weight went up to 9.60 pounds of average pull.

Strangely enough, over the years it has become common to test short-barrel handguns at short ranges — 5, 7, 10, or 15 yards — instead of at the 25-yard line, which is where fighting handgun accuracy has been judged ever since this old man came on the scene. Not yet having “gotten the memo” that people with short-barrel hand guns will be “given a handicap” in a gunfight across a parking lot, this writer continues to test short barrel and longer-barrel defensive handguns alike at the traditional distance of 25 yards. Working hand-held off a Matrix rest on a concrete bench at a measured 75 feet, I tried out the P290RS with the three most popular bullet weights in 9mm Luger/9mm Parabellum/9×19. (You know the cartridge has been around for a while when there are at least three different designations for the same darn thing.) I used my standard protocol: measuring each five-shot group center to center between the farthest hits, and then taking a second measurement of the best three hits. A test done for American Handgunner a decade ago, with me and Charles Petty, confirmed that the “best three” measurement under these circumstances would come remarkably close to what the same gun and cartridge would do from a properly adjusted Ransom machine rest. It’s a useful tool, because most folks don’t have access to a machine rest, but most of them can test their hardware from a solid bench rest, to compare their results with what the gun writer might be getting.

147-grain subsonic 9mm rounds became trendy in the late 1980s. Winchester developed the concept with their original OSM (Olin Super Match), created at the behest of Special Forces personnel who wanted super-accurate 9mm rounds that could center an enemy sentry’s head from a suppressed MP5 submachine gun. The exemplar of the concept for this test was the inexpensive Remington-UMC 147-grain full metal jacket round, which this writer has seen win many a pistol match. From the SIG Sauer P290RS, it put five shots into 4.25 inches from 25 yards. It must be noted that four of those five shots were in 2.45 inches, and the significant “best three” shots created a tight group of 1.10 inches. (Measurements were to the nearest 0.05 inch.)

For most of the epoch of the 9mm Luger cartridge, the 124-grain bullet was the heaviest load available. For this test, our 124-grain exemplar was the Hornady XTP load, using a deep-penetrating jacketed hollow point projectile. The five shots went into 4.35 inches, and the best three of those formed a 2.80-inch group. When this writer was a young puppy cop, if you wanted a hollow point 9mm round, it was going to weigh 115 grains. Our test load in that bullet weight was the Federal Classic, coded by its manufacturer as “9BP,” which over the decades proved itself to be one of the most accurate loads ever produced in its caliber. It re-proved that in this test, with a five-shot group measuring 4.05 inches. Four of those shots were a mere two and a quarter inches apart, and the “best three hits” measurement was “the best of the test,” 65/100ths of one inch center to center. That is simply amazing performance from a short barrel pocket pistol with a heavy trigger pull at, remember, 25 yards, not 25 feet.

For a very long time now, “conventional gun wisdom” has held that a 4-inch group at 25 yards was “acceptable combat accuracy” from a full-size 9mm service pistol. The P290RS, an itty bitty pocket pistol, came achingly close to that: 4.15 inches with 147 grain, 4.35 inches with 124 grain, and 4.05 inches with 115 grain averages under four and a quarter inches. By that standard, we have in the SIG P290RS a pocket-size 9mm that needs to make no apologies at all in terms of accuracy. This was, after all, a small, light gun with a long trigger pull much heavier than the gun’s own weight. I have no doubt that its intrinsic accuracy is much greater than what I was able to wring out of it in five-shot groups.

Shooting and carrying the P290RS

I wore the little SIG 9mm for a while on my non-dominant-side hip as a backup, in the useful new Remora holster. Comfort was exquisite: no sharp edges anywhere.

Because of the long trigger pull and concomitantly long trigger return, I wasn’t able to get the speed in rapid fire that I’d expect from some other fire control mechanisms. Recoil had a bit of a snap for 9mm Parabellum, but nothing I could call uncomfortable. The shape of the P290RS causes it to point low for me, but that’s subjective: dry handling in the gun shop will quickly show whether it’ll be a problem for you, before you put your money on the counter. This little pistol passed through a lot of hands among my test group. Only one shooter had a problem: A man with very long fingers found his middle finger (and particularly his thumb, in the thumb-down grasp he prefers) rode the magazine release and three times caused the mag to drop when he didn’t want it to. The long, heavy trigger pull didn’t make a lot of friends, but the little SIG’s comfortable size and rounded edges were both unanimously appreciated. Several also liked the fact that by putting their thumb on its flat hammer, they could holster the P290RS without fear of an unintended discharge if a drawstring from a warm-up jacket or something like that got fouled in the trigger area.

Throughout the whole test, there were only two malfunctions. One was a 12 o’clock misfeed with a 147-grain load, quickly rectified with a tug on the slide. The other was a misfire (on a Federal round, of all things, famous for sensitive primers). As per the “RS” design, I just pulled the trigger again, and the shot went downrange. Both malfs occurred early in the first 50 shots during “break-in.” There were no further mechanical malfunctions.

All in all, despite a manufacturer’s suggested retail price of $758, this handy little 20.5-ounce seven-shooter is a definite contender in the currently hot niche of subcompact 9mm carry pistols.

SIG Fan? Then you have to take a look at: The Gun Digest Book of SIG-Sauer By Massad Ayoob 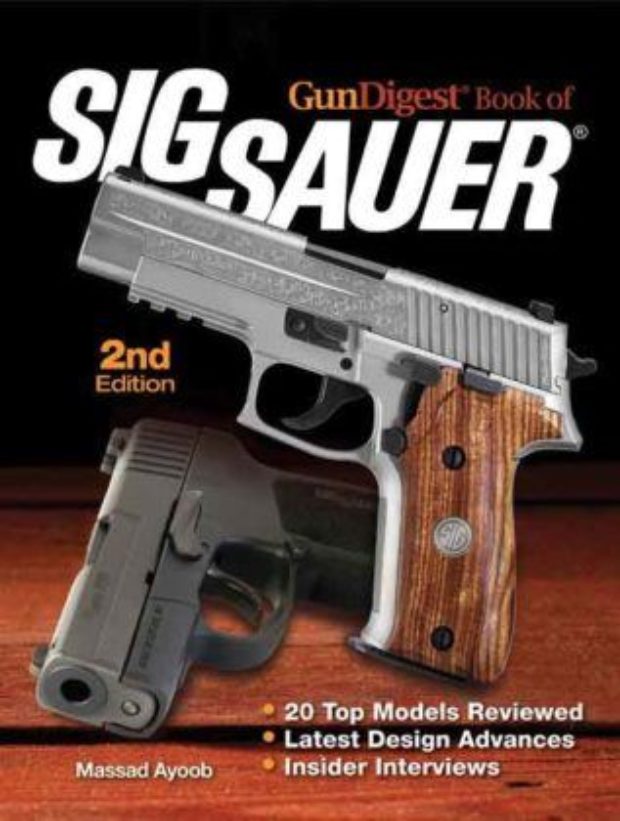