I don’t like the N-word, or the phrase “the N-word” (see Louis CK), but I’m also not going to be like Piers Morgan and play the game of “They Can Say It, So Why Can’t We?” Personally, I never use the word except when I’m performing with Bring the Yellow Tape, my NWA cover band. And even then, I do the “air quotes” thing every single time.

Seriously, though, I do my best to scorn and revile people for the content of their character, not the color of their skin. To me, you’re an individual, not a series of checkboxes. You are more than your identity. I dislike you for who you are inside.

Of course, exploiting this reticence to offend, this fear of being labeled a bigot, is a great way to get out of trouble. For example, did you see the viral video of the woman in a Delaware restaurant screaming her head off about a disabled vet’s PTSD service dog? Here it is:

Judging by her man’s reaction, this isn’t the first time she’s done something like this: 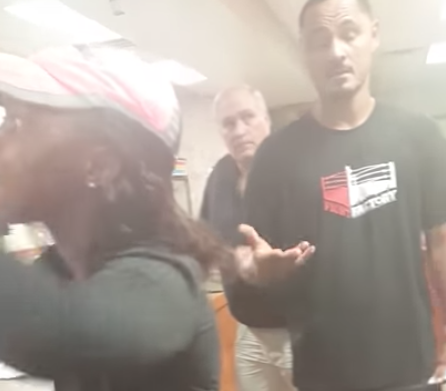 Poor guy. And if that vet didn’t have PTSD before, he sure does now.

Now she’s explaining why she was so honked off. Or making excuses for it, anyway. TMZ:

The woman who was recorded going OFF on restaurant diners about a veteran’s service dog being allowed inside says the clip of her profanity-laced tirade doesn’t tell the full story.

Ciara Miller tells TMZ … before the camera started rolling, a woman at Kathy’s Crab House in Delaware called her the n-word and other customers hurled racial slurs at her for leaving because she didn’t like the dog being near her while she ate.

That’s weird, because nobody in the video said anything about her race. And she didn’t say anything about it either. If somebody really said that to her before what we see in that video, wouldn’t she have screamed about it at some point in that furious tirade? I feel like she would’ve at least mentioned it. I find it unlikely that she was too angry to remember being called a [racial epithet I’m not supposed to say, even when I’m quoting somebody who’s accusing people of saying it to her].

But hey, I’m white, so questioning this woman’s word makes me a racist. And they wonder how we got Trump…

That’s a beautiful pupper, by the way. I’m sure he was as baffled about that mess as everybody else, but he kept his cool. Good dog.