There are two SEC teams in the top 10 of the latest college football AP poll.

Alabama had been the lone SEC team in the top 10 throughout the season so far, but they’re now joined by Georgia. The Bulldogs whipped up on Mississippi State this weekend.

Nothing overly surprising in the latest poll. We all knew the top five wasn’t going to change because none of them lost this weekend. However, PSU and Oklahoma both survived major scares. 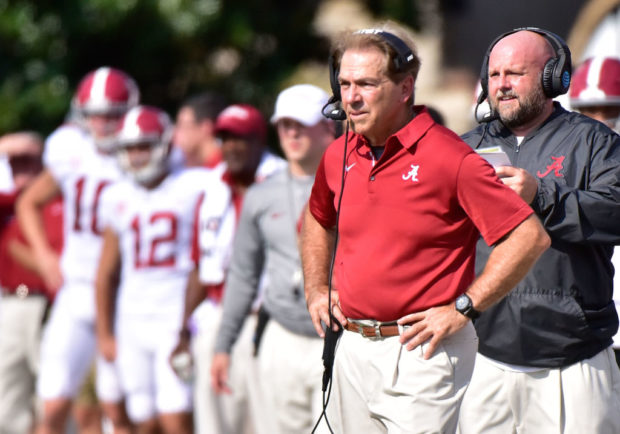 NASHVILLE, TN – SEPTEMBER 23: Head coach Nick Saban of the Alabama Crimson Tide watches from the sideline during the first half of a game against the Vanderbilt Commodores at Vanderbilt Stadium on September 23, 2017 in Nashville, Tennessee. (Photo by Frederick Breedon/Getty Images)

We probably won’t see a ton of shakeups until teams get into the meat of their conference schedules. It’ll probably be much of the same for at least the next week or two.