This collector’s item celebrates the 75th anniversary of the Buck 119 special. It includes not only the knife (obviously) but also a custom medallion in the handle and commemorative logo in the sheath. The collectors tin is available for a limited time – for the discounted price of just $70, that limited time is just one day. 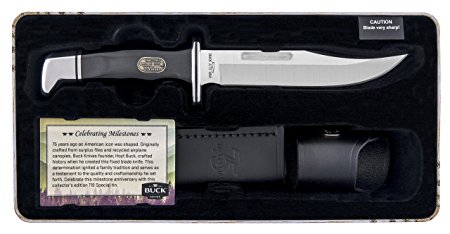 Normally $100, this fixed blade knife is 30 percent off today (Photo via Amazon)

Hoy Buck’s first fixed blade knife was made from a file way back in 1902. That design later became the iconic 119 special. After the attack on Pearl Harbor 40 years later, the U.S. government asked for knife donations for the military. It was then that Hoyt Buck began making knives by hand, using surplus files and airplane canopies. These became the the Buck 119. Now in 2017, this knife celebrates the man’s passion and devotion to his craft, as well as his support for our nation’s military.

Unfortunately, this collector’s item only has one review – for just 1 out of 5 stars. The customer’s complaint? That he is a lefty… Of course, that is not the knife’s fault in the slightest. The legacy of Hoyt Buck and helping America’s heroes deserves better.