There are a lot of reasons for the SEC’s fall from grace, but none might be bigger than the arrival of Alabama football coach Nick Saban.

The SEC was the crown jewel of college football for nearly a decade, but has really struggled to maintain any serious footing as a national power in the past few years. I’m a big believer the main reason the SEC is down is because Nick Saban has been so successful at Alabama that he has driven away coaches from the conference. 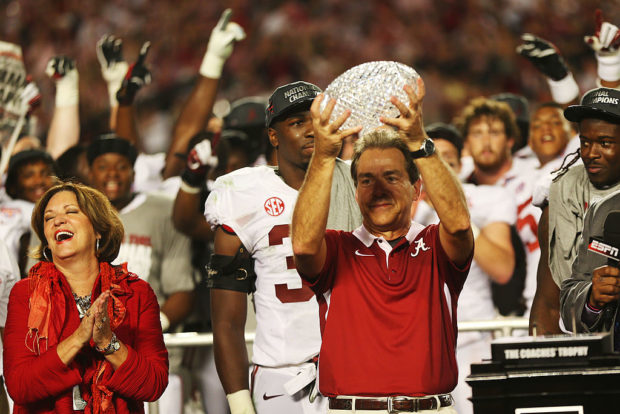 MIAMI GARDENS, FL – JANUARY 07: Head coach Nick Saban of the Alabama Crimson Tide celebrates with the BCS Coaches’ Trophy as his wife Terry looks on after defeating the Notre Dame Fighting Irish in the 2013 Discover BCS National Championship game at Sun Life Stadium on January 7, 2013 in Miami Gardens, Florida. Alabama won the game by a score of 42-14. (Photo by Mike Ehrmann/Getty Images)

Playing Alabama is nearly a guaranteed loss for SEC opponents. Teams can’t compete, coaches are fleeing the conference, schools are putting unrealistic expectations on programs to compete on the same level of the Tide, and nearly all of this is a reaction to Alabama’s four national championships since 2009.

At the same time, the Big Ten is flourishing right now, the ACC is strong and the Big 12 has three national championship contenders. Great coaches are headed to greener pastures because they don’t want to deal with coaching against Saban and the insane expectations that come with it.

There are some circumstances Saban has no control over. The Big Ten has way more money, which has led to better coaching contracts and recruiting resources. That’s a very influential deal, but I don’t think it’s close to the damage Saban’s success has caused the conference.

Life is great if you’re an Alabama fan right now. It’s awful if you’re anybody else in the SEC.