Just look at this mess:

so, i guess canada has permanently banned me ? @CitImmCanada denied entry b/c of convictions similar to “treason” offense pic.twitter.com/xp0JOEEOGd

imagine a world without presidents #WeGotThis

this is what a police state looks like police/military/intel act with total impunity #WeGotThis https://t.co/HnTYcWmvfN

Every tweet of his is like that. I find it irritating, and I want to respond in kind, but there’s no emoji for “traitor.” So I’ve come up with a brief sequence of emojis to express what I think about Bradley Manning:

Here’s a screenshot, in case Twitter forces me to delete that: 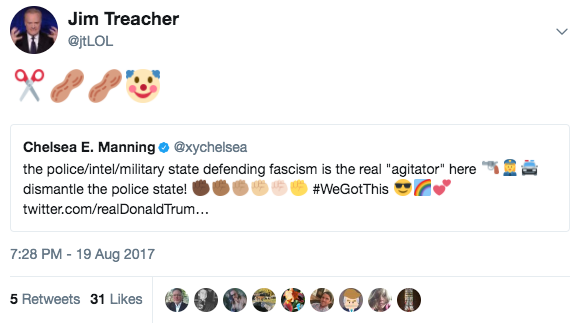 If you can’t make that out, it’s a pair of scissors, a pair of nuts, and a clown. In my opinion, that describes Bradley Manning to a T.

I’ve been using that series of emojis for the past month or so, and Twitter just locked my account (@jtLOL) for 12 hours because of it. I’m not banned, and my account is still there, but I can’t tweet anything or reply to anybody. They made me delete a couple of tweets with that series of emojis before even granting me the suspension. If I hadn’t deleted them, I’d be locked out for good. (Apparently, whoever complained to Twitter didn’t see the above tweet from August 19. Yet!)

Twitter has right to do that. It’s a private platform and can enforce its own rules, even if it seems arbitrary to the rest of us. I’m just amused that the SJWs are now punishing people for using the wrong emojis. I hurt a traitor’s feelings with a few emojis.

Bradley Manning is a designated victim. He’s protected. Watch what you say to him. Including the word “him.”

Well, at least I got a blog post out of it.

I’ve got a sabbatical from the Internet planned soon, and stuff like this is going to make it a lot easier. Social media has driven everyone insane. You can all be hysterical idiots without me. I’m gonna party like it’s 1994.