An NFL owner reached out to The Daily Caller Monday night to express his extreme displeasure with players protesting the national anthem.

“I am f*****g livid right now. I see this s**t and I lose my mind. It needs to end immediately,” the owner stated during the brief phone conversation on background Monday.

“I’ll give up football completely and find something else to do with my time if this continues,” he added. “This horse s**t must end. These players are so out of touch. They disrespect our flag and then wonder why Trump won. It’s a no-brainer. This is so disrespectful.”

“People will run to college football over the NFL in droves if these protests continue,” the owner concluded at the end of the conversation.

Protests swept across the league Sunday, and hundreds of players refused to get up and stand for the anthem. 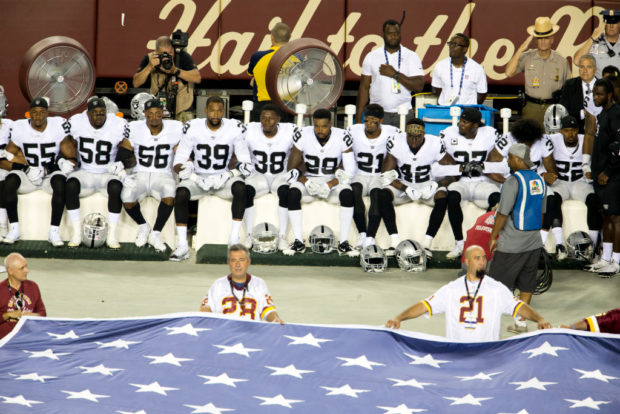 LANDOVER, MD – SEPTEMBER 24: Oakland Raiders players sit during the national anthem before they take on the Washington Redskins at FedExField on September 24, 2017 in Landover, Maryland. (Photo by Tasos Katopodis/Getty Images)

To be clear, the owner we spoke with is a shareholder of the Green Bay Packers. We feel this makes him uniquely qualified to put his finger on the pulse of everyday Americans, as opposed to possibly out of touch billionaires that own other NFL franchises.