She made the comments as President Donald Trump deployed the USNS Comfort to Puerto Rico after the U.S. territory was devastated by Hurricane Maria.

“Remember our Puerto Rican brothers and sisters are American citizens,” said Velazquez, flanked by members of the Congressional Black Caucus and the Congressional Hispanic Caucus. “They have fought in every conflict. They have shed blood they die for our freedoms. It is morally incumbent upon us to help them and by us I do not mean Democrats. I do not mean Republicans I mean all of us.”

Illinois Democratic Rep. Luis Gutierrez agreed, and attacked the U.S. Navy for using the island of Vieques for decades as a training ground to drop munitions.

“Go and deliver the necessary things that the people of Puerto Rico need today. That’s first and you know for decades you surround yourself with generals. Ask the generals, Mr. President. For decades they bombed the island of Vieques, for decades. … You know where it’s at,” Gutierrez said.

In 2003, Velazquez and Gutierrez were part of protest efforts to remove the Navy base from Vieques. The Daily Caller asked Velazquez how they can claim to be treating Puerto Ricans as American citizens when in 2003 they seemed to treat the base as the occupation of a foreign force.

“Let me tell you this. Puerto Rico and Vieques is a very small, very tiny, very small island with 10,000 people population. The military and the Navy bombed the hell out of them. Today, the cancer rate in the island of Vieques is very high,” she added. “It was pollution with uranium. So, yes, I went to Vieques. I got arrested, and President Bush left it.”

When asked what the unemployment rate was in Vieques since the Navy left, Velazquez replied, “I don’t care what it is. What I care is that we, the United States, is not going to bomb more than two-thirds of the island of Vieques.” 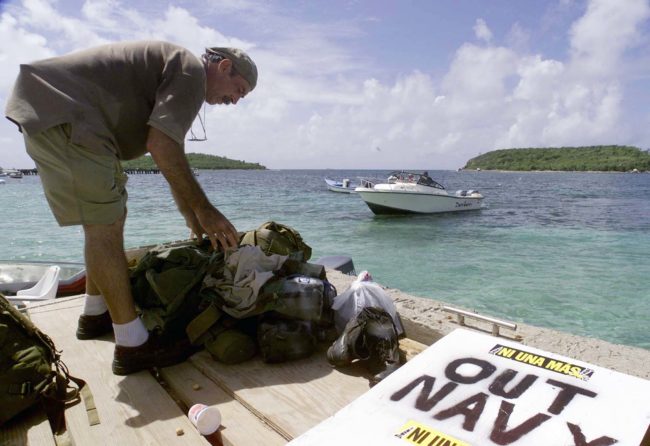 An anti navy man prepares to board a fishing boat in Esperanza bay in Vieques, Puerto Rico, August 4, 2001 in their attempt to halt the second day of the US Navy bombing training exercises. (Photo: REUTERS)

“A year after the Navy left Roosevelt Roads Naval Station, taking with it 6,000 jobs and an estimated $300 million annually, Ceiba is struggling as businesses close, unemployment rises and residents leave the town of 18,000,” the New York Times reported in 2005.

The Times noted, “Ceiba’s main business association says 15 of the town’s 250 businesses have shut their doors because of the base closing and 40 percent of those still open are in trouble. The unemployment rate in the town is 17 to 20 percent, nearly twice the average in Puerto Rico.”

The Navy used Roosevelt roads for around 60 years and attempted to sell its facilities between 2006 and 2010 but failed, The San Diego Union Tribune reported. By 2012, Puerto Rico bought part of the property. Nevertheless, unemployment in the area is around 12.2 percent as of last April, according to the Bureau of Labor Statistics.

Since it closed the base, the Navy has been ordered to clear out the unexploded munitions, so Vieques can become a safe haven for not only its residents but also tourists, Fox News reported in January. The Environmental Protection Agency points to contaminants from the ordnances as potentially problematic to humans and the environment.