The media mogul said in June that she “will never run for public office,” but she promoted an article Thursday saying she is the Democratic Party’s best hope for the 2020 election.

“Thanks for your VOTE of confidence!” Oprah tweeted at conservative writer John Podhoretz with a link to his New York Post article: “Democrats’ best hope for 2020: Oprah.”

The piece argued that Winfrey, 63, is effectively the perfect foil to President Donald Trump. 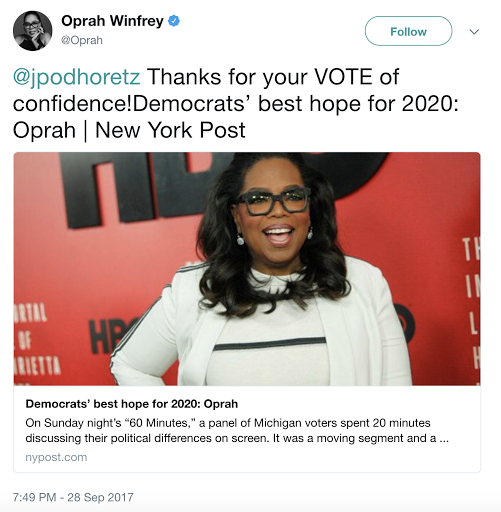 “She is the mirror image of Trump, but more so. Of course, she’s female and he’s male; she’s America’s generous aunt and he’s America’s crazy uncle. And yes, she’s black and he’s white, she’s liberal and he’s whatever he is,” Podhoretz wrote.

“It goes beyond that. He’s rich and she’s rich, but she made her $3 billion herself and with no controversy. She is, in herself, the embodiment of the American Dream. He got famous from TV, and so did she, but she became vastly more famous and vastly more successful at it.”

He went on to write: “As for politics, it’s worth remembering that Oprah played a not-insubstantial role in the 2008 election…A 2008 study at the University of Maryland suggested that Winfrey herself was responsible for more than 1 million votes cast for Obama in the Democratic contest — which suggests he might not have prevailed had she not campaigned on his behalf.”

Soon after Trump’s victory in November, Winfrey said she used to think she didn’t have the necessary experience to run, but “now I’m thinking, ‘Oh.'”

FOR MORE ON OPRAH’S PAST INVOLVEMENT IN PRESIDENTIAL POLITICS WATCH: