The ratings for “Monday Night Football” went down compared to last week, despite the fact that the game between the Kansas City Chiefs and Washington Redskins was an exciting one for football.

The ESPN broadcast last night came in 10 percent lower than the week prior for the game between the Dallas Cowboys win over the Arizona Cardinals 28-17, according to Deadline Tuesday.(RELATED: NFL Ratings Drop After Day Of Protest) 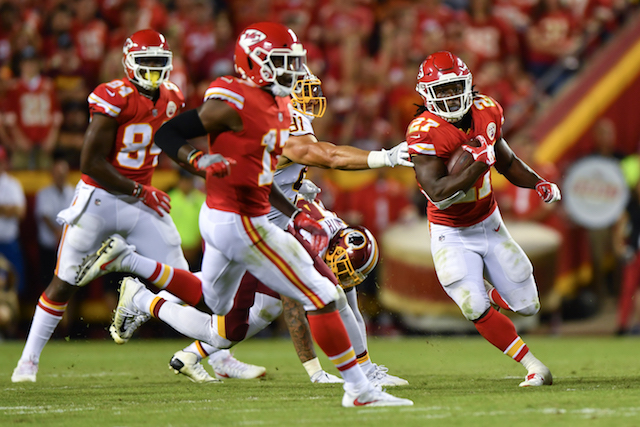 KANSAS CITY, MO – OCTOBER 2: Running back Kareem Hunt #27 of the Kansas City Chiefs rushes through a hole behind the block of Chris Conley at Arrowhead Stadium (Photo by Peter Aiken/Getty Images)

Compare those numbers to one year ago for the week 4 Monday night game between the Minnesota Vikings and the New York Giants, which were significantly lower than previous years.

ESPN had previously said they would not air the national anthem only to reverse course Monday after the deadly massacre Sunday night in Las Vegas that left more than 50 people killed and hundreds of others injured. Before the game started, a moment of silence was held for the victims and then the national anthem played.

Monday night’s game was not a blowout by any stretch and fans had to stay tuned in after the Redskins climbed to an early lead and lead 10-7 at halftime against the undefeated Chiefs in Arrowhead Stadium. The two battled all the way to the end with the Chiefs coming back in the second half to beat the Washington team 29-20.