Well, I’ve got good news. This 5-in-1 tactical pocket knife is on sale for under $40. It features a “drop-point blade with serrated saw, bright LED flashlight, magnesium alloy fire starter, blade lock, window breaker, seatbelt cutter and pocket clip.” Over 1,000 customers have reviewed it, and 78 percent of those have given it a perfect 5 out of 5 stars reserved for exceptional products. 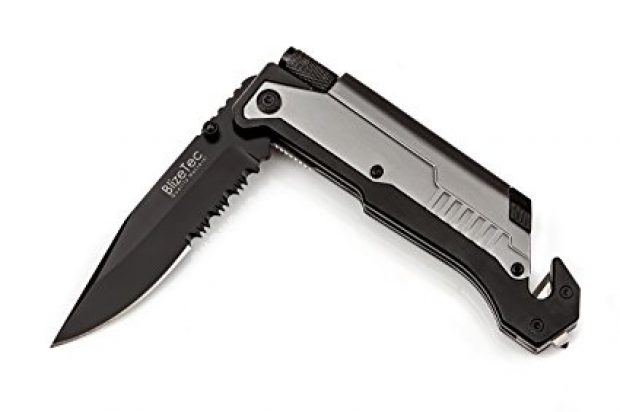 This knife normally costs $90, so you would be saving over $50 (Photo via Amazon)

This knife will help you survive. Don’t believe me? Take it from Chris Crews, who “Survived a month in the Himalayan mountains of Nepal like a dream”:

Just wanted to say that this is an amazing knife, and really lives up to its name as a survival knife. Just got back from a month in the Himalayan mountains of Nepal, and the performance of this knife was stellar in almost every way. It is sturdy but not too heavy. It has a solid feel in your hand, and stays clipped in place even with repeated daily use. The blade is very sharp, and has kept a good edge after a very demanding month of back country use (see pics).

A few of the tasks this handled beautifully included:

I also like that the belt clip can be removed with the three small screws, since after a month of constant use I needed to crimp the clip tighter to the body again, which was a lot easier when it was removed. The body has held up nicely, with minimal wear given the hard use, and the blade still has a decent edge (see pic) after a lot of rough use. I really only have two criticisms/suggestions of this, neither of which would prevent me from buying it again. If BlizeTec revamps this blade, these would be the design changes I would suggest. Otherwise this is a solid knife.

1) The mini light and the fire starter should be reversed on the top housing. Several times while using the knife for extended periods on a difficulty task (like carving up a roasted goat head) the light would pull out and fall into the dirt. Almost lost it once because of this. The textured head of the light tends to add friction right at the spot where your thumb wants to rest, making it easy to accidentally pull the light out while gripping the knife while in use. While the magnetized back helps, it is not enough. So I would switch this and the fire starter around, since it has a tighter profile against the housing and nothing to catch on your thumb.

2) The striker often did not strike very well since it’s so small, and the serrated teeth are closely spaced, leaving very little space between the black head and the striker shaft for the teeth to catch, especially when using the serrated edge of the knife closer to the hinge. Maybe if you have tiny hands this is easier, but I have fairly large man hands, and always felt a little cramped when using it. It may not be practical to make the striker any longer, but maybe making a slightly larger final serrated gap where the straight edge starts would give a little better bit on the striker and a little more spacing for larger hands.

So besides these two suggestions, this is a brilliant knife, and is definitely going into my bug out bag for future continued use! Thanks BlizeTec for a great all around knife combo. 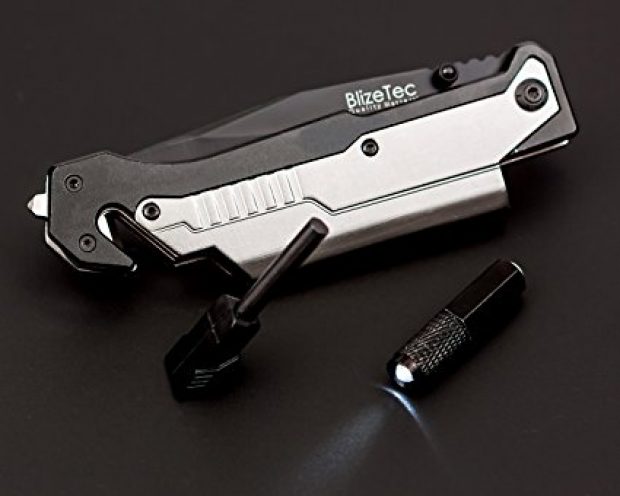 Weighing less than 6 oz, this knife is perfect for carrying around (Photo via Amazon)