Cam Newton issued an apology via Twitter Thursday night in response to a comment he made to a female reporter during a press conference earlier this week when asked about football routes.

“After careful thought I understand that my word choice was extremely degrading and disrespectful to women, ” the Carolina Panthers quarterback explained in the video. (RELATED: Cam Newton Just Lost A Sponsor Over His ‘Sexist’ Remarks) 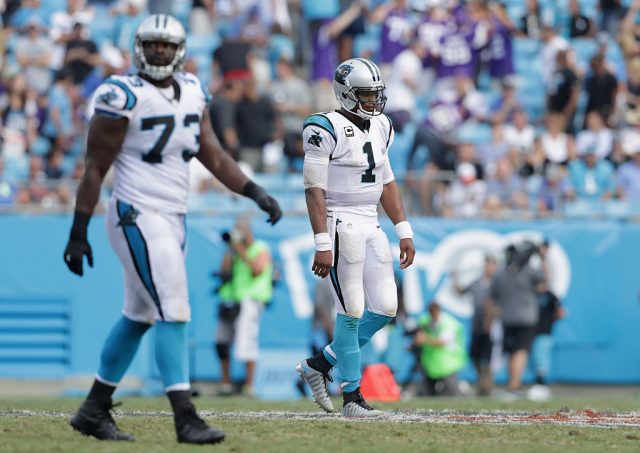 Teammates Michael Oher #73 and Cam Newton #1 of the Carolina Panthers walk off the field against the Minnesota Vikings during their game at Bank of America Stadium on September 25, 2016 in Charlotte, North Carolina. (Photo by Streeter Lecka/Getty Images)

“And to be honest that was not my intentions,” he added. “And if you are a person who took offense to what I said I sincerely apologize to you. I’m a man who tries to be a positive role model in my community and tries to use my platform to inspire others. ”

“And I take ownership to everything that comes with that,” he continued. “And what I did was extremely unacceptable. I’m a father to two beautiful daughters and at their age I try to instill in them that they can do and be anything that they want to be.”

“The fact that during this whole process I’ve already lost sponsors and countless fans, I realize that the joke is on me,” Newton shared. “And I’ve learned a valuable lesson from this. And to the young people who see this, I hope you’ve learned something from this as well. Don’t be like me, be better than me.”

He then said to the journalists, moms, sisters, daughters and the women around the world, he “sincerely” apologized and asked for forgiveness.