A Democratic state representative who has organized anti-police protests in St. Louis rapped about shooting “snitches” and dragging their dead bodies behind cars in a series of rap videos.

State Rep. Bruce Franks Jr., a freshman lawmaker elected in November 2016, used the rap name Ooops as part of a rap group called St. Louis Cypher. In a series of videos, some as recent as 2015, Franks rapped about shooting and stabbing people to death and hiding the evidence.

“I off them if they snitch, I put a shotty to their body, send them straight to the reverend! I put them in a body cast, put them in a body bag, tie them to the bag of the Chrysler then it’s body drag!” Franks can be heard shouting in a freestyle rap video. “A nigga speak my name, he will get slain!”

“These niggas better stop playin, I get to AK-in,” Franks raps, referencing an AK-47.

“Don’t get added to my hit list, try to spit with a slit throat get left neckless,” Franks rips in another video. Another lyric: “They won’t recognize you until they find you and count your parts.”

Franks’ raps also include non-violent lyrics like: “With the women I’m phenomenal, running like Obama do, P90X until she feeling it in the abdominal.”

In one 2015 video, Franks rapped about carrying out revenge stabbings.

“I have been shot, stabbed, robbed, but don’t worry about me. I returned those favors. Came back three weeks later just to return the razor,” he rapped.

“It’s prom night, I’m drunk, I didn’t come to play with this bitch,” he rapped in another video.

Franks defeated Democratic incumbent State Rep. Penny Hubbard in the party primary in September 2016 and went on to win the general election in the very Democratic district.

Franks has been a leader in ongoing anti-police protests in St. Louis following the September 15 acquittal of police officer Jason Stockley in the shooting of a black drug suspect, Anthony Lamar Smith. The protests have been ongoing for almost three straight weeks.

Franks was one of 143 protesters arrested on Tuesday night for blocking a major St. Louis highway.

“We getting locked up! Take one!” he wrote on Facebook shortly before getting arrested.

Franks has said that the purpose of the protests is to inflict damage upon the local economy.

“The objective of protests is to disrupt and to affect the economy,” he is quoted as saying in a meeting with activists on September 28.

Franks claimed the protests had already inflicted $11 million in economic damage, including a cancelled U2 concert. “That sounds effective to me,” he said.

Franks, who did not reply to TheDC’s interview request, stakes out a firm anti-police stance in other social media posts.

One Facebook posts include a picture depicting a protester and a police officer with the caption: “FUCK YOUR ORDERS.” 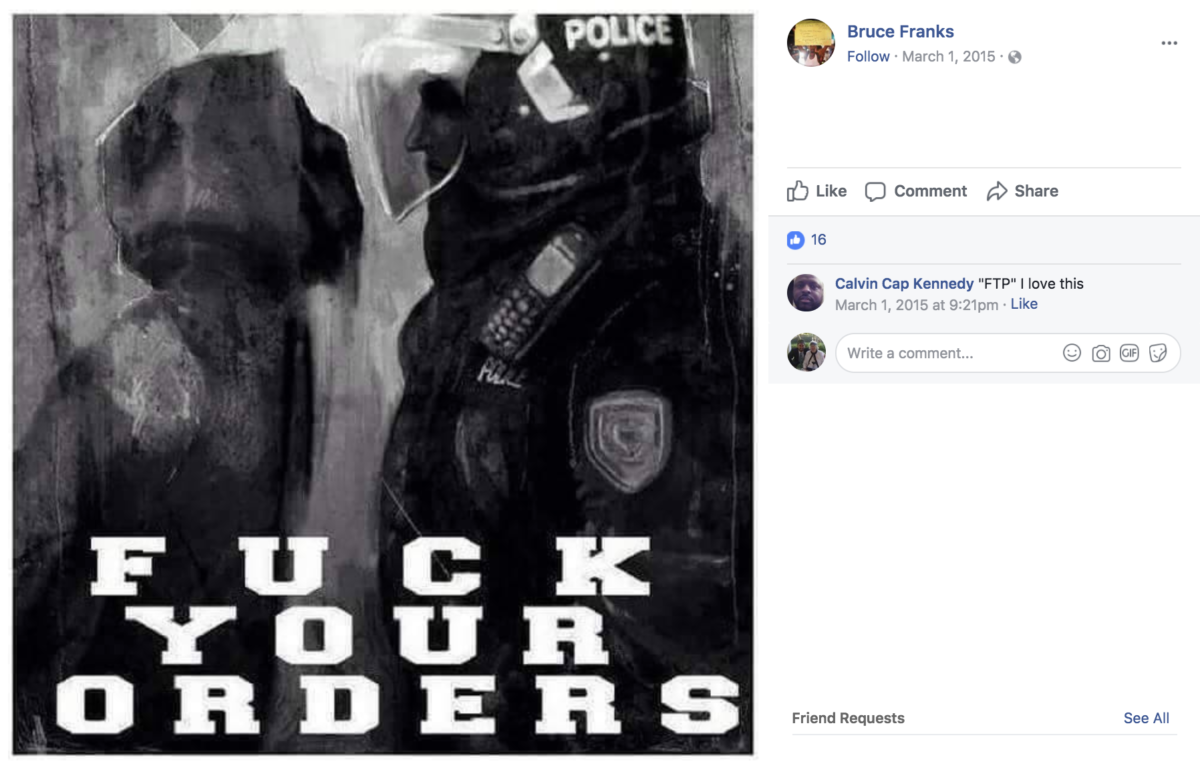 In one Twitter post, Franks refers to being “clean now” and adds: “fuck da po po,” referring to police officers.

In another tweet, Franks stated that he has “no respect” for any police officer in Ferguson, Missouri.

Franks is currently a ranking member on the state legislature’s Committee on Crime Prevention and Public Safety and chair of the Subcommittee on Police/Community Relations.