The president of the taxpayer-funded University of Michigan, Mark Schlissel, wrote in an email that he found it “ironic” when students who supported Donald Trump felt “marginalized and ostracized” on campus after the 2016 presidential election. A few months earlier, Schlissel wrote in another email that he “would feel awful if Trump won the election” and seemed to suggest that he wanted to use his taxpayer-funded job to defeat Trump.

Schlissel then refused to release the emails — and others — in which he disparaged Trump and Trump’s supporters.

On Wednesday, the Mackinac Center for Public Policy reached a settlement over the University of Michigan’s refusal to release the emails. The Michigan free-market group had sued the public school in March. In the settlement, the Michigan officials agreed to release Schlissel’s emails they had previously withheld in response to the Mackinac Center’s Freedom of Information Act (FOIA) request.

In a Nov. 11 email — three days after the election — Schlissel told the chancellor at the University of Michigan–Dearborn that there was “some complaint from our minority of Trump supporters who now feel marginalized and ostracized in our campus milieu and post election activity.”

Schlissel described the complaints about feeling marginalized as “ironic.” 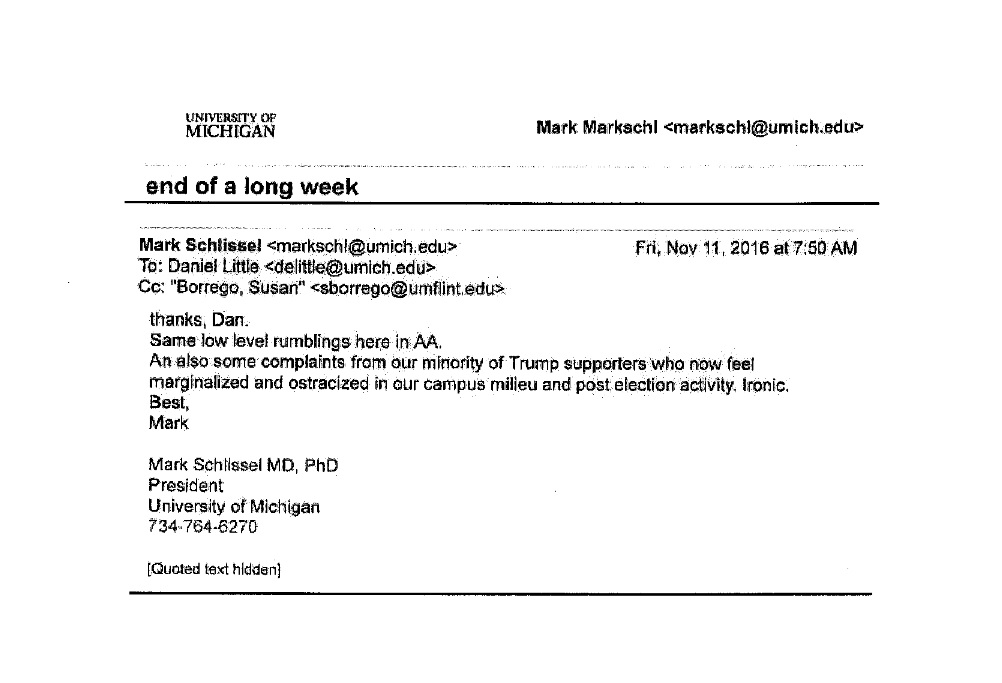 In a Nov. 10 email to Mary Sue Coleman, Schlissel predecessor as Michigan president, Schlissel said he was “overwhelmed with uncertainty” because Trump won the election.

The 59-year-old Schlissel, whose lifetime has included the Sept. 11 terror attacks and the fall of the Berlin Wall, described Trump’s narrow election victory as “unlike anything” he has “ever lived through.”

“Students rallied on the Diag yesterday night and the speakers all expressed fear about their place in American society and on campus. I was only able to reassure them about the latter,” Schlissel wrote.

In the immediate aftermath of Trump’s 2016 presidential election victory, the University of Michigan hosted several events for students who were upset that Trump had won the election.

There were also protests. Dozens of students gathered to chant “Pussy grabs back,” “Not my president” and much more. One or more Michigan students also spray-painted “Kill ‘Em All” and “Fuck America” onto a large public rock on campus. The paint showed a donkey and elephant, representing the Democratic and Republican parties. (RELATED: NO SAFE SPACE: The Daily Caller’s YUGE Roundup Of Campus Freakouts After Trump’s Victory)

Schissel also plainly and unmistakably implied that Trump and Trump supporters oppose science and believe only white people should attend the University of Michigan. 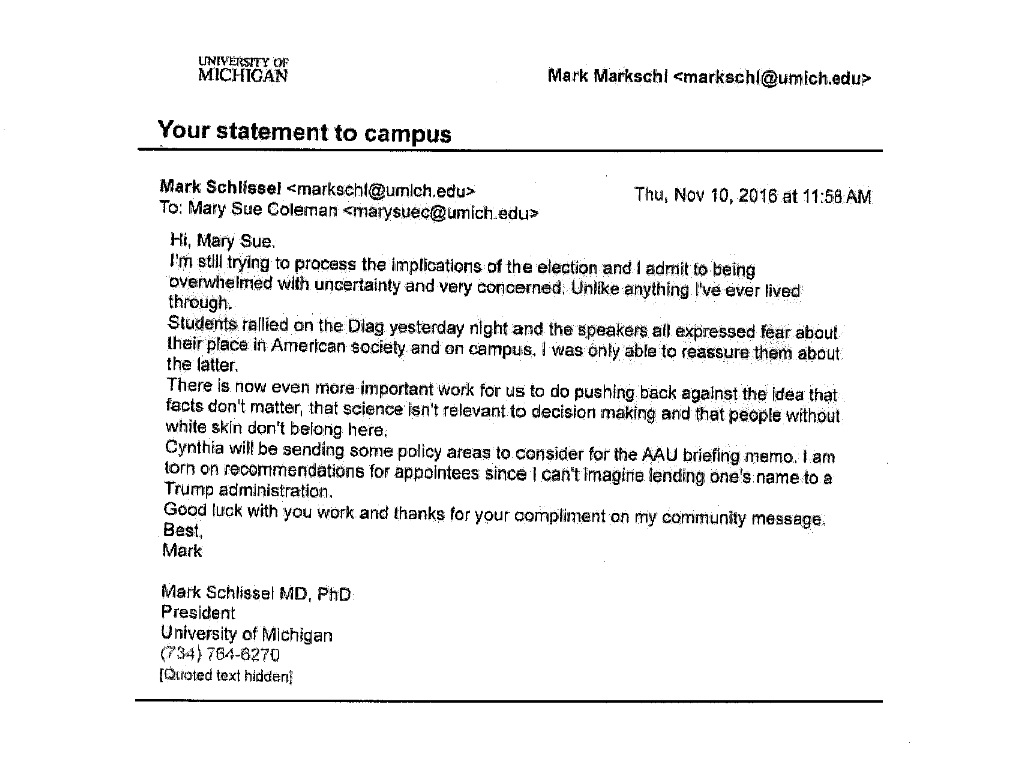 In an Aug. 24 email, prior to the election, Schlissel wrote that he “would feel awful if Trump won the election” and he seemed to suggest that wanted to do things from his taxpayer-funded position to affect the election.

“I would feel awful if Trump won the election and I was too afraid of appearing political to make any effort to encourage our students to thoughtfully participate,” Schlissel wrote. 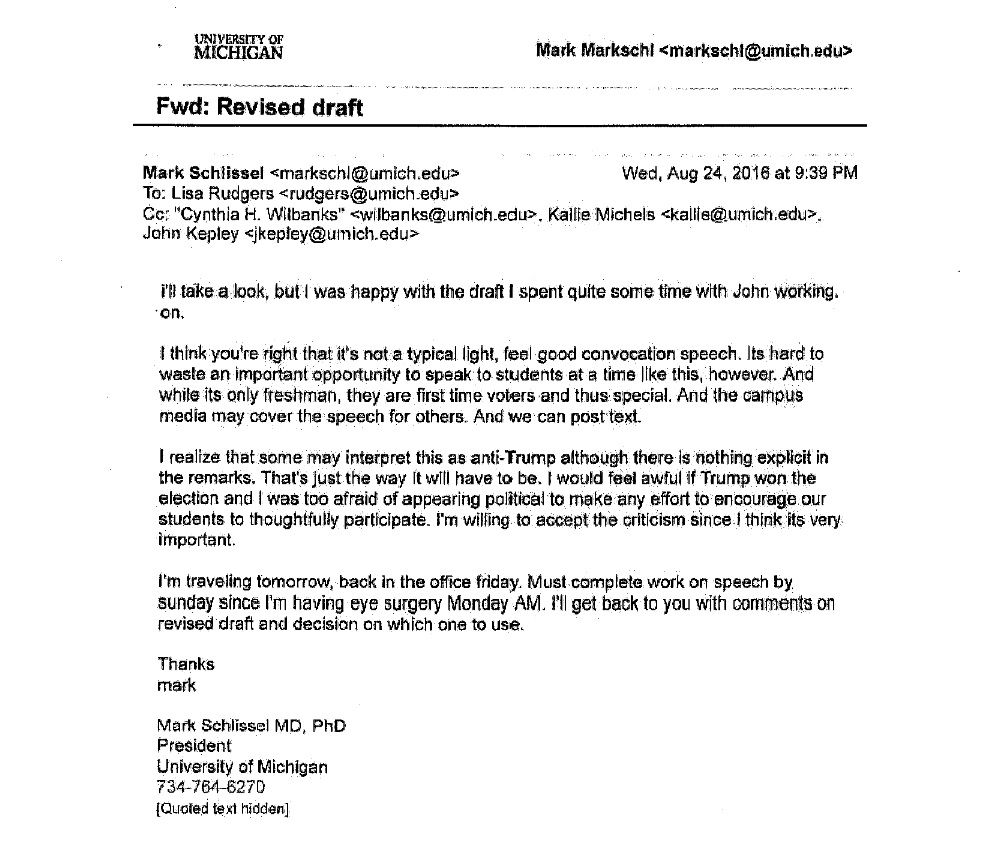 The Mackinac Center notes that Schlissel is a public employee and that the University of Michigan collects more than $1 billion each year in taxpayer funds from the federal government and the state of Michigan.

Schlissel is the fourth-highest paid employee on the University of Michigan’s campus in Ann Arbor. As of 2015, his salary was $772,000 per year, reports The Michigan Daily. 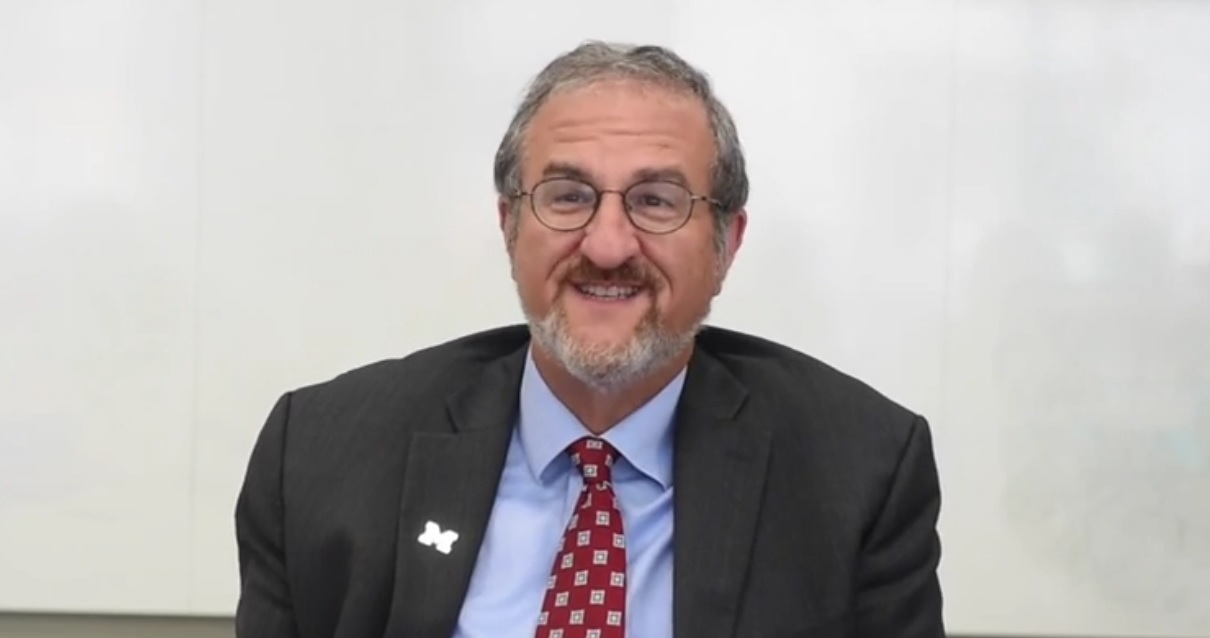 “The University of Michigan is a public entity which receives more than $300 million in state funds,” said Mackinac Center spokesman Patrick Wright.”

In addition to releasing the unreleased emails, the University of Michigan also agreed to change its policies concerning FOIA requests as part of the settlement. The new policies will make obtaining information easier for taxpayers and the press.

“People and the press have a right to this information, even if it’s embarrassing or inconvenient for the public officials involved,” Wright said.

The Mackinac Center noted that school officials said they needed less than three hours to gather the information they had been withholding.

An especially silly election-related event occurred at the ostensibly prestigious University of Michigan Law School. After Trump won, staffers scheduled — then hastily canceled – an event entitled “Post-election Self-care with Food and Play.” The University of Michigan Law School’s embedded psychologist, Reena Sheth, was going to host of the event.

“Join us for delicious and comforting food with opportunity to experience some stress-busting, self-care activities such as coloring sheets, play dough [sic], positive card-making, Legos, and bubbles with your fellow law students,” the description of the event announced — before school officials rescinded it in response to intense national mockery. (RELATED: University Of Michigan Law School Tries, Fails To Scrub Trump Trauma Play-Doh Event From Website)

In August, officials at the University of Michigan were looking to hire a new employee to oversee the taxpayer-funded school’s “Bias Response Team” and “enact cultural appropriation prevention initiatives.” The full-time position — with the title of “bias incident prevention and response coordinator” — offered a starting salary between $46,000 and $57,000. (RELATED: Public University Famous For Trump Trauma Play-Doh Now Seeks ‘Cultural Appropriation’ Cop)

Trump eked out a victory in the state of Michigan in 2016. He won the state’s 16 electoral votes by receiving just 10,704 more votes than Hillary Clinton received.

The University also famously tried to let everyone choose their own pronouns last academic year. The effort was largely a failure. (RELATED: Conservative Student Is Now ‘HIS MAJESTY’ After University Of Michigan Lets Everyone Make Up Their Own Pronouns)

Employees at the University of Michigan have attempted to marginalize Republicans before: