Hollywood and the left attacked Vice President Mike Pence after he left the San Francisco 49ers and Indianapolis Colts game Sunday when a handful of players took a knee during the national anthem.

Actress Patricia Arquette attacked Pence for “disrespecting women,” after he tweeted that he and President Donald Trump “will not dignify any event that disrespects our soldiers.”

“I left today’s Colts game because @POTUS and I will not dignify any event that disrespects our soldiers, our Flag, or our National Anthem,” Pence tweeted.  (RELATED: Pence Leaves Colts Game In Disgust After 49ers Kneel During National Anthem) 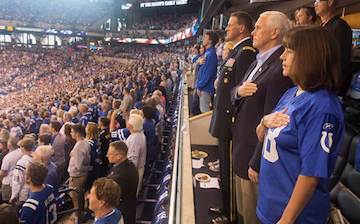 “But distrespecting women is a wheels up all clear,” Arquette tweeted in response to the vice president’s explanation for why left the game.

But distrespecting women is a wheels up all clear!

Television producer Elan Gale said the vice president and Trump demanding people not protest was the “least American thing I’ve seen in my life,” before he called him a good “vice dictator”

“This whole thing where Pence and Trump are demanding that Americans not protest is probably the least American thing I’ve seen in my life,” Gale tweeted.

It’s a good stand to take. You should never allow citizens to peacefully protest. You’re a good vice dictator.

YOU are a hypocrite and an idiot! WE will not dignify anything you have to say about any of this! #regimeofassholes #corruptidiocracy

If you can’t bare the sight of people exercising their rights to free expression, quit pretending you’re brave enough to lead them. https://t.co/uvkn0d5geu

You wouldn’t know dignity if it came and shat in your mouth.

We are being murdered in the streets. Flint and Puerto Rico have no drinking water. But protest is undignified? Fuck you, Mike Pence!

If your standards are so high, Mike, why do you dignify and stand by a sexist, egotistical, lying, hypocritical bigot?

“1. This is fake outrage.
2. This is pre-planned outrage,” Freeman tweeted.

An ugly, despicable PR stunt by the Vice President of the United States.

1
'This Is A Sham': Tucker Blasts Health Care Professionals Who Signed Letter Exempting George Floyd Protests From Coronavirus Restrictions
Media
2
Police Respond To Call About A Shooting, Arrive To Find 7 People Dead Inside Burning House
US
3
Minneapolis's Democratic Mayor Shouted Down By Protesters For Not Wanting To Defund Police
Politics
4
15 People Died In The Protests And Riots Following George Floyd's Death. Here's Who They Are
US
5
'How Am I Gonna Tell My Kids?': Detroit Father Of 5 'Devastated' After Riots Destroy His Property
Politics