“I like cops, firemen, veterans, vodka and whiskey, so it seemed smart to turn my lifestyle into a brand.”

Alex Plitsas is talking about his most recent adventure: spirits.

Born in 1985, he’s had a few. As a volunteer New York firefighter for the Village of Mamaroneck, he joined his colleagues in days of search and rescue as the dust from the towers hung in the air and the pictures of the missing covered the windows.

Three years later, he enlisted with the U.S. Army Reserve, heading to Baghdad for the 2007 surge. In the Battle for Sadr City, he served with the 312 Psychological Operations Company. You can catch a taste of those days in the third battle scene of “American Sniper.” He came home with the Bronze Star for meritorious achievement during combat.

Leaving a sergeant, he returned one more time as a contractor, and then to Afghanistan as a civilian intelligence officer on a detail from the Under Secretary of Defense for intelligence. Today, he lives with Lisa and their twin daughters in Connecticut, and in 2015, he and Alex Mackiewicz joined forces to begin Valor Spirits. It’s been a long trip.

“Two years ago, I  was running operations for an aerospace and defense company,” Plitsas told me. “I was meeting with the CEO and she asked for entrepreneurial ideas. I said, ‘Whiskey.’ She thought I was joking.”

It turns out his CEO sat on the board of UltraPure one of the largest suppliers of bulk organic and non-GMO alcohol. It turns out, UltraPure was just opening a small spirits division to help launch new brands. And Plitsas was talking to the right woman in the right room.

Together with her brother, hospitality veteran Mackiewicz, the two set to it, investing a good deal of their savings into building a couple of spirits they’d like to drink. They got in touch with a master distiller on the West Coast with Sovereign Flavors, working to develop the recipe. “I described what I was looking for,” Plitsas recounted over the phone last week. “The best whiskey you can get your hands on.”

He’d told me a number of times, but the hour, the company and the spirits had always ensured the details were vague. 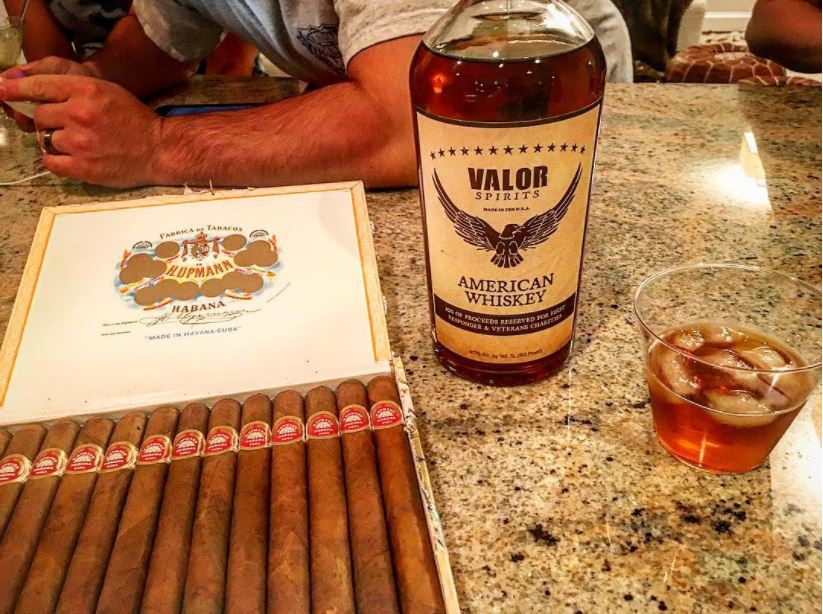 Valor settles down for a good smoke. Photo: courtesy of Valor Spirits.

“I love baby bourbons,” he says, “so we went with over 50 percent corn. I wanted a new American oak, so we aged for six months in Indiana.”

The recipe they ended up taking to Crown Valley Distillery in St. Genevieve, Missouri was 71 percent corn, 20 percent rye, and 9 percent malted barley. American, all of it.

“It was all a royal pain in the ass,” Plitsas laughs. “The government can’t get out of its way to help small business be successful.”

But they were determined. They bought an old fire truck, branded it, got some tee-shirts and a carved, wooden sign, and set to it. 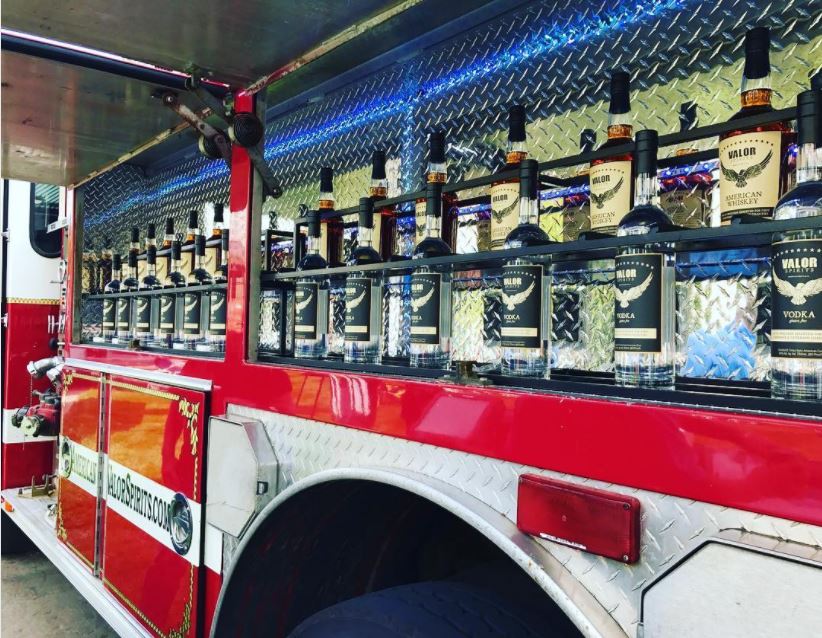 Valor is not an ideal fire suppressant. Photo: courtesy of Valor Spirits.

In late June, Plitsas and Lisa rolled up at his parents house on the Chesapeake Bay with the kids, a case of vodka, and a case of whiskey. We stood by, glasses ready, and the Scotts-Irish in my blood kept my brain skeptical as the Greek-Italian from New York hand poured his new whiskey. But I’m writing this article today, four months after I first said I would, because my skepticism was dashed to pieces. 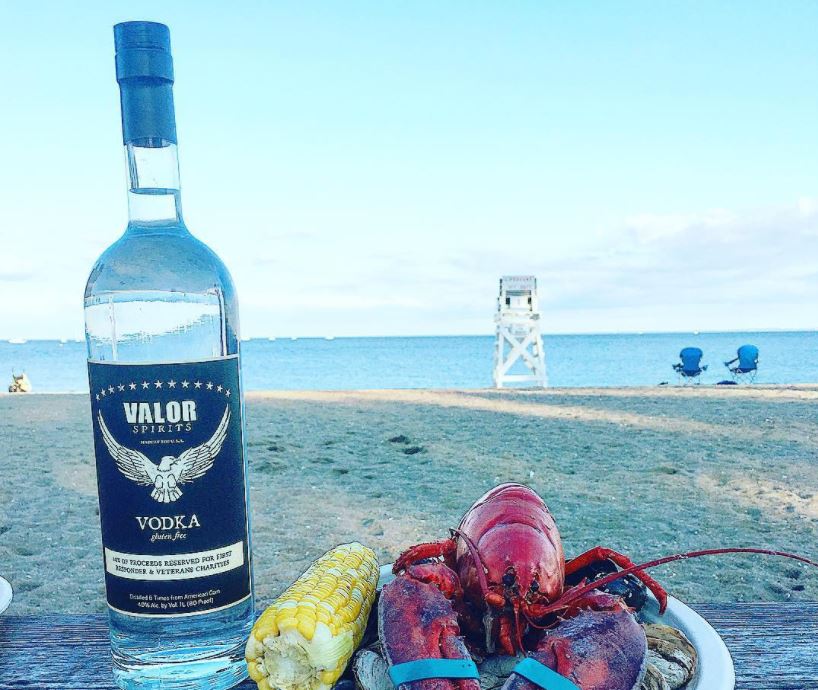 Valor and a lobster hanging out together at the beach. Photo: courtesy of Valor Spirits.

Light brown to the eye, it’s not a dark whiskey on account of its young age (18 months shy of the two-year mandate that would make it bourbon). At first on the nose, it’s all corn all the time, without a harshness. After it sits a while, though, a little alcohol comes through but also some maple.

Neat, it’s damn easy drinking, with a touch of alcohol spice. Adding two cubes sweetens it up a bit, quickly covering the alcohol spice, and rendering it dangerously drinkable. Add a little Gosling’s Ginger Beer (“a Valor & Ginger, if you please”), and you’ve got the phenomenal cocktail that defined our Saturday by the pool. Well, that and Valor Vodka tonics. 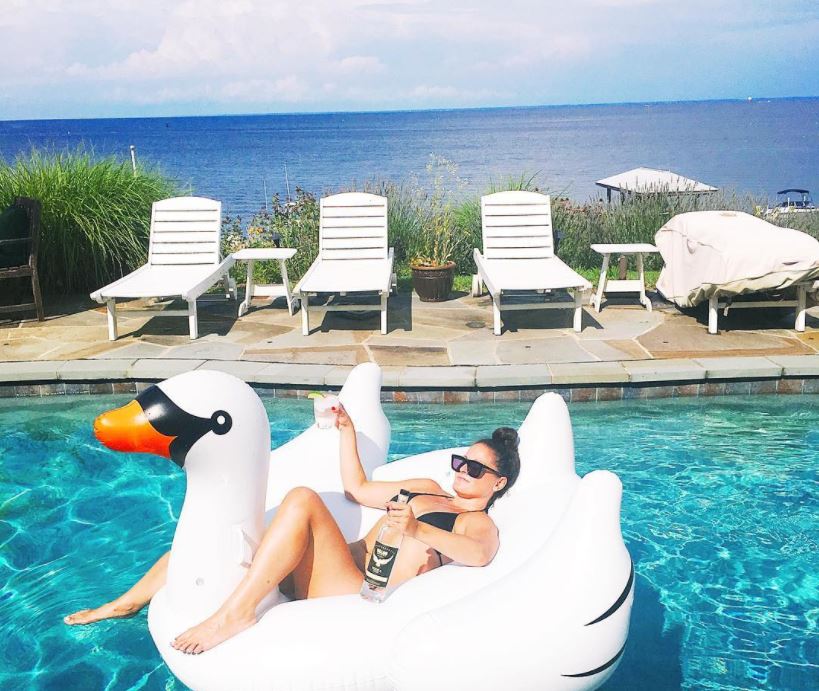 Valor is not a lifeguard substitute. Photo: courtesy of Valor Spirits.

Available online in 43 states at AmericanValorSpirits.com, Plitsas and Mackiewicz are working to appeal “to your red-blooded, American, Jack and Titos drinker,” and the market is ripe. Their whiskey and vodka is already available at 150 bars, restaurants, stores and casinos in Connecticut, New York and New Jersey, with plans underway to expand into the D.C. metro area next. Their bottles sell at $19.99 for the vodka and $24.99 for the whiskey in 750 ml bottles, and are a little more expensive when ordered online.

The plan is to make some money. “We’re sticking with two products until we do,” Plitsas told me when I asked what’s next. But expansion isn’t all they’ll do with that incoming profit: 10 percent of their proceeds will be given to first-responder and military charities.

“We salute the servicemen and women whose sacrifice is the definition of Valor in this country,” the handsome bottle reads.

It’s a delicious salute, and a great product from a good couple of guys. Cheers to that. 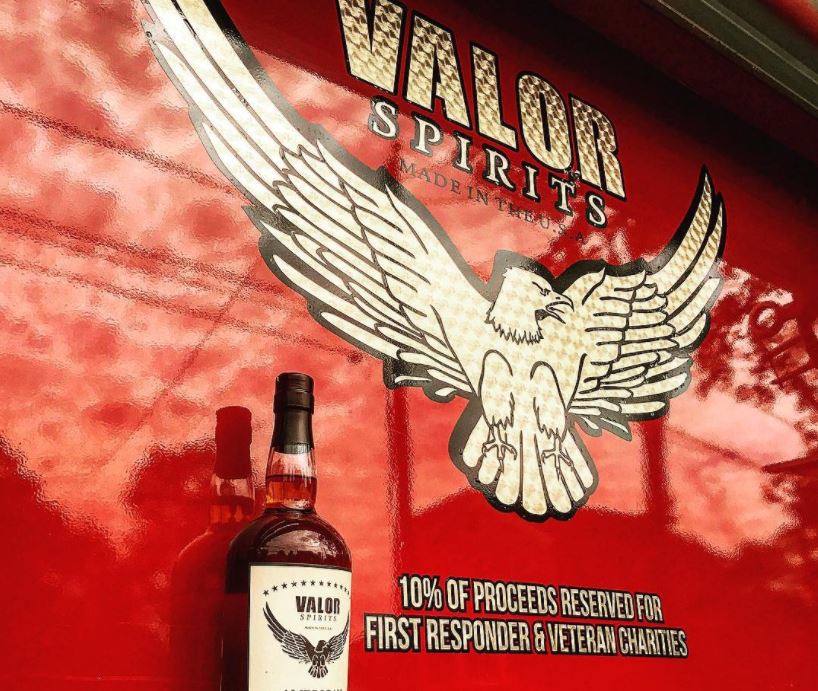