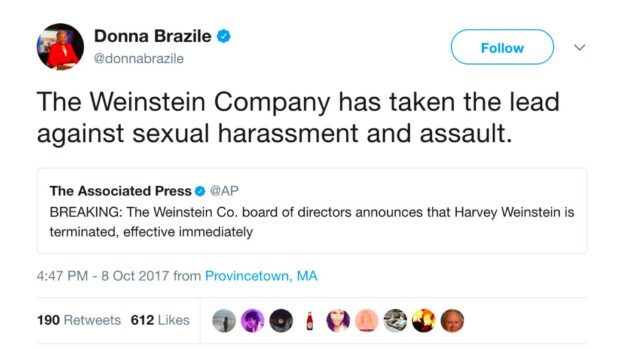 The tweet was baffling to many as Weinstein was only terminated after The New York Times published a report revealing that there were decades of previously undisclosed sexual abuse allegations against Weinstein. Weinstein also reportedly reached settlements with many of his accusers, exchanging large sums of money for non-disclosure agreements.

Twitter mocked Brazile for her tweet, arguing that it’s unlikely the Weinstein Company was oblivious about the many accusations before the NYT report. She finally deleted her tweet on Monday morning after being relentlessly ridiculed.

This is Hillary Clinton’s personal aide, who not only cheated at debates and then lied about it, now is covering up for a sexual predator.

The company certainly knew of Harvey’s abuses for years and did nothing. Also, you cheated Sanders to help Clinton. Your words mean nothing.

If getting caught with ur pants down is “taking the lead against sexual harrassment,” ur on the wrong end of the donkey. @donnabrazile

The Weinstein Co. Has been in cover-up mode for YEARS. The only reason they fired him (which means nothing) is because he got caught.

“The Germans have taken the lead against Jew-hatred” – You, in 1945

Your attempt to spin this positive is laughable at best. You liberals have a catastrophic crisis on your hands. And we all know it. So stop.