You may want to thoroughly do your homework before you slam another network for what you claim is not covering the Harvey Weinstein sexual harassment story to the degree you think it should be covered.

Especially since your boss Jeff Zucker appears to be pretty damn friendly with the filthy, perverted Hollywood film mogul. How about a full disclosure on all of CNN’s stories on the scandal?

Speaking of media complicity ask yourself why NBC reporter @RonanFarrow wrote this for The New Yorker.

Thanks to freelance writer Yashar Eli for providing the photographic evidence. Tapper may want to ask himself why a CNN President parties with a sexual harasser like Weinstein. 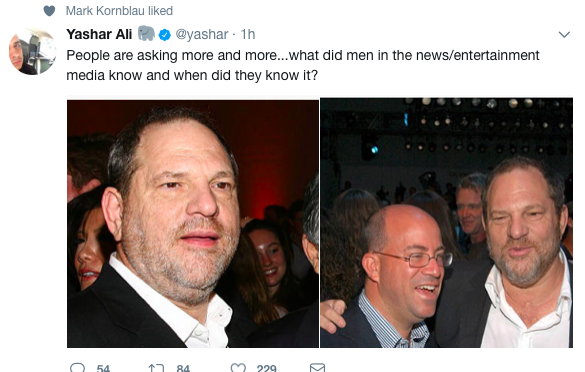 The Mirror sought comment from Tapper to ask him what he thinks about his boss hanging out with Weinstein and if he wants to walk back his insinuation about NBC’s Weinstein scandal coverage.

Tapper has not yet replied to my request.