Ratings for “Monday Night Football” plummeted to a season low in Week 5, despite the well promoted release of “Star Wars: The Last Jedi” trailer during the game.

According to Deadline, ESPN walked away with ratings that were 17 percent lower than the “MNF” game just the week before. (RELATED: ‘Monday Night Football’ Ratings Down) 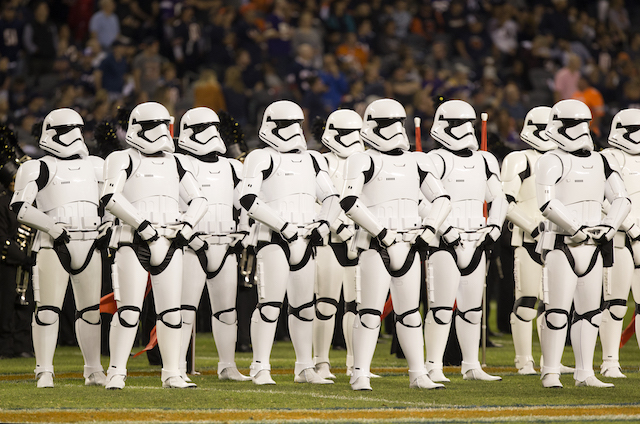 CHICAGO, IL – OCTOBER 09: Storm troopers take the field during a special halftime showing of the new Star Wars movie Star Wars: The Last Jedi at Soldier Field during the game between the Chicago Bears and the Minnesota Vikings on October 9, 2017 in Chicago, Illinois. (Photo by Kena Krutsinger/Getty Images)

The Monday night game, between the Bears and Vikings, pulled in 11.9 million viewers, with a 4.3 rating in the key demographic of ages 18-49. The 2017-2018 season has seen ratings fall significantly as a result of national anthem protests by players.

However, it’s not all bad news for the National Football League and ESPN. Last night’s game was actually 8 percent higher than the week 5 Monday night game a year ago between the Tampa Bay Buccaneers and the Carolina Panthers.