WASHINGTON — Before the presser began, there were murmurings of a potentially juicy question about President Trump in comparison to fallen perve-ball Hollywood mogul Harvey Weinstein, who is reportedly off doing yoga and contemplating his demise at an Arizona rehab facility.

Sadly, that would not come to pass.

White House press secretary Sarah Huckabee Sanders took a back seat on Thursday, giving breathing room to the real star of the day’s White House briefing: President Trump‘s confident, debonair chief of staff John Kelly. After briefly appearing at the podium to take a few bone-dry digs at the press, saying how much fun it is to take reporters’ questions every day, she introduced the man of the hour. 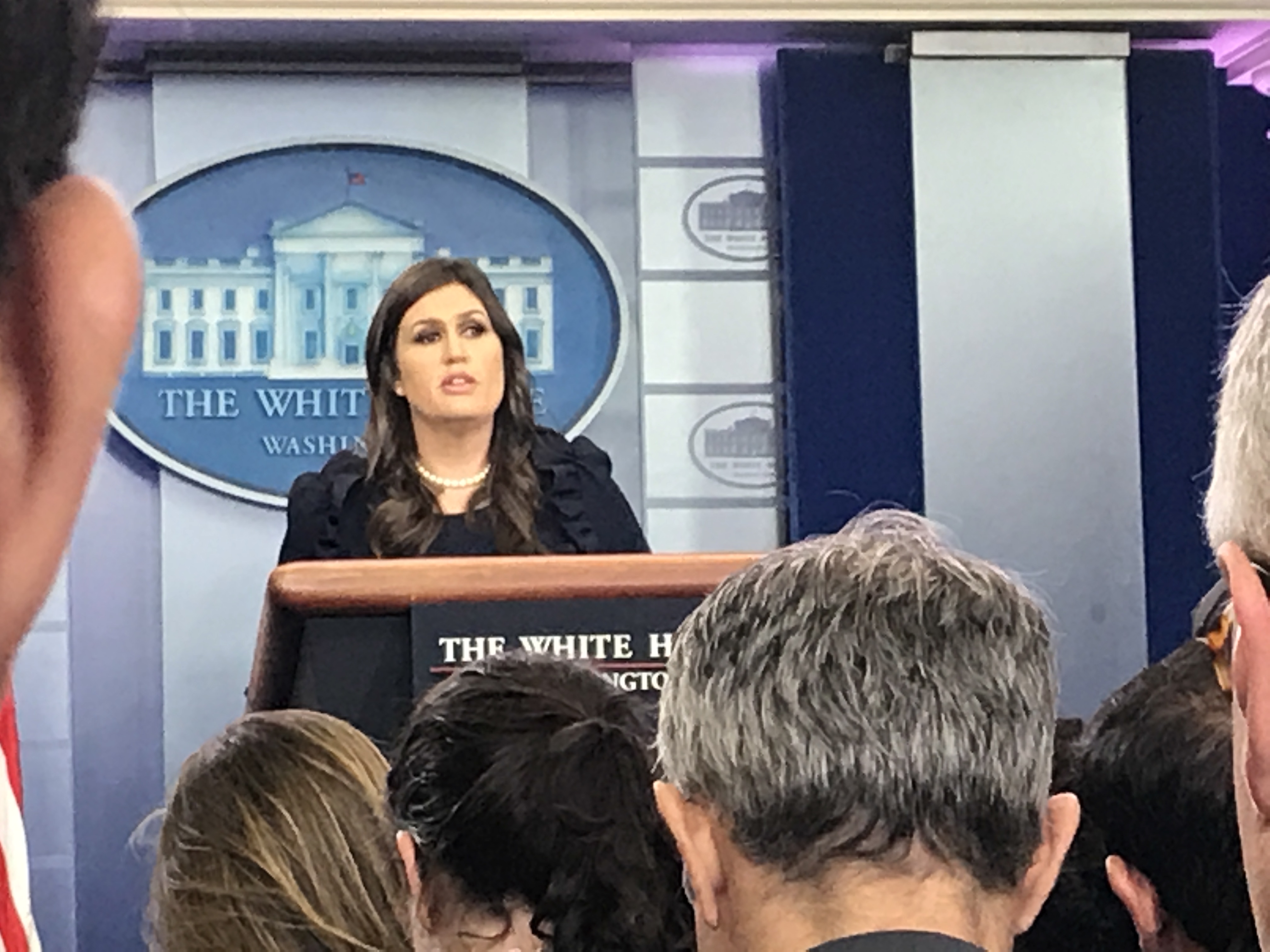 Call it a charm offensive. Kelly pleasantly engaged the media in amusing repartee while dressing down reporters as not as well-sourced as they think they are.

“I have done three off-the-records, one of which was violated,” Kelly calmly told the Washington press corps.

Despite the mounting rumors, he explained he isn’t leaving the White House.

“I don’t think I’m being fired today,” Kelly said. “Unless things change, I’m not quitting, and I’m not getting fired.”

On Tuesday, POTUS complained about how the press was treating Kelly. “The Fake News is at it again, this time trying to hurt one of the finest people I know, General John Kelly, by saying he will soon be fired,” Trump wrote. “This story is totally made up by the dishonest media.The Chief is doing a FANTASTIC job for me and, more importantly, for the USA!”

When asked about the president’s frustrations, you could feel it coming.

“One of his frustrations is you,” he said pointedly. “All of you. Not all of you, but many of you. It is astounding to me how much is misreported. Just offering advice, maybe develop some better sources.”

When asked about his own frustrations, Kelly remarked, “My only frustration is when I come to work in the morning and read about things that I allegedly said.”

Since bashing the media is White House pastime, no one was too upset about it.

Nor did journos necessarily seem bowled over by Kelly’s presence.

It was Kelly’s virgin White House press briefing. He was a fish out of water on names and seat arrangement. But he didn’t seem fazed by his ignorance on protocol. It was all sort of charming. There was nothing, no one, no question Kelly couldn’t handle on the fly.

“Are the people in the front row the most important people?” a mildly amused Kelly asked, looking out at the sea of raised hands and shouting voices.

A low growl erupted from the back of the tiny, well-lit room. “Noooooooo,” they replied. 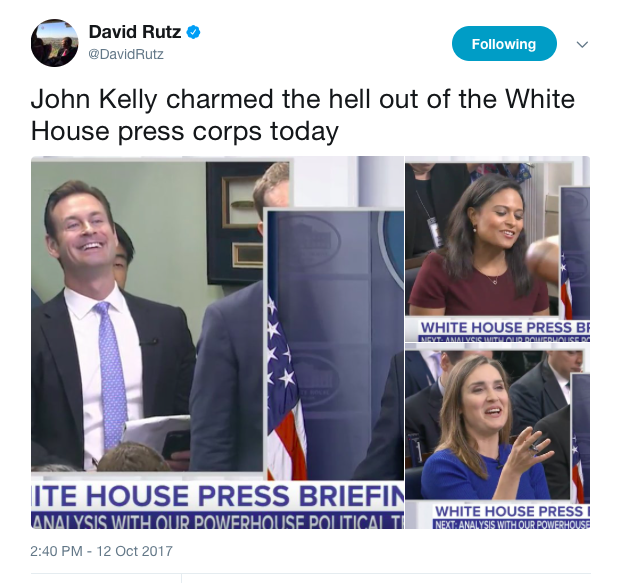 A reporter watched Sarah Sanders smirk as the India Globe‘s White House correspondent Raghubir Goyal got in a question no one else in the room really gave two shits about hearing.

A hot topic on the table Thursday was Trump’s tweets.

Kelly insists his job at the White House is not to control Trump or stop him from tweeting.

Trump Counselor Kellyanne Conway backed up Kelly from her perch in the Twittersphere. “In which General Kelly shuts down nonsense-fiction-conjecture about the work & relationships in WH & shows what an excellent leader he is,” she wrote artistically at 2:12 p.m.

A female Brazilian TV reporter from Global News was intent on inquiring about those tweets.

“General! General! One more question in the back!” the frantic high-pitched foreign voice yelled out, dipping into a crescendo of disappointment when he didn’t initially call on her. 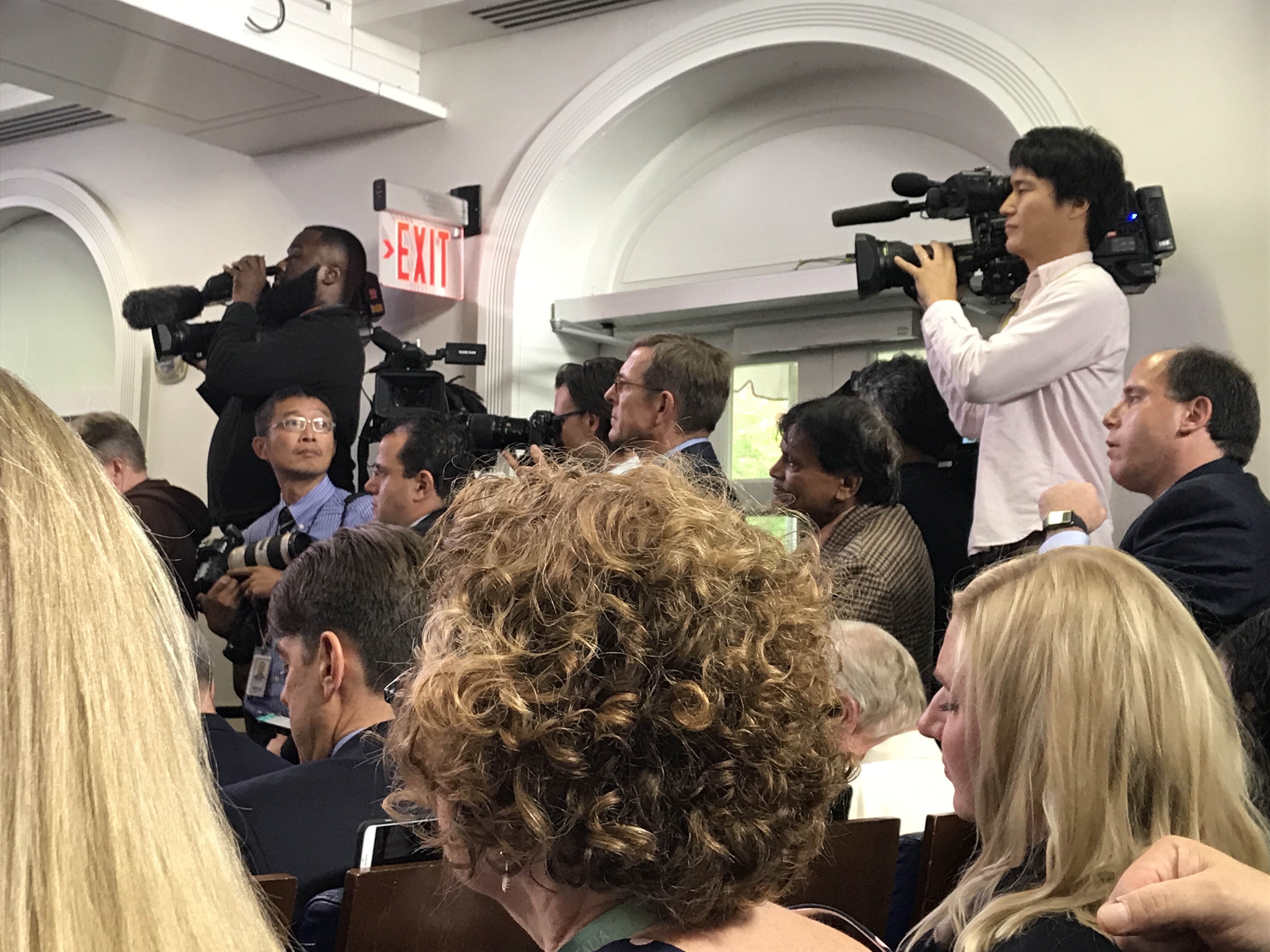 The reporter was something of a negative Nancy. “The questions were annoying,” the scribe said. “They are always annoying.”

Kelly finally called on the Brazilian reporter, who asked, “The tweets. Do they get you by surprise?”

This was Kelly’s chance to respond to the many rumors and stories that have suggested that Kelly has Trump on a militant schedule that does not include letting Trump aide Omarosa Manigault wander into the Oval any time she wants to rile Trump up. He had also allegedly been restricting the president’s media diet to pubs that don’t necessarily include The Daily Caller and Breitbart News.

“I restrict no one, by the way, from going in to see him,” Kelly said. “I was not sent in to control him. You should not measure my job as chief of staff by what you think I should be doing.”

But there will always been doubters.

“Seems like main purpose of this (& most WH press conference)is to say president didn’t mean what he said, critics are liars & press is evil,” Washington Post columnist David Rothkopf snarled on Twitter.

At least one reporter in the briefing room looked at Kelly like he was a cut of ribeye.

“It was better,” a male reporter said when asked to review Kelly’s performance at the briefing. “He called on people who are not his favorites. He gave actual answers that weren’t predictable. He was better looking, too.”

The reporter also had advice for my story: “Say something demeaning about her.”

But another journalist was less enamored.

“Honestly I wouldn’t say it was different,” the reporter said anonymously. “I like hearing from a wide range of officials.”

At the close of the presser, Kelly left the reporters with one last thought.

Even after he was gone, some reporters were still calling after him.

When Kelly was fully out of eye shot, Daily Mail‘s Francesca Chambers opened her mouth and shouted at the top of her lungs, “WILL YOU BE HERE FOR THE NEXT SEVEN YEARS?”

She was, of course, asking him to respond to Trump’s claim that this is the best job Kelly has ever had and that he’ll be around here for the next seven years.

“He’ll be here, in my opinion, for the entire remaining seven years,” Trump said.