Oliver Stone expressed sympathy for what Harvey Weinstein is going through, saying the movie mogul “shouldn’t be condemned by a vigilante system.”

Weinstein has been accused by multiple women of sexual harassment and sexual assault.

“I’m a believer that you wait until this thing gets to trial,” Stone told the media at the Busan International Film Festival in South Korea. (RELATED: Ed Asner Asks Chris Jansing For Kiss During Weinstein Interview) 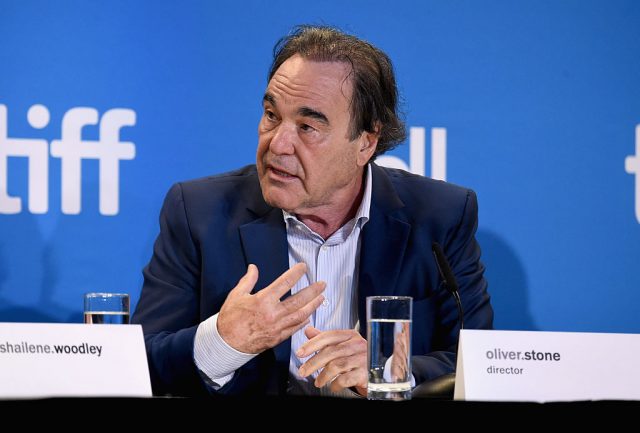 “I believe a man shouldn’t be condemned by a vigilante system,” he added. “It’s not easy what he’s going through, either. During that period, he was a rival. I never did business with him and didn’t really know him.”

When Stone was asked if he was familiar with the rumors about Weinstein’s alleged misconduct, he pivoted and said there were “horror stories” about everyone in the industry.

“I’ve heard horror stories on everyone in the business, so I’m not going to comment on gossip,” the “JFK” director shared. “I’ll wait and see, which is the right thing to do.”

The New York Times and the New Yorker have both reported on the accusations facing the film producer.

WATCH KIMMEL TURN HIS WEINSTEIN MONOLOGUE INTO AN ANTI-TRUMP DIG:

On Thursday, the New York Police Department told Fox News  that it is looking into the allegations against Weinstein stemming from an alleged 2004 incident. A short time later, London police confirmed they are also investigating claims of sexual assault.

In response to Stone’s defense of Weinstein, former Playboy playmate Carrie Stevens told the New York Daily News, that the director grabbed her breast at a party in 1997 and was very “cocky” about it.

“He was really cocky, had this big grin on his face like he was going to get away with something,” Stevens said. Adding that he just walked up to her and “reached out and…honked it like a horn.”

The playmate said others saw it happened, but “that’s what’s going on in Hollywood. That’s why things have to change. He’s Oliver Stone. Nobody’s going to say anything.”

Update: This story has been updated to include Carrie Stevens accusations of sexual assault against Stone.