Media Matters chief David Brock uses one of D.C.’s top Democratic fundraising firms to support nearly all facets of his network’s campaign to unseat Republican lawmakers, impeach the president and monitor conservative causes around the nation.

Mary Pat Bonner, a former aide and fundraiser for former Vice President Al Gore, heads an independent political consulting firm in Washington, D.C., that has annual contracts with a number of Brock’s organizations that pay her firm millions for fundraising services, according to IRS and Federal Election Commission (FEC) filings. In exchange for drumming up big donations, Bonner’s firm earns well into the seven figures.

While The Bonner Group is a completely independent entity, it claims the same address as many of the groups in Brock’s network, which are situated just over a mile from the White House and the U.S. Capitol in two floors of an office building in northwest D.C.

Bonner’s services do not come cheap. Her firm typically takes a 12.5 percent cut of the total amount it fundraises for a vendor. If Bonner musters up $1 million behind your cause, you owe her firm $125,000.

Two of the primary arms of Brock’s political apparatus — American Bridge 21st Century and Correct The Record — were The Bonner Group’s top customers in the 2014 and 2016 election cycles, paying out roughly $6 million, according to FEC filings. American Bridge 21st Century PAC is Bonner’s top publicly reported client dating back to 2012 and has provided Bonner’s firm with over $5 million in business, according to FEC filings.

Brock’s American Bridge 21st Century PAC lists defeating Trump, “either through impeachment or at the ballot box,” among its top initiatives through the 2020 election cycle. It also committed to changing “the balance of power by measurably impacting US Senate, gubernatorial, and state legislative races.”

American Bridge 21st Century PAC touts $311,685,223 worth of TV airtime for Bridge-research and video content since 2011, according to a leaked memo from Brock to PAC donors obtained by The Washington Free Beacon. The PAC also reports over 18,000 stories placed based on Bridge research since 2011.

Mary Pat Bonner, Media Matters and David Brock did not respond to The Daily Caller News Foundation’s requests for comment. 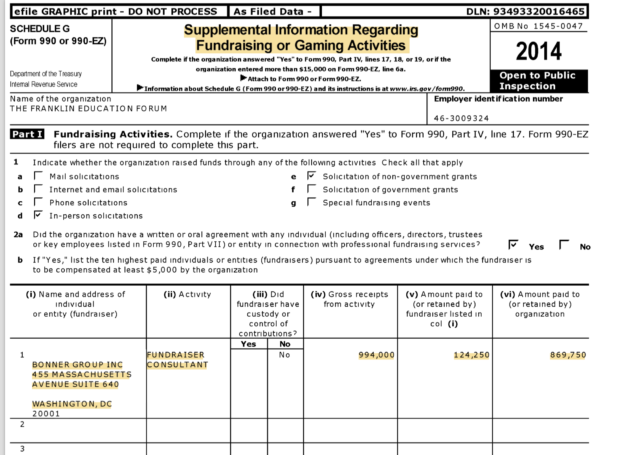 Franklin Education Forum then granted $816,224 to the Franklin Forum, which also contracts The Bonner Group for fundraising services.

The Daily Caller News Foundation was not able to obtain Franklin Forum’s 2014 Form 990s, but its 2015 IRS filings show that it paid $104,088 to The Bonner Group for its fundraising services. 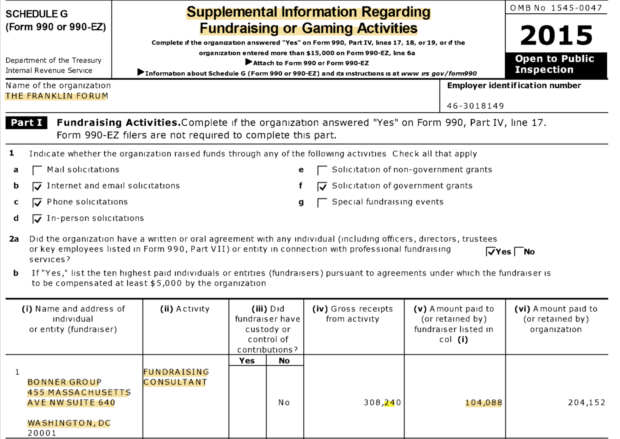 Bonner is making money almost every step of the way through raising funds for one of the most powerful liberal political networks in the country. Brock’s organizations do everything from crafting talking points, research and rapid response for progressive candidates to waging a campaign to impeach President Donald Trump.

Brock and Bonner at one time had adjacent offices and even shared a timeshare for a house in the Hamptons, The New York Times reports. The Media Matters chief also credits Bonner’s firm for helping his network reach their goals.

Bonner’s firm has a fundraising database of over 70,000 names that it uses to rake in millions for not only Brock’s organizations, but also for other progressive initiatives and super PACs, like Ready for Hillary (now Ready PAC), a pro-Clinton PAC dedicated to helping former Secretary of State Hillary Clinton win the White House in 2016.

Brock currently faces an FEC complaint for the way money makes its way from one of his organizations to another.

TheDCNF was the first to report in early October that Brock is facing an FEC complaint alleging he oversaw a sleight of hand operation to obscure who is donating money to a super PAC in which he has a vested personal interest. (RELATED: David Brock Allegedly Running A Slush Fund)

American Bridge 21st Century did not respond to request from TheDCNF for comment.

The complainant, Andrew Kerr, claims the nonprofit overpaid the super PAC for work done on behalf of the foundation — an action that the complaint alleges may violate FEC regulations and federal laws governing fraud and contribution reporting requirements. In other words, the complainant is alleging the foundation is apparently transferring donations to the political action committee in the form of compensation for work done through shared employees.

If Kerr’s projections are correct and the foundation amounts to a slush fund for the super PAC, it could call into question a number of entities in Brock’s political network.