The National Football League total viewership across the board for the 2017-2018 season is down 7.5 percent compared to the 2016-2017 season, ESPN.com reported Wednesday.

According to Nielsen numbers, the NFL audience for the current season through the first six weeks sits at an average of 15 million people, compared to last season at the same time which saw 16.2 million people tuning into the games.(RELATED: NFL Ratings Tank–Worst Viewership In Nearly Two Decades) 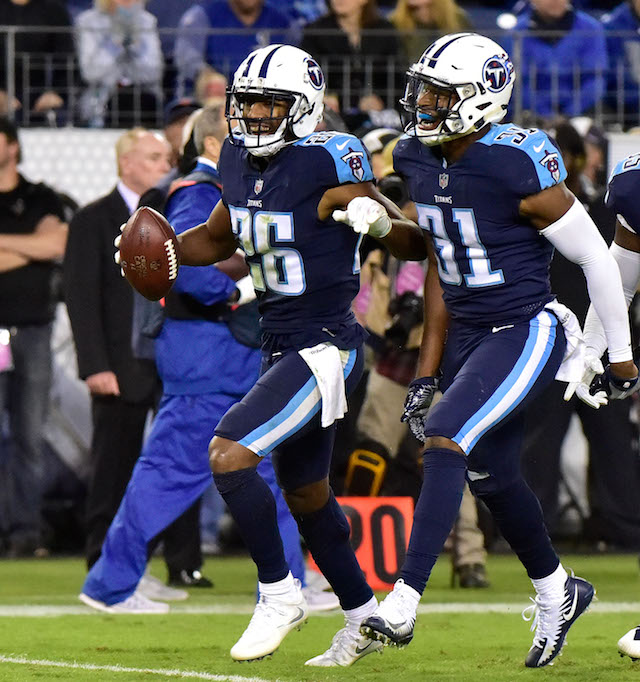 NASHVILLE, TN – OCTOBER 16: Kevin Byard #31 and Logan Ryan #26 celebrate after recovering a fumble against the Indianapolis Colts during the second half of a 36-22 Titan victory at Nissan Stadium on October 16, 2017 in Nashville, Tennessee. (Photo by Frederick Breedon/Getty Images)

In the last week, Credit Suisse lowered its price targets on stocks for both CBS and Fox, citing the decline in NFL ratings as the reason.

Through the first six weeks of games, “Monday Night Football” viewership is averaging 11.2 million viewers, that’s just 6 percent higher than last year’s numbers at the same time. Compare those numbers with the NFL season of 2015 through week 6 and the ratings are down 18.7 percent.

Last year, the league blamed the lower numbers for the first nine weeks of games on the presidential election coverage. This year the league can point to the national anthem protests as a possible reason, something that even President Donald Trump has weighed in on several times.

“The NFL has decided that it will not force players to stand for the playing of our National Anthem. Total disrespect for our great country,” Trump tweeted Wednesday.

The NFL has decided that it will not force players to stand for the playing of our National Anthem. Total disrespect for our great country!