VICE journalist Sam Kriss is a known quantity on social media due to his outspoken support of feminism, and often violent views against capitalism. A woman alleged the UK-based white knight sexually assaulted her Tuesday in a lengthy Facebook post.

Kriss did not deny the charges and has admitted wrongdoing.

The post, which was shared on the Facebook community “Monitoring the left’s support for rape culture,” and titled “#MeToo and Sam Kriss” elaborated in detail about Kriss’ sexual harassment and what the author described as “sexual aggression.”

Speaking to BuzzFeed, a source from Vice said that the outlet has decided to stop commissioning work from Kriss, following the allegations.

In the wake of the Harvey Weinstein sex scandal in Hollywood, numerous women (as well as a few men) have come forward with allegations against their abusers in the #MeToo hashtag on social media.

The author publicly recounted the “humiliating and degrading experiences I was dealt by Sam Kriss.”

She said that on her third date with Kriss, he behaved as if he were entitled to her body. In many instances, Kriss allegedly forced his tongue into her mouth, grabbed her butt and breasts, and even twisted her neck to force a kiss. “This physically hurt,” she wrote, adding that he made these maneuvers multiple times throughout the night, in public. He also commanded her to drink alcohol despite her repeated refusals.

“I had hoped I would never have to write this account,” she began. “But watching a man who repeatedly groped me, twisted my neck to forcibly kiss me, ignored any attempt I made to stop him, and refused to ‘let me’ drink non-alcohol, unashamedly attack feminists online, use misogynist language, singling out women for ridicule time and time again, means I’ve not really been able to forget.”

The groping and grabbing continued through the night’s end, when she tried to get away from him. He tried to coax her to going back to his house for sex.

A vocal socialist, Kriss often portrays himself as a champion of the left, and a member of the working class. The author claims that he tried, and failed to use his parents’ big house as leverage for sex. She wrote:

When I returned I sat away from him. Then the various manoeuvres to get me to go home with him began. I want to relay precisely how he first suggested this because it demonstrates a willingness to laud wealth (and thus power). Sam said, “so do you want to come back to mine to see my massive house?” “Don’t you mean your parents massive house?” “Yeah, but when they die I’ll inherit it”

The author said that once Kriss realized she wasn’t going to go home with him, he began forcing himself on her. “He began forcibly ‘snogging’ (I can hardly call it kissing given it was so aggressive) me at the bus stop,” she wrote. “I turned my head away so it was out of reach, to which Sam started grabbing at my breasts with both hands. There were, rather mortifyingly, other people at the bus stop trying to ignore this scene.”

In response, Kriss, a freelance journalist with regular bylines on VICE and The Atlantic, admitted his wrongdoing. His “apology” was riddled with half-baked explanations and justifications for why he thought it was okay to manhandle her in public.

“I’d like for a moment to add some conext to the events described, which I hope will make them more explicable if not more excusable,” [sic] he wrote. “By the time of the night described in the accusation, she and I had, as she mentions, previously met twice and we had an existing sexual relationship. The behaviour she describes was informed by that fact.”

Twitter was not kind to him. Even Donald Trump Jr. has become aware of the story. 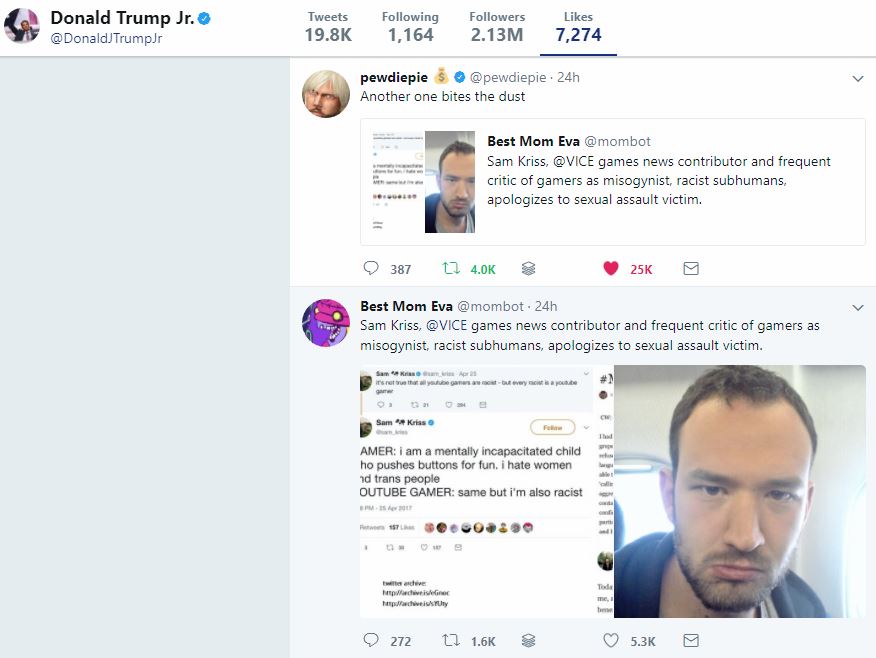