Brian Kilmeade, co-host of “Fox and Friends,” told The Daily Caller that while he is aware that Donald Trump watches Fox News, the president’s attention is not a deciding factor on what stories his show covers.

Kilmeade is the author of the newly released book “Andrew Jackson and the Miracle of New Orleans.”

“What you write does make a difference,” Kilmeade stated. “What you say matters all the way up to 1600 Pennsylvania Avenue.”

When asked if Trump watching Fox News affects its content, Kilmeade responded, “No. … We think we do the stories that matter most. You know, for the most part, Donald Trump has been part of 95 percent of the biggest stories in this country for the last year and a half.”

The “Fox and Friends” co-host said that guests may “want to get to the president. I don’t really see the ulterior motive. I’m sure it’s out there. I’m sure they know it — that a lot of times they’ll be watching, at any time he could be watching.” 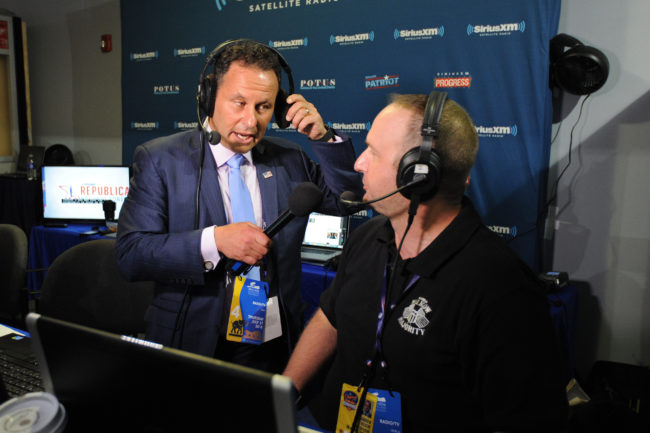 Brian Kilmeade, co-anchor for Fox News Channel, interviews Andrew Wilkow during an episode of his show The Wilkow Majority on SiriusXM Patriot. (Photo by Ben Jackson/Getty Images for SiriusXM)

The president is known to be critical of mainstream media outlets. He recently tweeted, “With all of the Fake News coming out of NBC and the Networks, at what point is it appropriate to challenge their License? Bad for Country!”

With all of the Fake News coming out of NBC and the Networks, at what point is it appropriate to challenge their License? Bad for country!

“There’s no way he actually means it,” Kilmeade said about Trump’s licensing statement.

Kilmeade also discussed his new book on Andrew Jackson and the Battle of New Orleans. His inspiration to write about “the battle that shaped America’s destiny” derived from an interest in underplayed or unappreciated historical accounts.

“So I thought, people always said the War of 1812, I feel this is totally under-appreciated,” Kilmeade stated. “The more I researched it, the more fascinated I was, because we beat the world’s number one economic and military power.”

There are a few similarities between both Trump and Jackson as well, according to Kilmeade. “Both were obsessed with the media. Both think they are getting a raw deal from the media.”

“After a while, [Jackson] got so frustrated that he hired a good reporter that he liked, to put out White House news, put out news from the presidency because he wanted to tell the story, and Donald Trump also feels extremely frustrated with the media,” Kilmeade continued.

“Andrew Jackson and the Miracle of New Orleans” is available for purchase now, and you can buy it here.