Libertarian nonprofit The Atlas Society (TAS) says its Instagram page, which it used to post political content and promote its work, was taken down roughly a month ago with little to no explanation in an apparent act of censorship. Now, it’s ready to sue, if need be.

In an attempt to get its account back, which is highly important for its ability to advertise the organization and engage with followers, The Atlas Society reached out to Instagram in early September. The organization’s CEO, Jennifer Grossman, said communications with Instagram inexplicably ended in an abrupt fashion after some confusion of the proper username for the account ensued.

The Daily Caller News Foundation spoke to several representatives at both Instagram and Facebook, which purchased the other social media platform for $1 billion, to get to the bottom of the situation. Following a great deal of back-and-forth, including providing evidence that their account existed, an Instagram official told TheDCNF that TAS’s account was deleted by an administrator of the official “@atlassociety” account some time around three years ago.

Utterly perplexed by the information relayed to them, Grossman and her small staff provided TheDCNF with files that prove the account existed within the past three years, something that naturally wasn’t difficult for them, but probably should have been given to Instagram in the first place.

TheDCNF then transferred the evidence to an Instagram employee, who has said multiple times after several inquiries that they plan on investigating, and subsequently responding.

TAS’s Instagram account at time of publication is still down and unavailable to the many users who appreciated content of both real and fictional libertarians, like Ayn Rand quips, and quotes from the Parks & Recreation character Ron Swanson. 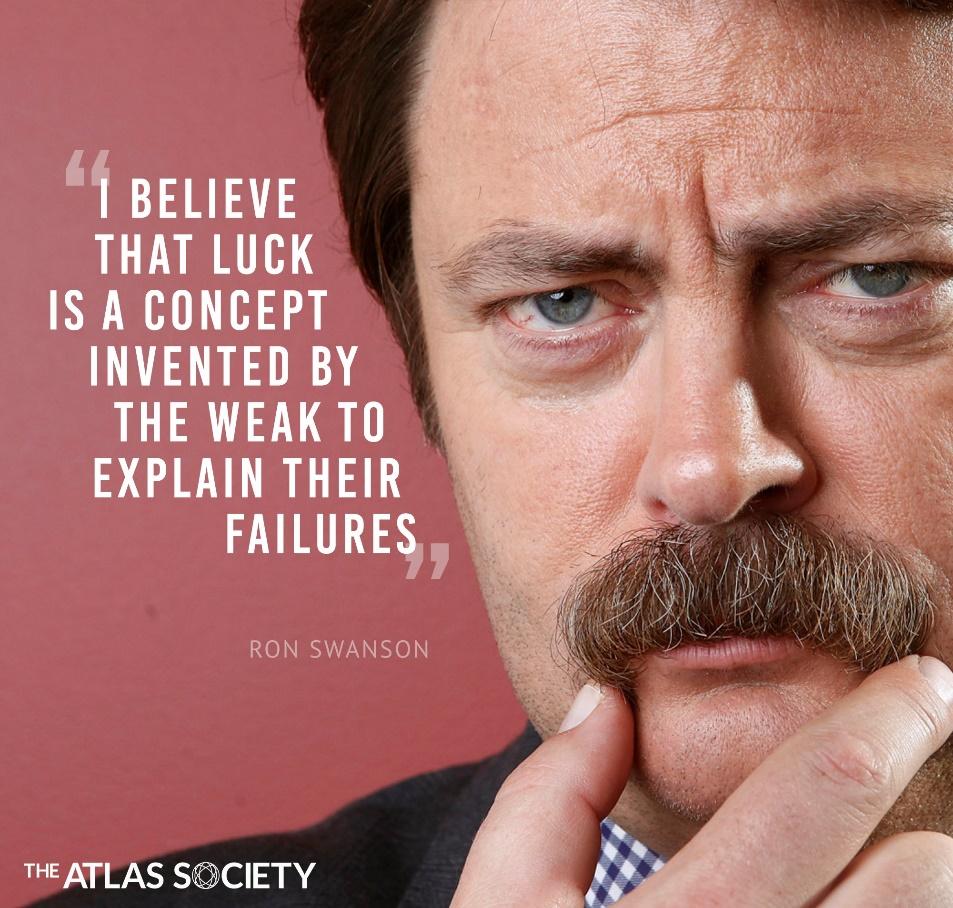 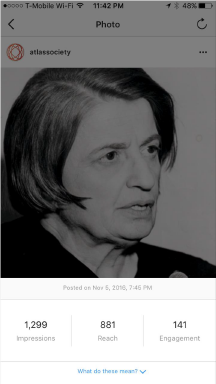 “Is it fair that a non-profit that works for 17 months, creating content, hiring staff, in order to create a community and promote its messages and engage with users — and succeeds wildly, becoming the most popular Instagram in the liberty space — is it fair that that all the money and hard work gets wasted and hijacked?” Grossman told TheDCNF. “No, it’s highway robbery. And it’s not just the sunk costs of the resources we invested there — it’s the opportunity costs of how we might have invested donor cash differently — and certainly would have, if we knew we were putting that investment at the whim of capricious, dishonest social media companies.”

Grossman says she is fairly certain they didn’t violate any of Instagram or Facebook’s policies or conditions, and that the whole ordeal reeks highly of an Orwellian situation.

She cited portions of George Orwell’s book “1984,” a classic reference for libertarians, since it details a fictional world with highly overbearing institutions. She also explained the premise behind the 1944 movie “Gaslight,” in which a narcissistic man goes out of his way to portray a fraudulent account of certain events for his wife, causing her to go crazy in the process.

Grossman asserts that her organization’s situation is somewhat analogous, in which Instagram controls the information behind their social media account, and can say whatever they want regarding the details behind it.

Determined not to be part of the worst aspects of literary or cinematic dystopia, Grossman said she is ready to take whatever means necessary to get her Instagram account back, including legal recourse.

“If we can’t get answers by engaging in the routes that Instagram itself advertises as being the recourse for consumers, then we will try to get answers through the discovery process,” she said. “We’ve suffered significant economic damage by being denied access to the area where we do business. We’re in the idea business, and this is our marketplace.”

Prior to leading TAS, Grossman worked in several different industries. She worked as education policy director for the libertarian-leaning think tank Cato Institute and a presidential speechwriter in the White House during the George H. W. Bush administration. She also served as the senior vice president for Dole Food Company, a powerful agriculture corporation, for roughly 10 years.

“I’m a business person, I spent most of my career in companies where you take your products to market — via roads, rivers, rails, etc. Well, Instagram is the road by which we were conveying our products — memes that communicated our particular (and granted, not always popular) point of view,” she explained. “Now we’re denied access to that road — and therefore to our consumers — because allegedly we’ve breached the contract (terms and conditions).” 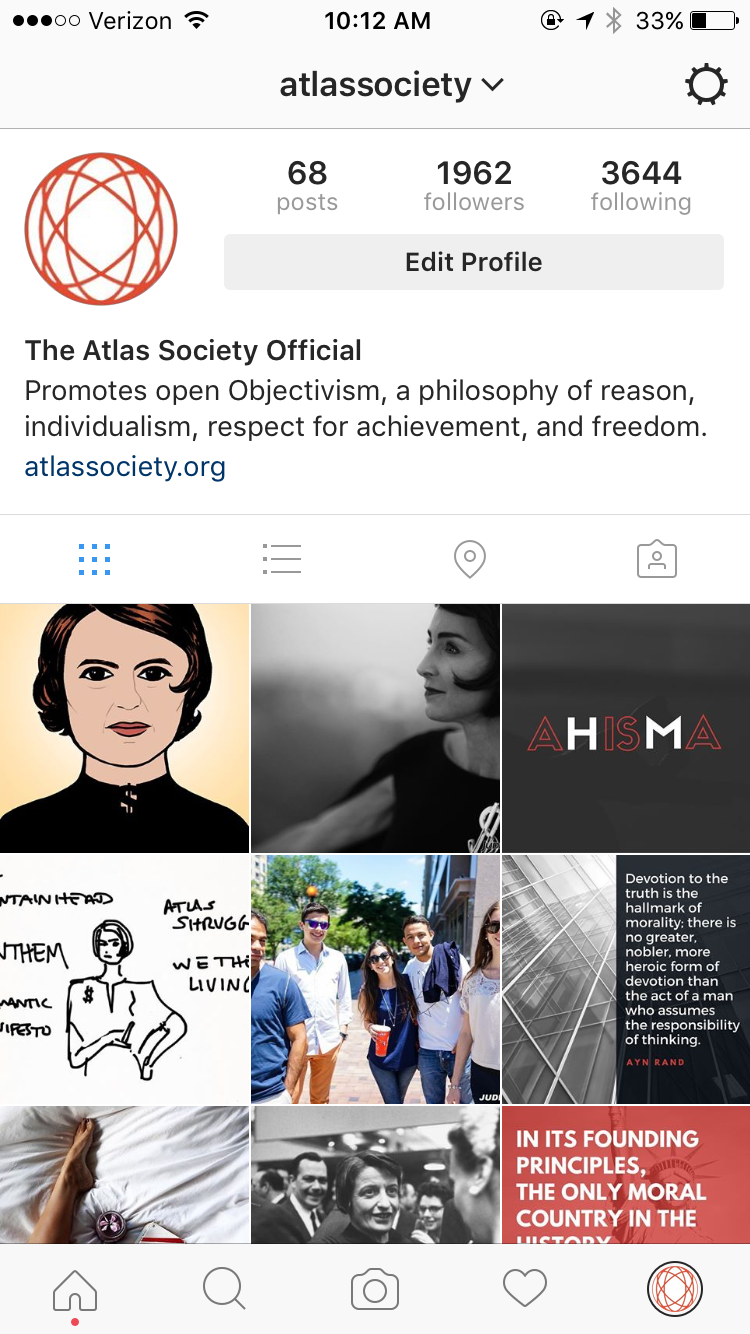 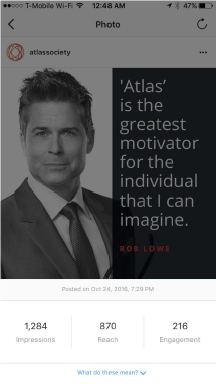 If TAS actually broke the terms of conditions, or that was even alleged, isn’t clear. As mentioned before, the main point of contact at Instagram originally told TheDCNF that an operator deleted the account three years ago, but then said it could be due to a technical bug that was discussed only with TheDCNF. The official did not provide in-depth details of the purported defect, but contended that, due to the automated system, it sometimes can lead to inadvertent removal of certain accounts. She said that they have a large amount of humans who assist their algorithms, but that they mostly rely on the technology due to the countless amount of requests they receive, which sometimes leads to inundation.

Silicon Valley, and specifically social media companies and other tech platforms like Facebook, Twitter and Google, have been accused of instances of censorship on several occasions.

YouTube, which is owned by Google, has been reportedly demonetizing and censoring videos from content creators deemed too controversial for the platform, negatively affecting a lot of conservatives and independents.

And it’s not just unique to that part of the political spectrum (although that’s where it seems most prevalent). Anti-corporate voices across ideological lines are also claiming that Google is attempting to silence them for their political positions.

On the far-left, for example, the World Socialist Web Site is claiming “a 70 percent drop in referrals from Google searches” and that the site’s “news articles and essays on politics, history and culture are being systematically blocked.” The group believes that a Google algorithm change in April led to its content being blacklisted.

More recently, Twitter blocked a campaign advertisement for Republican Rep. Marsha Blackburn of Tennessee. Blackburn, who is running for Senate, claims in the campaign video to have “stopped the sale of baby body parts,” as she chaired a House panel investigating the purchases of fetal tissue by Planned Parenthood. A representative for Twitter later told Blackburn’s vendors that the ad was removed Monday because the lawmaker’s description of fetal tissue is considered “an inflammatory statement that is likely to evoke a strong negative reaction.” Twitter later reinstated the video, but fell short of completely conceding that it was a wrong move, saying it may “refine” some of its policies. Even Facebook COO Sheryl Sandberg — who openly opposes Blackburn’s stance on abortion — disagreed with Twitter’s original decision, arguing that “when you cut off speech for one person, you cut off speech for all people.”

Google has also been accused of censorship, not just with a direct user of its platform or services, but for employees both internal and external. The tech company fired one of its software engineers, James Damore, after he wrote a 10-page memo to employees that enumerated a number of “Google’s biases” and alleged that “honest discussion about these biases is being silenced by the dominant ideology.”

Damore, who participated in a Ph.D program in Systems Biology at Harvard before going to Google, proved to be prescient in his allegations. Despite the potential accidental clairvoyance behind Damore being fired while saying “honest discussion … is being silenced,” Google CEO Sundar Pichai explained his termination by asserting that “we strongly support the right of Googlers to express themselves, and much of what was in that memo is fair to debate, regardless of whether a vast majority of Googlers disagree with it.”

Google’s censorship may go beyond its own company or subsidiaries. A former analyst at the Google-funded think tank the New America Foundation claims he was fired for writing a statement that was critical of Google, causing an onslaught of bad press for the corporation.

While a lot of these instances of alleged censorship are due to the tech companies’ belief that certain content or actions cross the line of what is reasonable or acceptable, TAS’s posts — at least the ones still viewable through the organization’s record-keeping — are innocuous, albeit perhaps contentious depending on the beholder’s personal political views.

Regardless if TAS’s account removal was due to a flaw in the system, or a purposeful action by an employee, it still shows an ever-growing pattern for such companies to limit who can post and say whatever rather than cultivating a platform with completely free expression, devoid of censorship.

Nothing seems more telling of this swelling shift than Zuckerberg’s gradually reinforcing opinion on the matter. Facebook has been vamping up its “fake news” battle for some time, first hiring a former CNN anchor to lead its newly established news partnerships team, as well as a New York Times veteran to head its news products division. These additions were some of the first examples of Facebook capitulating to clamoring that certain content on the platform swayed the election in favor of one candidate over the other, with several technical changes and extra features coming soon after. Rather then going on a censorship spree, many of the moves appeared to be way to acquiesce the demands of the public, as well as some of the highest public officials.

In fact, Zuckerberg’s reticence, despite apologies and claims that he’s “dedicated” to the cause, has manifested itself on a number of occasions. Zuckerberg reportedly declined proposals from fellow shareholders during an annual meeting to be more aggressive in battling false news on the platform, likely out of fear of losing the platform’s ostensible ethos of free expression. Facebook also publicly denounced a new German law set to force social media companies to remove content considered to include hate speech or misleading news because, for one, “it would have the effect of transferring responsibility for complex legal decisions from public authorities to private.” And while Zuckerberg made a pledge to protect “election integrity” after essentially being coerced to hand over evidence of Russia ads on the platform to congressional investigators, he still chose to defend his company on several occasions, even referencing key points that the ads likely had little effect on the election. (RELATED: Judge Napolitano: ‘FB Can Do Whatever They Want, But Censorship Is A Very Dangerous Business’)

Zuckerberg’s fairly subtle reservations about getting aggressive with accounts and content on the platform show the difficult positions in which these tech companies and leaders are placed. It seems as if Facebook-owned Instagram, whether they accidentally or intentionally removed TAS’s account, may almost perfectly exemplify the consequences of going too far — it’s just not clear yet whether those repercussions negatively affect them, or just its users.