The group conducted a public opinion phone survey of 1,211 people and found that more people are showing an interest in baseball and the upcoming championship series than the National Football League. Additinally, results show more Republicans right now favor the MLB, while more Democrats favor the NFL. (RELATED: NFL Ratings Drop After Day Of Protest) 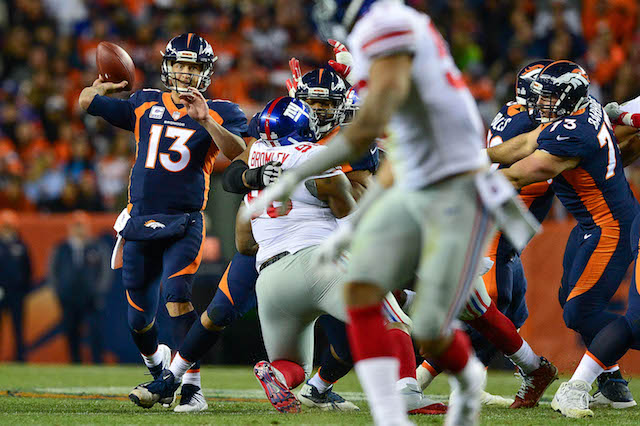 DENVER, CO – OCTOBER 15: Quarterback Trevor Siemian #13 of the Denver Broncos passes against the New York Giants during a game at Sports Authority Field at Mile High on October 15, 2017 in Denver, Colorado. (Photo by Dustin Bradford/Getty Images)

WATCH THE STEELERS STAY IN THE LOCKER ROOM FOR NATIONAL ANTHEM:

The survey found that 60 percent of those interviewed viewed the MLB as favorable, with only 11 percent who viewed it as unfavorable. Of those who participated, 30 percent said that baseball was their top professional sport, with only 25 percent saying that football was theirs. The NBA, NHL and then MLS followed next in the list of top sports.

A total of 61 percent of those respondents said that the baseball playoffs have been very interesting or somewhat interesting leading, with 29 percent who felt that they have not been interesting at all.

Going inside the numbers, Republicans and people who identified themselves as non-partisan preferred baseball over the NFL 30 percent to 21 percent. Democrats, on the other hand, preferred football over the MLB 33 percent to 29 percent.

1
Adam Schiff: Removing Trump Urgent Because He’s ‘Threatening’ To ‘Cheat In The Next Election’
Politics
2
'We Just Saw The Pictures': Chris Wallace Challenges Hakeem Jeffries' Claim That Souvenir Pen Ceremony Was 'Solemn'
Media
3
Elizabeth Warren Questions If Americans 'Want Someone Who Lies To Them'
Politics
4
Lindsey Graham Unloads On Pelosi: She 'May Pray Privately, But She's Orchestrated The Trial Of Holy Hell'
Politics
5
Bully Spits On And Pushes An Injured Kid. He Gets Hit With Some Instant Karma In Unbelievable Video
Editorial