The prestigious Cambridge University in England is being encouraged to replace Caucasian authors with black writers following demands by a student campaign to “decolonize” English classes.

Following new guidance provided by the English Faculty’s Teaching Forum, professors in Cambridge have been told to “ensure the presence” of black and minority ethnic (BAME) authors in their courses.

The campaign to “decolonize” the curriculum began with an essay by Lola Olufemi, a Cambridge University Student Union’s women’s officer. The open letter, which was published on the Internet, received more than 1,000 signatures from members of campus and made its rounds on the Internet.

“For too long, teaching English at Cambridge has encouraged a ‘traditional’ and ‘canonical’ approach that elevates white male authors at the expense of all others,” the letter said.

“What we can no longer ignore, however, is the fact that the curriculum, taken as a whole, risks perpetuating institutional racism,” she said, demanding the inclusion of “two or more postcolonial and BME authors” in all exam papers.

At present, Cambridge students study a range of “period papers” from the 1350s to the present day, including the works of William Shakespeare.

Campaigners argue that the English courses focus too much on white authors — who have been predominantly the creators of English literature — at the cost of authors from non-white backgrounds. They also claim that what they call a “limited perspective” is shaped by colonial ideologies.

To address these concerns, the Teaching Forum recommends adding an introductory lecture that offers “perspectives on the global contexts and history of English literature.”

Privamada Gopal, a teaching fellow at Churchill College and fellow of the Teaching Forum described the motion as a “good start.”

“I think it is important, however, to view the ‘inclusion’ of postcolonial and BME texts not as an endpoint but the beginning of a discussion about what ‘English literature’ is and what exclusions it has always relied on,” he said. “The curriculum first needs to make empire, race, identity more central than it has been – something students HAVE to engage with rather than are ‘allowed’ to engage with.”

Gill Evans, emeritus professor of medieval theology and intellectual history at Cambridge University has voiced her concerns with the move, saying that the approach is going to create “major problems.”

Speaking to the Telegraph, she described the move to “decolonize” English as part of a wider movement to stop teaching Western and European history.

“If you distort the content of history and literature syllabuses to insert a statistically diverse or equal proportion of material from cultures taken globally you surely lose sight of the historical truth that the West explored the world from the sixteenth century and took control – colonially or otherwise – of a very large part of it,” she said. “It is false to pretend that never happened.”

Since news of the demands blew up in the UK press, Cambridge University has released a statement denying that they have any plans to follow through with the Teaching Forum’s recommendations, and that they do not plan to drop any one author in favor of anyone else. 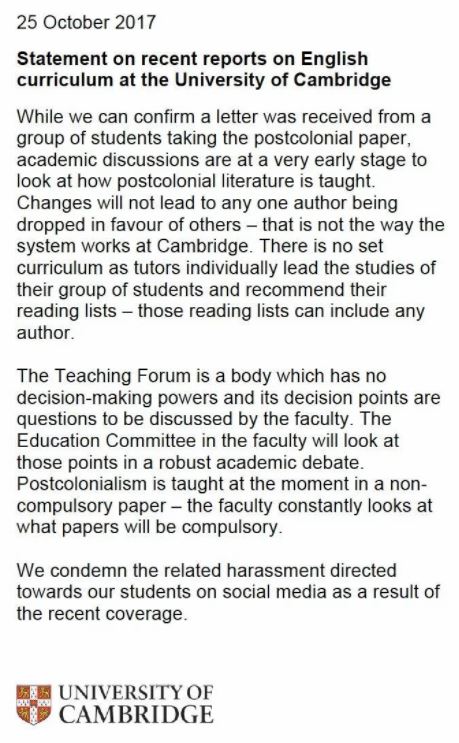