Secret Service Agent Clint Hill was 31 years old when he performed the single act that would be the defining moment of his life.

He was in Dallas that day when bullets flew into President John F. Kennedy‘s motorcade and struck the president twice. First lady Jacqueline Kennedy was next to him.

Which is where Hill comes in.

Hill was assigned to the first lady’s security detail.

With what he believes was “divine assistance,” he got to her in time to physically push her back in her seat and shield her and the already dying Kennedy to protect her from danger.

Hill will speak at the American Veterans Center Conference in Washington on Saturday, which is why he agreed to do this brief 15-minute interview. According to the center’s website, the three-day event will host talks with America’s most decorated veterans and active duty personnel from World War II to the present day.

I asked him about the risk involved in performing such a feat.

“Well, if you’re in the armed forces you have that same risk,” he reasoned, adding that he served in U.S. Army Counterintelligence for three years. “That’s part of the risks of the job. You understand that going in — we just accept that.”

When he was Jacqueline Kennedy’s Secret Service agent, did he think about the risk involved in doing the job and the fact that on any given day he could die?

“If you dwell on that, you can’t do your job,” he said. “If you do your job to the best of your ability, things usually turn out OK.”

Hill grew up on the Missouri River in Washburn, North Dakota, and planned on a more ordinary life of a history teacher and athletics coach. He went to Concordia College in Moorhead, Minnesota. “They say that I am now teaching history talking about my life as a Secret Service agent,” he said. “Maybe I am relaying historical events.”

He is also an orphan — according to online reports, he was put into an orphanage at three months old and adopted by a family in Fargo.

How did the first lady treat him after the incident?

“Oh, she thanked me all the time, continuously,” he recalled. “She wrote notes at the end before I left her protective assignment thanking me.”

He has no doubts that the JFK files should be opened.

“I think that they should be released and made available to the public — the sooner the better,” he said.

How about those conspiracy theories?

“That’s all theoretical; it is not factual,” he said. “You can discard all of that information because it’s just not fact. Thus far, no fact, all theory.”

The guilt that Hill still feels about that deadly day in Dallas is palpable.

“Well, I tried my best to provide protection for the first lady and the president, but unfortunately I got to the vehicle in which they were riding just after the president had been hit for the second time,” he said. “I have a sense of guilt about that that I should have gotten there quicker and that I am not faster than a speeding bullet.”

He says, “Maybe [I had] some divine assistance. … I really look at that sometimes and say I don’t know how the heck I did that.” 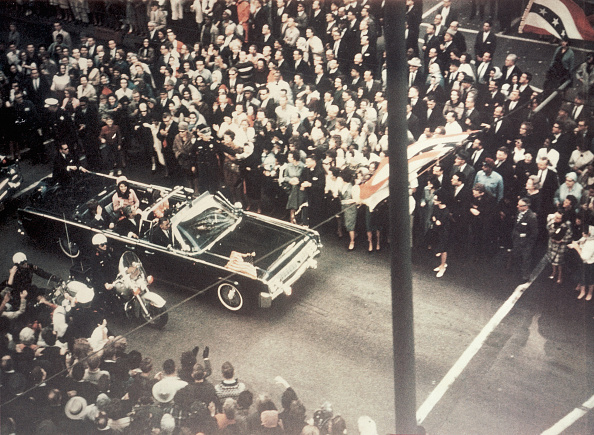 President John F. Kennedy, First Lady Jacqueline Kennedy, and Texas Governor John Connally ride through the streets of Dallas, Texas prior to the assassination on November 22, 1963. Included as an exhibit for the Warren Commission. (Photo by © CORBIS/Corbis via Getty Images)

In the years before and after the assassination, Hill hit the skids. “I had some emotionally troubling times,” he said.

Which was putting it mildly. He explained to me that you can’t go through watching the tragedies that the Kennedys endured without it affecting your heart. They lost their young son, Patrick. Then two months later the president was killed.

“Those were very difficult times,” he said.

After he left the first lady’s detail, he admits he self-medicated with alcohol. “Yes, there were nightmares,” he recalled, explaining that he had a tough time sleeping due to extreme depression.

He says his PTSD lasted until the early 1980s, at which point a doctor friend of his came to me and told him he had a choice to make: You either live or die.

“I went cold turkey — no alcohol, no tobacco,” he said. “I began working out. I’m 85 years old and still upright. I’m very fortunate.”

Hill says he was raised in an extremely conservative family. When asked if that is political or otherwise, he replied, “In every sense of the word.”

He seems a bit more varied in his religious views: “Christian and Catholic at the same time,” he said.

When I ask for his views on Trump, Hill is pretty reserved. “Oh, I’ve never met him,” he said. “He’s the only president since Harry Truman that I have no met. It will probably come to pass.”

He doesn’t seem terribly excited about an upcoming meeting.

Does he think Donald Trump is a good president?

As for that defining moment in 1963, he knows it will never leave him.

But he seems more at peace with it now.

“It will never leave,” he said. “It’s embedded in my brain so it will always be there and I understand that.”