To be sure, Diet Coke should not be rushing to sign up Mark Halperin for ad royalties.

In a stunning op-ed in WaPo late Friday, one of the five women who accused the Game Change author of sexual harassment — and in some cases, assault — when he worked at ABC, came clean about her own experience with Halperin.

Five women anonymously told CNN their stories earlier in the week in a piece published Thursday.  One of those women is standing by her story with her name.

Between CNN and The Daily Beast, about a dozen women have accused Halperin of sexual harassment and sexual misconduct. Some of the women allege that he assaulted them.

One America News Network-affiliated journalist Emily Miller has claimed that Halperin has “attacked” her when she worked at ABC. But besides lashing out at him on Twitter, she has not detailed a specific incident. On Twitter she said she was “embarrassed” and “scared” and therefore didn’t report him to ABC.

On Friday afternoon, Halperin released a lengthy statement of regret.

But first let’s look at what Lara Setrakian, executive editor of News Deeply, had to say about her Mark Halperin experience back in 2006.

She said she had to “overcome the pleas” of her family to tell her story.

Halperin’s apology was more than she expected. And yeah, she wants more.

“Halperin needs to take responsibility for his actions, and I would like to know how he plans to make things right,” she wrote in her WaPo piece.

Here’s the gist of what she says happened to her:

“I felt like an idiot walking out of Halperin’s ABC News office in November 2006. He was running our midterm election coverage; I was assigned to it as a junior reporter, one year into my job. He praised my professional work and invited me to his office to talk politics over a Diet Coke. When I got there, he kissed me and touched me inappropriately. I left that room shaken. I told some trusted colleagues but didn’t directly file a complaint. I was worried about the consequences of speaking out — just as many of my colleagues still are today.”

And here is Halperin’s so-called apology and statement: 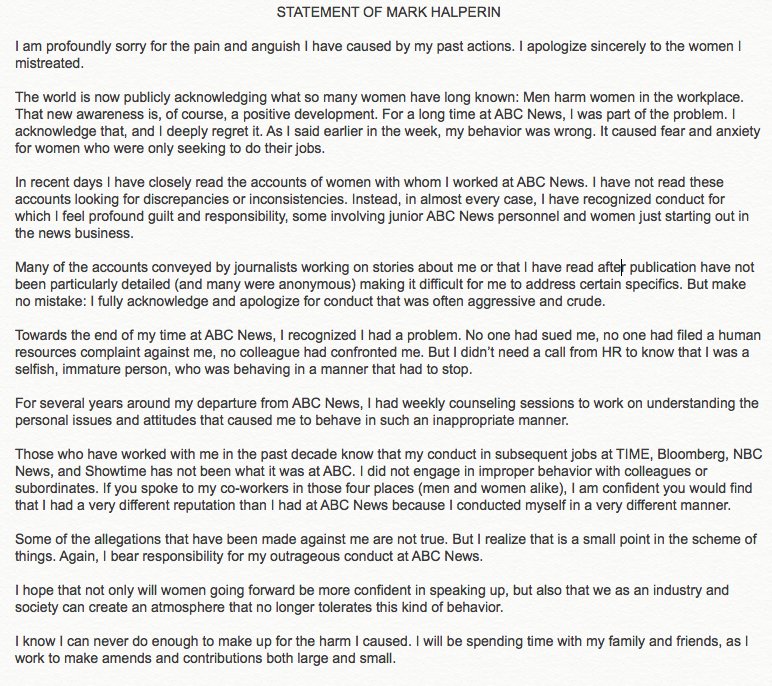