The MLB ratings for game 3 of the World Series dropped by 16 percent compared to last year, yet viewers are still tuning in by record numbers, according to the Hollywood Reporter.

The return home to Texas turned out to be good news for the Houston Astros, who beat the Los Angeles Dodgers 5-3 Friday night to pull ahead in the series 2-1.

The game scored a 10.4 overnight rating and a 19 share among households, with 13.78 million viewers and a 3.4 rating among adults ages 18-49. (RELATED: The World Series Ratings Just Topped The NFL For The Second Time Ever) 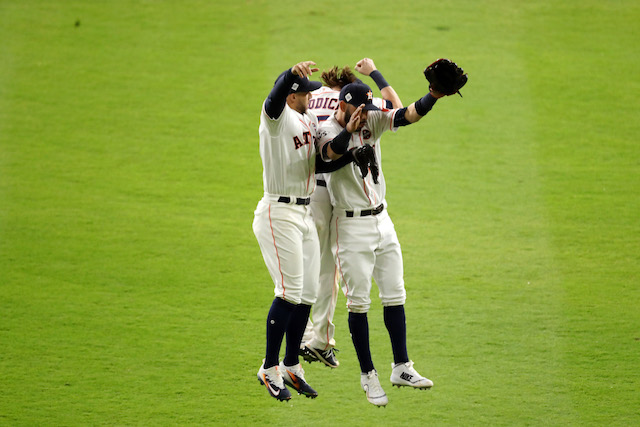 Marwin Gonzalez #9, Josh Reddick #22 and George Springer #4 of the Houston Astros celebrate after defeating the Los Angeles Dodgers in game three of the 2017 World Series at Minute Maid Park on October 27, 2017 in Houston, Texas. The Astros defeated the Dodgers 5-3. (Photo by Christian Petersen/Getty Images)

In comparison, game 3 last year between the Chicago Cubs and the Cleveland Indians scored a 12.4 overnight rating, with 19.4 million viewers and a 5.2 rating in the key demographic.

While last night’s game fell short of the historic 12-year high from last year, the series is still off to the second best start for Major League Baseball since 2009.

Game 2 of the series in Los Angeles went to the eleventh inning, with the Astros coming from behind to win 7-6 over the Dodgers and tie up the series. The night earned 11.0/20 in metered market results.