Sixty-seven percent of Down syndrome pregnancies are terminated each year in the United States, a statistic that pro-life organizations are determined to fight.

One part of that fight happens during “Down Syndrome Awareness” month each October, where various organizations gather to celebrate those with the chromosomal condition and work to raise awareness of their lives. While the month is a great way to celebrate, pro-life organizations stress that this is an issue that they focus on throughout the year, not just in October.

“Feminists for Life certainly celebrates Down Syndrome Awareness month, but Feminists for Life works on this all year,” Serrin Foster, president of FFL, told The Daily Caller News Foundation. “This isn’t just something we do for the designated month.”

Foster’s group launched a social media campaign aimed at showing how people with Down syndrome still enjoy their lives, arguing against aborting Down syndrome pregnancies and warning about the ethics of targeting such pregnancies. 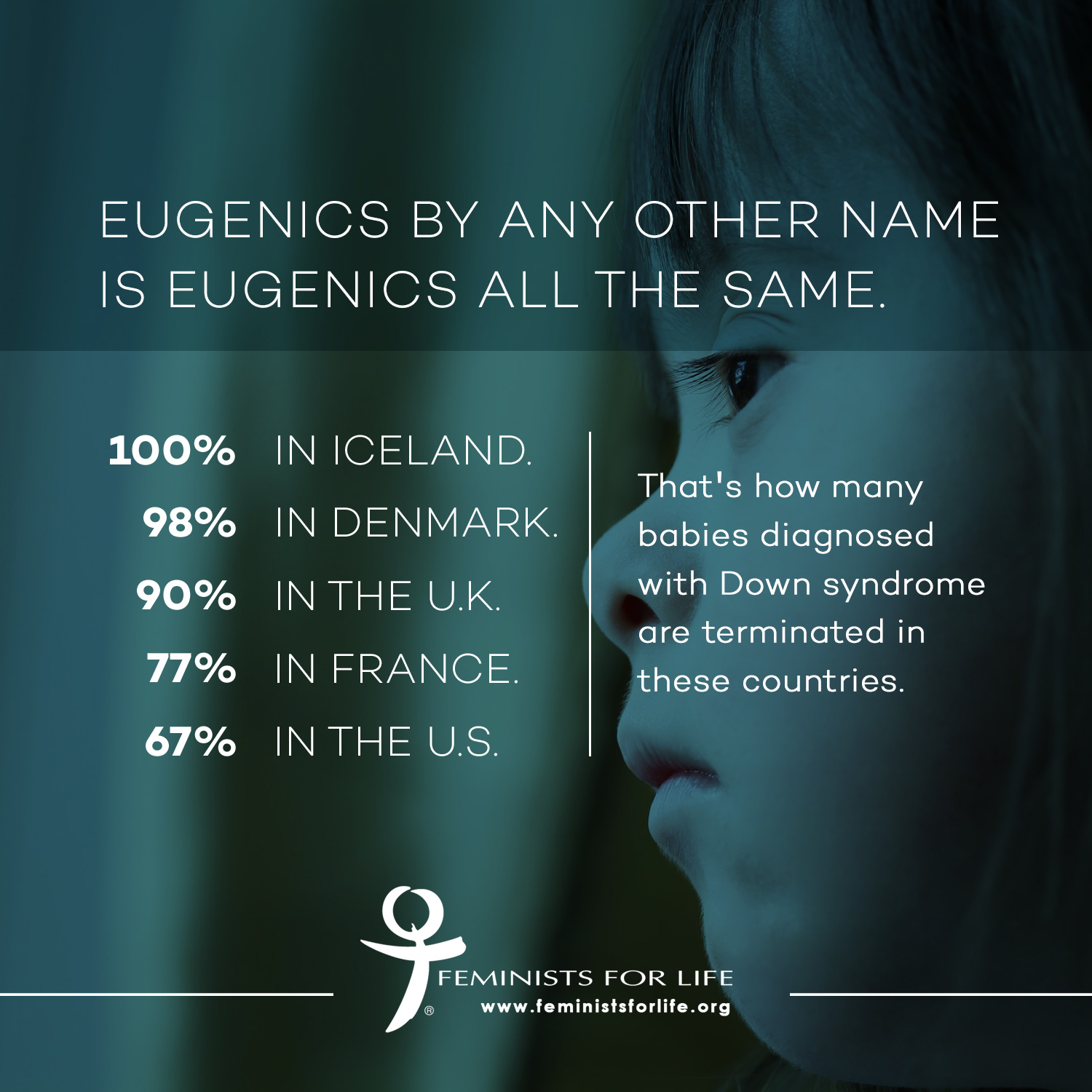 “Killing the most vulnerable demonstrates true poverty by wealthy countries and in many hearts,” one reads, while another one says “We won’t hurt you, why would you terminate us?” 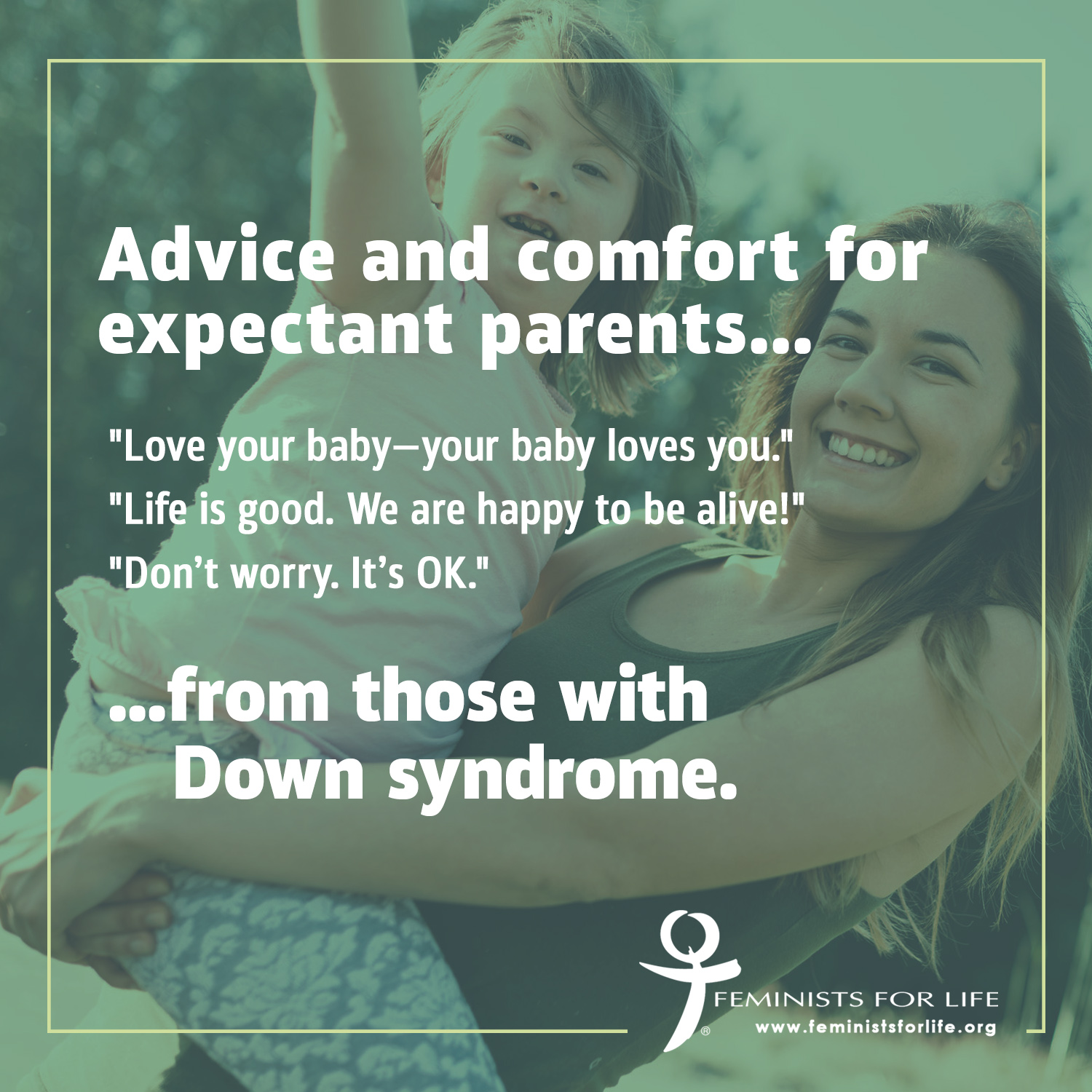 Each year, one out of 700 babies in the United States are born with Down syndrome — a total of 6,000, according to data from the Center of Disease Control. Pregnant women ages 35 or older have a higher risk of giving birth to a child with Down syndrome. While the chromosomal condition comes with various complications like heart defects, cataracts and hearing loss, the average life expectancy has shot up over the years.

The National Right to Life Committee (NRLC), the nation’s oldest pro-life organization, works throughout the year to protect all pregnancies, regardless of any complications they may have, NRLC President Carol Tobias told TheDCNF. The NRLC hosts “Keep Infants with Down Syndrome” (KIDS), a January reception, to allow Down syndrome children to meet each other and hang out, as well as allowing their families to get to know each other, Tobias told TheDCNF.

“We want the reception to be a time of support and encouragement for the families of children who are often marginalized in society, but pro-lifers likely receive the greater benefit, getting to meet and enjoy time with the delightful kids that come,” Tobias noted, adding that the attendance has grown over the years.

NRLC adopted a hashtag this month, #LifeIsBetterWithYou, which was created by KIDS co-founder Eileen Haupt. The group tweets out pictures of happy Down syndrome children.

The NDSS also tries to provide support and information about the struggles of raising a child with Down syndrome, providing resources on education for those with the chromosomal condition, health care, employment opportunities and how they can become make enough money for themselves.

“Most importantly, we give parents a way to connect with their local Down syndrome organization and other families to find support in their communities. We want families to know that the Down syndrome community is comprised of an incredible community of individuals and families,” NDSS President Sara Hart Weir told TheDCNF.

Some pro-life organizations have also worked on legislation to preserve Down syndrome pregnancies as states and countries have been grappling with abortion legislation for years. Some countries have begun to exterminate those with Down syndrome — Iceland allows abortions on fetuses after 16 weeks if the mother learns the child has the condition. As as result, almost 100 percent of women who have received a positive test for the condition have chosen to abort their pregnancies.

“Somebody who is diagnosed with Down syndrome, they don’t deserve a death penalty. Their parents deserve better as well. It’s an enormous loss and a terrible pressure they’re putting on these parents,” Foster said to TheDCNF.

Various NRLC chapters worked on legislation to ban abortions in states. The Ohio state legislature is in the process of considering a bill that would take away a doctor’s medical license if they try to induce or terminate a Down syndrome pregnancy. Other states like, Arizona, have laws on the books that prevent abortions based on a genetic problem.

“One’s bodily development or lack thereof should not determine their conception or dictate what a person is going to accomplish in their life. We all know, anybody who has been touched by a child or adult with Down syndrome, knows how loving they are. We find that we are the ones who truly receive,” Foster told TheDCNF.