President Trump whisperer Roger Stone says he’ll march into court and sue Twitter after the platform booted him for taunting a couple of CNN anchors.

Keep in mind, lawsuits can be mind-bleeding trying endeavors.

Social media troll Charles Johnson, who was bounced off Twitter in 2015, planned to sue a man who had accused the infamous ginger of being a child molester on Twitter. For years now, he has been pursuing litigation against the now defunct Gawker for implying that he pooped on the floor in college (he’s still pursuing this lawsuit to the tune of $1.5 million).

But this is Roger Stone. And Stone has fans lurking in weird places.

Roberts informed Richardson that Twitter had banned Stone this weekend.

Still, Stone cares. He doesn’t want to be silenced. And he’s planning to sue. He told TheWrap that he has obtained “one of the best” telecommunications lawyers in the country and plans to take legal action against Twitter for infringing on his first amendment rights.

“To be clear my criticism of Don Lemon had nothing to do with Mueller’s leaked indictments but rather than his nonsensical claim that the Clinton’s have been cleared in the Uranium One scandal,” Stone told The Mirror by text. “It’s funny people on twitter threaten to kill me, my wife , my children and even my dogs, but they are not banned.”

Here’s what Twitter had to say to Stone about his suspension. 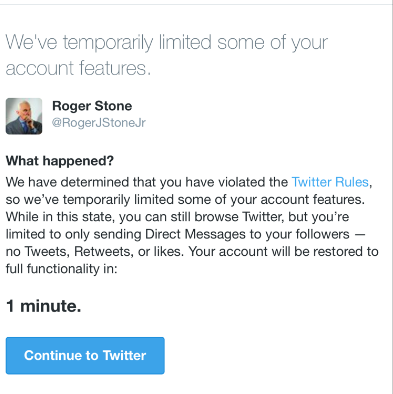 Stone said Twitter had only banned him for three hours and 12 minutes.

But that deadline came and went and Stone’s account is still dead.

Or “suspended” as it says when you try to open his feed.