At least eight people were killed and numerous injured in Lower Manhattan Tuesday afternoon in what Mayor Bill de Blasio called “an act of terror.”

NYPD officials confirmed that the attacker drove a truck onto a bike path, hit several people and a school bus before opening fire. First responders are currently swarming the site, an eye witness told The Daily Caller News Foundation. The attacker is now in the hospital and in police custody. NYPD confirmed at a Tuesday press conference that the man yelled “allahu akbar” while being apprehended and authorities found evidence indicating loyalty to ISIS. FBI agents have also opened an investigation into the terror attack, according to CBS.

Police identified the shooter as 29-year-old Sayfullo Habibillaevic Saipov of Tampa, Florida. After crashing his truck, the attacker leapt from his vehicle with fake guns and was immediately shot by a police officer.

Currently there is one person in custody. No others outstanding. All information is preliminary as the investigation is ongoing. pic.twitter.com/nsaUgZ8MJH

President Donald Trump addressed the terrorism on Twitter within hours of the attack.

In NYC, looks like another attack by a very sick and deranged person. Law enforcement is following this closely. NOT IN THE U.S.A.!

We must not allow ISIS to return, or enter, our country after defeating them in the Middle East and elsewhere. Enough!

My thoughts, condolences and prayers to the victims and families of the New York City terrorist attack. God and your country are with you!

The gunman has been treated for a gunshot wound and is still in the hospital. Two others hit by the vehicle are in NYC operating rooms and at least two other victims are in the hospital but in stable condition, police announced.

The terrorist reportedly rented the truck from Home Depot.

“It appears to my uneducated eye that it was absolutely an attack,” an eyewitness told TheDCNF. “I’m 100 percent. The attacker hit several direct targets on the bike path. There is no doubt in my mind.”

The attacker drove “at least half a mile” down a two-way bike path near the World Trade Center memorial, hitting several bikers. 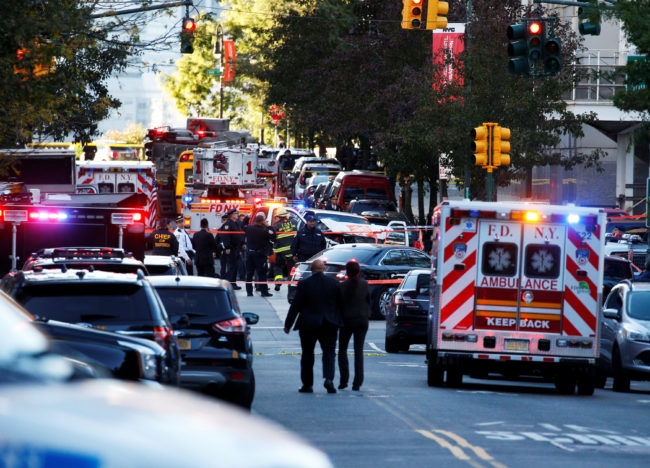 A Home Depot truck which drove down the bike path alongside the West Side Highway at full speed and hit several people is seen as New York city first responders are at the crime scene near a bike path in lower Manhattan in New York, October 31, 2017. REUTERS/Brendan McDermid

An eyewitness claims the attacker exited the vehicle near the Goldman Sachs building. Com systems in at least one nearby building alerted those inside to an ongoing security event.

SWAT officers reportedly clear several of the lower buildings on the nearby waterfront and cordoned off the area in order to capture anyone fleeing the scene, the source said.