The mysterious professor who former Trump campaign adviser George Papadopoulos claimed offered him “dirt” on Hillary Clinton last year is denying the allegations, calling them “incredible” and a “laughingstock.”

Joseph Mifsud, an honorary director of the London Academy of Diplomacy at the University of Stirling in Scotland, is acknowledging to The Telegraph (U.K.) that he is the professor referenced in court papers unsealed on Monday in the case against Papadopoulos. 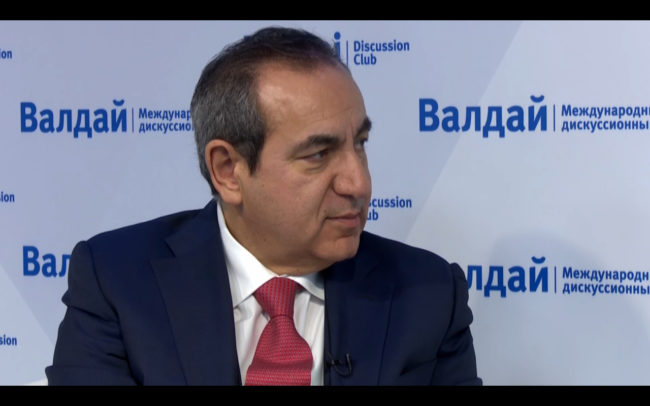 The 30-year-old energy consultant pleaded guilty earlier this month to lying to the FBI during interviews in January and February about his contacts with a professor, a female Russian national and a person who described themselves as having contacts in Russia’s Ministry of Foreign Affairs. (RELATED: Trump Campaign Adviser Pled Guilty To Lying About Russian Contacts)

Papadopoulos was arrested at Dulles airport on July 27. He accepted a plea deal from Robert Mueller’s Office of the Special Counsel on Oct. 3. In the interim, Papadopoulos was working as a “proactive cooperator” for the FBI and Mueller’s team, which is conducting an expansive investigation of Russian interference in the presidential campaign. (RELATED: Trump Campaign Adviser May Have Been Wearing A Wire)

In a statement of offense for the case, Papadopoulos claimed that he met an unidentified professor on March 14, 2016 during a trip to Italy. That was eight days after Papadopoulos had been notified that he was being brought onto the Trump campaign as a volunteer foreign policy adviser.

Papadopoulos said that he continued meeting with the professor in London. He also says that the academic introduced him to a female Russian national who claimed to be a niece of Russian president Vladimir Putin’s. Later on, the professor introduced him to someone who claimed to be affiliated with Russian’s foreign ministry. That person has since been identified as Ivan Timofeev, a senior official with the Russian International Affairs Council (RIAC), a think tank backed by the Russian government. (RELATED: How Did George Papadopoulos End Up On The Trump Campaign?)

Papadopoulos also told investigators about an April 26, 2016 meeting he had with the professor in London. Papadopoulos told the FBI that the professor claimed to have recently returned from a meeting in Moscow with “high-level Russian government officials” where he was notified that the Russian government had “dirt” on Clinton in the form of “thousands” of her emails.

Papadopoulos sent an email the next day to a senior Trump campaign official, saying that he had “some interesting messages coming in from Moscow about a trip when the time is right.”

In an interview with The Telegraph, Mifsud acknowledged that he is the professor who met with Papadopoulos. But he is denying several key allegations made by the young campaign volunteer.

He said that the claim that he introduced Papadopoulos to a female Russian national was “a laughingstock.” A former official with Malta’s foreign ministry, Mifsud also denied having any connections to Russian government officials.

“I have a clear conscience,” Mifsud told The Telegraph.

Mifsud’s denial raises numerous questions. For one, Mifsud appears to be downplaying his associates with Russians. In addition to his affiliation with Timofeev and RIAC, he is a member of the Valdai Discussion Club, a Russia-based group that hosts forums with prior approval of Russian president Vladimir Putin.

But Papadopoulos himself has also made questionable claims, and not just in his initial interviews with the FBI.

On Tuesday, President Trump blasted Papadopoulos, saying that the “young, low level volunteer…had already proven to be a liar.”

A footnote to the statement of offense says Papadopoulos was never introduced to the ambassador.

One element of the story that is beyond dispute is that Papadopoulos provided regular updates to Trump campaign officials about his interactions with Mifsud. Campaign emails referenced in the statement of offense show that some of those officials seemed open to Papadopoulos’ offers to arrange meetings between the Trump campaign and Russian government.

According to the statement of offense, Papadopoulos emailed Clovis and other campaign officials on March 24, 2016, offering to “arrange a meeting between us and the Russian leadership to discuss U.S.-Russia ties under President Trump.”

Clovis responded that he would “work it through the campaign.” He did not commit to the meeting, but told Papadopoulos, “great work.”

Over the next few months, Papadopoulos emailed Clovis, then-campaign chairman Paul Manafort, and then-campaign manager Corey Lewandowski, offering to set up meetings between the campaign and Russians.

After Papadopoulos proposed an “off the record” meeting in an Aug. 15, 2016, email, Clovis responded that he “would encourage” Papadopoulos and another campaign adviser to “make the trip, if it is feasible.”

The statement of offense said that the proposed meeting did not take place.