And suddenly, the Internet was ablaze. While legit news organizations covered the Hitler mention as cleanly as possible, others were more intent to launch into full-fledged Hitler-trutherism.

Here’s how it went down: An informant reported to the CIA that a man in Colombia greatly “resembled” the horrific dictator, and surviving Nazis in the region referred to him as “der Fuehrer,” according to The New York Post. The details don’t stop there.

The New York Post reported the following in part:

The source told the agent, whose code name was Cimelody-3, the former Fuehrer was alive and that an ex-SS agent named Phillip Citroen had been in touch with him in the city of Tunja, according to the memo, released as part of the files related to JFK’s assassination.

Citroen told the informant he saw a man who strongly resembled Hitler while working in “Residencias Coloniales,” a neighborhood populated by former Nazis.

The former SS agent also had a photo of himself with the suspected Hitler, who allegedly went by “Adolf Schritteimayor.”

The CIA was skeptical of the claim, but the photo from the file has been circulating Twitter over the past 48 hours.

The following two documents were pulled from the CIA’s files on JFK. 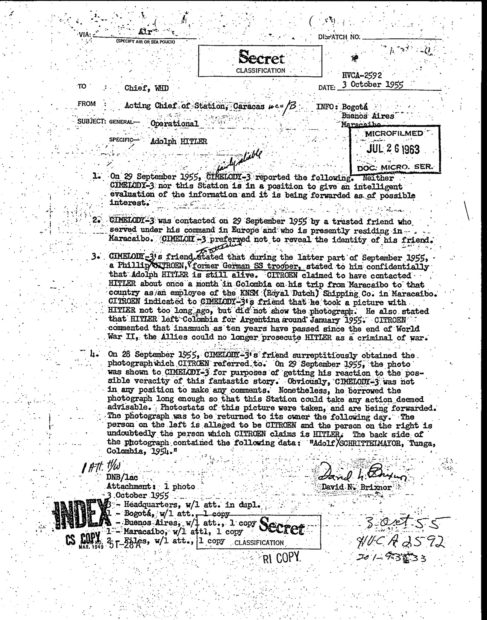 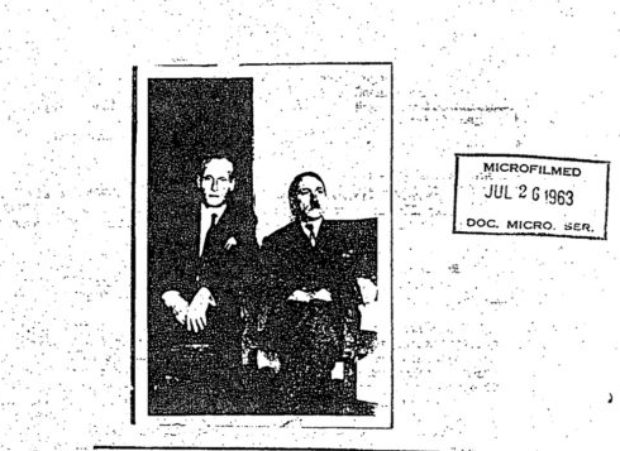 Something in the JFK docs that may interest you all.
Adolf Hitler stated to be alive in Colombia in 1955. pic.twitter.com/7ef6XilhwI

Nobody loves a great conspiracy theory like Americans do, and Hitler surviving World War II is a way more popular conspiracy theory than people realize. Alex Jones and the Reddit world jumped on this thing like a cold beer on a scorching hot summer day.

Tim Kennedy, the guy speaking with Jones, even hosted an entire show about finding Adolf Hitler. I interviewed him about his military experience a couple months ago. If there’s anybody who knows strategy and Hitler history it’s him. (RELATED: Watch TheDC’s Interview With Green Beret Sniper And Overall Bada$$ Tim Kennedy)

Of course, Jones and Reddit were hardly the only two entities to dig into these documents. There were multiple different media organizations that dove right in, including famous British tabloid The Sun.

I’m not sure the world can handle the idea that Hitler escaped to South America. It might literally break the internet. You can’t be a murderous dictator and then just hop on a submarine to South America. That’s not how it works. You get killed or kill yourself. That’s the natural order.

What would be really interesting is if documents are ever released showing that the CIA further pursued these claims. You can’t have reports of Hitler running around, and not have Delta Force out there looking for him.

In the aftermath of Germany’s surrender in 1945, western Allied forces suspected that Hitler had committed suicide but did not immediately find evidence of his death. At the time, it was feared that Hitler may have escaped in the closing days of the war, and searches were made to determine if he was still alive. FBI Files indicate that the Bureau investigated some of the rumors of Hitler’s survival.

We might be almost certain what actually happened, but that’s not going to slow down internet commenters and conspiracy theories from blowing up whenever there is new information.