Current odds have Penn State running back Saquon Barkley as the heavy favorite to win the Heisman Trophy.

Bovada currently has the odds set as follows:

It’s not a surprise that Barkley is leading the way. He’s had an incredible season so far for Penn State. The electric running back has been borderline unstoppable. A close loss against Ohio State still wasn’t enough by itself to derail his Heisman hopes. 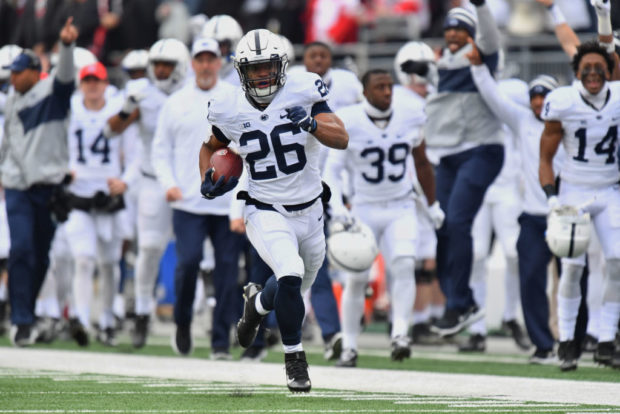 COLUMBUS, OH – OCTOBER 28: Saquon Barkley #26 of the Penn State Nittany Lions returns the opening kick off 97-yards for a touchdown in the first quarter against the Ohio State Buckeyes at Ohio Stadium on October 28, 2017 in Columbus, Ohio. (Photo by Jamie Sabau/Getty Images)

One name I’m shocked to not to see on this list is Wisconsin running back Jonathan Taylor. Through eight games, he’s on an undefeated team, and has ripped apart defenses. The freshman entered the season under the radar, so that makes sense to some degree. However, at this point there’s no reason for him not to be on the list.