U.S. wars since Sept. 11, 2001, have cost taxpayers nearly $4.5 trillion and may ultimately rise to $5.6 trillion, the Watson Institute of International and Public Affairs costs of war project estimates in a new report.

“The United States wars in Iraq, Afghanistan, Pakistan and Syria and the additional spending on Homeland Security, and the Departments of Defense and Veterans Affairs since the 9/11 attacks totaled more than $4.3 trillion in current dollars” since 2017, the report declares.

The report flies in the face of a recent Pentagon report, accurate to June 30, 2017, estimating the costs of the war at approximately $1.5 trillion.

The Watson institute report’s higher number comes from its more inclusive cost methodology. “The difference between this Costs of War Project estimate and other estimates is that it includes not only Pentagon/Department of Defense military spending, but other war related costs, including war-related spending by the State Department, the Department of Veterans Affairs, and Homeland Security,” the authors note. 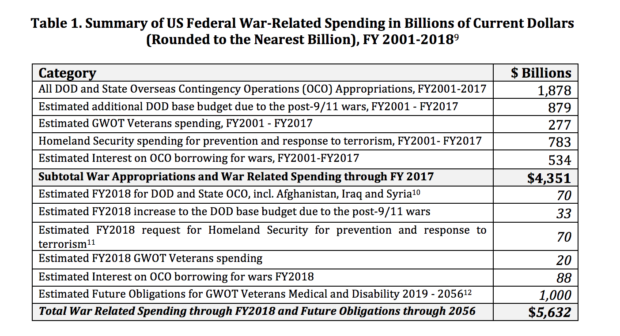 These figures are likely to only to increase in coming years given extended U.S. presences in Iraq and Afghanistan. The U.S. military has several thousand troops in Iraq battling the Islamic State. Despite successful efforts in recent months against the group, officials have indicated an extended troop presence is likely for some years to come to ensure stability in the region.

Pentagon dollars spent in Afghanistan are also likely to substantially increase after the President Donald Trump authorized the deployment of an additional 3,000 additional forces the country. Trump pledged to keep U.S. forces in Afghanistan until conditions on the ground merited withdrawal.